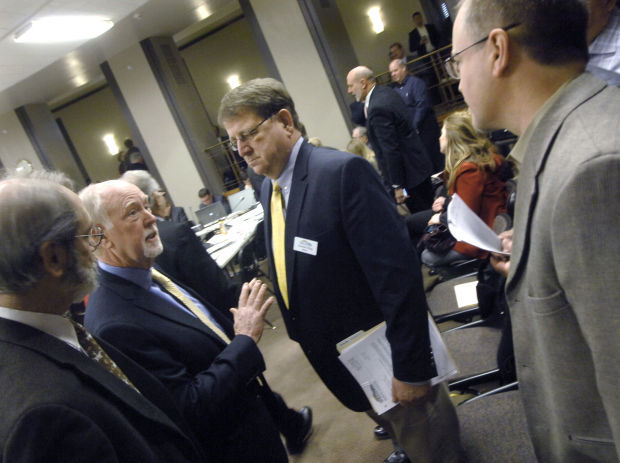 House Appropriations Committee members took up a more than $1.1 billion oil impact funding bill Wednesday that may see requests for an additional $173 million in amendments.

Committee members heard testimony from state officials and western North Dakota leaders on the need to expedite Senate Bill 2103, known as the surge funding bill. The Brynhild Haugland Room inside the state Capitol was filled with approximately 200 people.

House Majority Leader Al Carlson, R-Fargo, told the committee the bill was being moved along as quickly as possible. He said additional scrutiny of what oil patch communities plan to do with the money was needed in order to ensure the dollars are spent properly.

“This is about good management of the people’s resources,” Carlson said. “The Legislature understands the problem. This is a lot of money.”

Committee chairman Jeff Delzer, R-Underwood, sent a letter last week to oil patch cities, counties and townships requesting information in order to determine needs. Information requested included lists of projects communities for which they are planning to use the funding as well as shovel-ready projects.

“We do have some work to do to put this all together,” Delzer said.

Pam Sharp, director of the state Office of Management and Budget, proposed an amendment that would provide an additional $23 million in SB2103. The amendments were for $20 million in Housing Incentive Fund dollars, $2 million for additional Department of Health staff and $1 million for the law enforcement staff through the attorney general’s office.

The three items had been in SB2126, which died in the Senate. The items were placed in agency budgets, but Sharp said the money is needed sooner.

“It’s not just roads and infrastructure out there,” Sharp said.

A potential amendment may be coming from the Department of Transportation to increase the $300 million in highway funding to $450 million. DOT director Grant Levi said the agency is waiting to hold bid openings until SB2103 passes.

“We’re at a standstill right now. We need the early resources,” Levi said.

Among the oil patch leaders in support was McKenzie County Commissioner Ron Anderson, who said SB2103 would help make a dent in infrastructure needs this construction season.

“We have skin in the game. We’re just about out of skin. We need your help,” Anderson said.

Sen. Brad Bekkedahl, R-Williston, spoke on behalf of Williston as a member of its city commission. He said the city and state would save money by addressing needs through SB2103.

“The projects never go away. They just get bigger, and there are more of them,” Bekkedahl said.

Senate Majority Leader Rich Wardner, R-Dickinson, said he hopes SB2103 can be passed by crossover but acknowledged there are numerous moving parts.