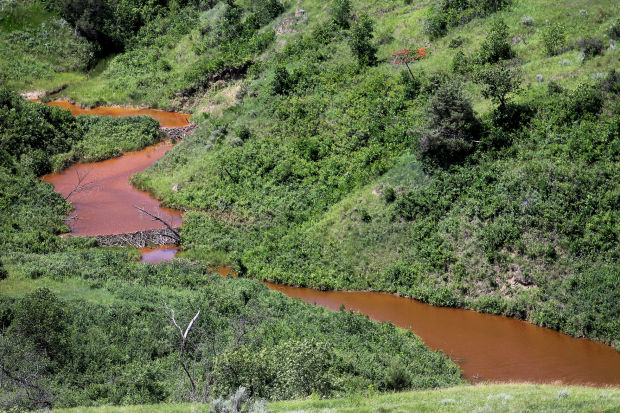 FILE – In this July 10, 2014 file photo, saltwater leaks into a stream from a massive saltwater spill from an underground pipeline on the Fort Berthold Indian Reservation near Mandaree, N.D. The environmental director of the American Indian tribe said he’s been shut out of the tribe’s response to the spill and criticized leaders for leaving the public “in the absolute dark” on its severity. (AP Photo/Tyler Bell, File)

WILLISTON, N.D.  — A pipeline near the town of Mandaree on North Dakota’s Fort Berthold Indian Reservation leaked 3,000 barrels of brine, state agencies confirmed Monday in the second such incident at the reservation by the same company in as many months.

The North Dakota Industrial Commission and the state Department of Health said the pipeline is operated by Arrow Water LLC, a subsidiary of Houston-based Crestwood Midstream Partners LP. The leak was discovered late Friday.

Also called saltwater, brine is an unwanted byproduct of oil production many times saltier than sea water. It is considered an environmental hazard by the state.

In early July, a pipeline operated by another Crestwood subsidiary leaked 1 million gallons, or 24,000 barrels, into the badlands near Mandaree. That incident was one of the largest oil field spills in state history. A barrel equals 42 gallons.

The brine from the July spill traveled nearly 2 miles down into a ravine, killing vegetation along its path. Crediting a series of beaver dams with helping stem the flow of the fluid, the company and Three Affiliated Tribe officials said the brine did not reach a tributary of Lake Sakakawea, a source of drinking water for the reservation.

The July spill has led to a criticism from tribal members upset over what they see as a lack of information from the tribes and Crestwood about an incident that may have threatened their water supply. No water test results have been made public.

There are few details about the latest spill. A spill report said soil and vegetation could be polluted. It adds that the spill has been isolated and cleanup crews have been mobilized.

The report also mentions that the area where the spill occurred slopes toward Skunk Creek Bay or a tributary. That bay is a tributary of Lake Sakakawea, but the Environmental Protection Agency says there is no threat to water resources based on the information they received on Friday.

Crestwood and tribal leadership did not immediately return calls from the Associated Press on Monday.