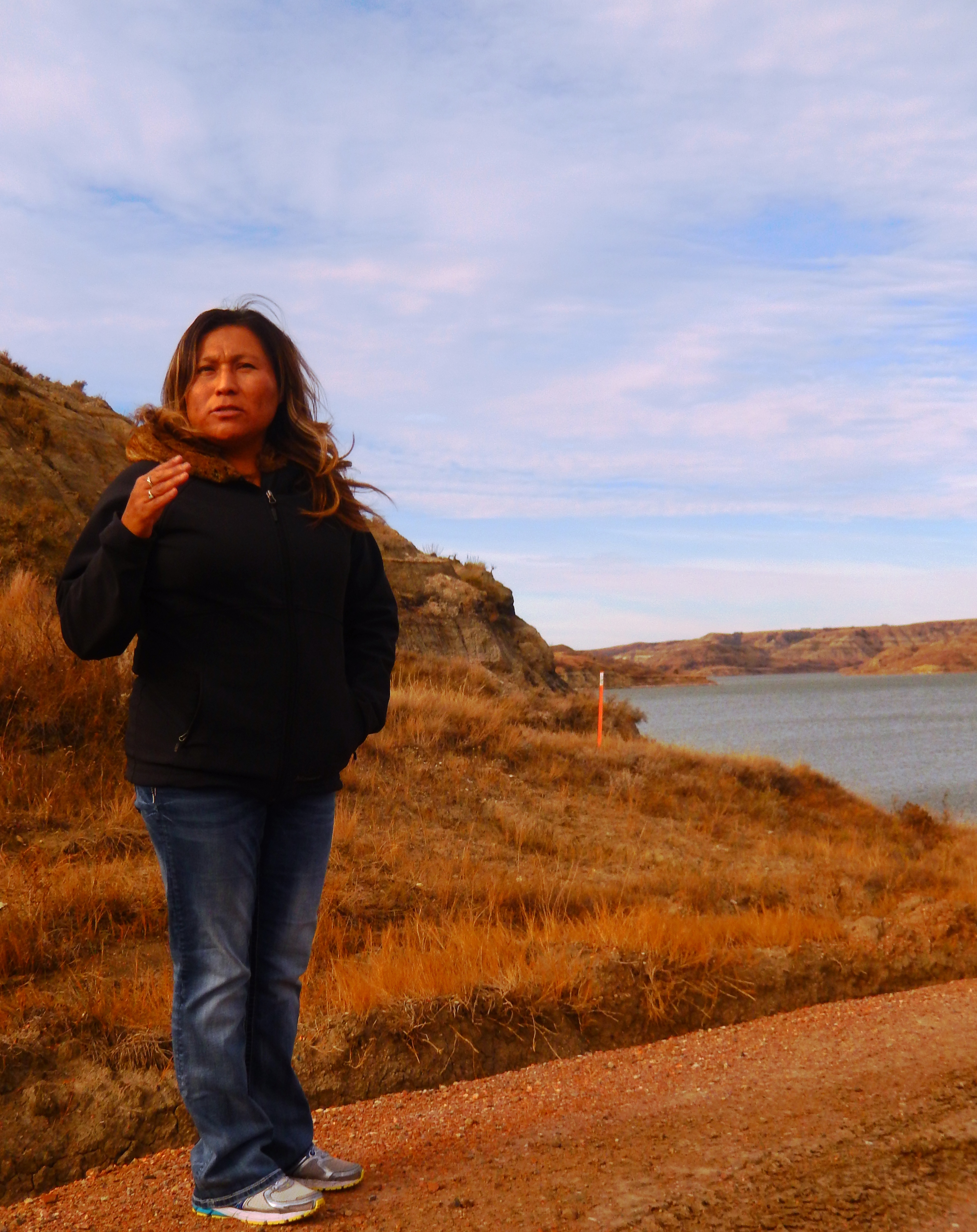 MANDAREE, N. D. –– It wasn’t until two years ago that the families in this rural community of 600 were able to connect to running supplies of drinking water. Today three tribal depots sell Mandaree drinking water from Lake Sakakawea, creating a source of income for the tribal government.

So in July when an oilfield pipeline rupture sent frac wastewater coursing down Bear Den ravine on the Mandaree segment of Ft. Berthold Indian Reservation at the center of the Bakken black gold rush, residents were not surprisingly concerned over the impact of the spill in the tributary to the lake on the Missouri River.

“As community members in Mandaree, that’s our water back there,” said resident and Environmental Science major Lisa DeVille. “But it could affect not only Mandaree, but also people across the river, down the river, people in White Shield, Garrison, Bismarck, and all the way down the Mississippi.”

Some 2 to 8 million gallons of water are used to frac one well, a massive dotation.

The use of fresh water and its depletion due to fracking “remains a very serious environmental threat. But it isn’t the only one,” says the Western Organization of Resource Councils (WORC), a multi-state umbrella association of grassroots non-profits.

So-called flowback water is used in combination with chemical agents to stimulate production from fracking wells. Its corollary, so-called produced water, rises to the surface from underground stores during production.Both are sullied with toxics, WORC explains in a report entitled “Watered Down: Oil & Gas Waste Production & Oversight in the West.”

The waste materials are stored in on-site pits or tanks, transported by pipeline or truck, and ultimately released by deep well injection or land disposal.“The produced water here is a big concern because of the large volumes being handled,” said Mandan Hidatsa & Arikara (MHA) Nation Energy Department Director Carson Hood.

He said the Three Affiliated Tribes (TAT) are in the process of trying to quantify the amount of produced water and determine an underground formation adequate to receive injections of the briny solution.

Due to reports of earthquakes caused by injection of frac water in other places, the tribes have been careful not to permit the practice to date, he said. The waste stream is being piped and reused.

Former Tribal Business Council (TBC) Chairman Tex Hall put out a news release stating that beaver dams on the tributary helped stop the oil from reaching the lake on the Missouri River.

After some jockeying for position between federal, tribal and state agencies, the TAT’s Natural Resource Department was put in charge of the long-term oversight of the situation.

However, tribal Environmental Department Director Edmund Baker said two months after the spill, his office had not received the test results to prove that there was no contamination of the lake and drinking water.“

The spill is located a quarter mile away from the Mandaree water intake system, which supplies the reservation its drinking water,” Baker said. “The tribe withholding the water testing results would lead anyone to infer that the spill did hit the lake,” he said.

The most likely source for receiving a full report may be an independent investigation undertaken by Vance Gillette, who is a former MHA Chief Judge. The investigation has the backing of the statewide non-profit Dakota Resource Council and the reservation organization SOAR, which stands for ‘Save Our Aboriginal Resources.

Gillette was on the scene from the early moments of the spill. “When I reached the site where the spill occurred, the water near the bay was a rusted color and the shoreline vegetation was dying,” he said.“From what I saw at the spill site, it is highly unlikely the results of the water tests will show no contamination,” he said.“

The toxic solution could contain petroleum, fracking residue, sand, water and other undisclosed chemicals that are pumped into drilling sites to help fracture rock formations. It is hard to say what exactly killed the vegetation surrounding the shoreline since production fluid elements are considered a trade secret,” he noted.

Frackers don’t have to report the chemicals in the waste stream as hazardous waste, thanks to the so-called Halliburton Loophole, which was so-named because former U.S. Vice President Dick Cheney was influential in achieving the exemption during passage of the Federal Energy Policy Act of 2001.Halliburton hatched the method of hydraulic fracturing, and Cheney was Halliburton’s CEO before becoming Vice President.

However, a recent study by the Endocrine Disruption Exchange in Colorado identified 1,000 chemical products and nearly 650 individual chemicals that different drilling companies used in hydraulic fracturing.

The Medical Society of the State of New York, which called for a moratorium on fracking that led to a state ban in 2014, associated these chemicals with a burdensome list of health threats, including: cancers of the skin, digestive tract, liver, bladder, and kidneys; anemia, excessive bleeding, low birth weight, birth defects, menstrual disorders, weight loss, male infertility, brain tumors, allergies, and autoimmune diseases.

EPA’s sampling of drilling fluids and produced water at field sites revealed “pollutants at levels that exceed 100 times the agency’s standards” and 62 documented cases where waste from oil or natural gas operations had endangered human health,” the WORC study noted.After hearing that Mandaree’s water was safe to drink in the wake of the Bear Den spill, DeVille requested that the tribal government supply answers to the public on a set of questions:

• How was the water determined ok to drink?
• What is the certified lab that completed the water samples and other environmental tests?
• What is the protocol for spills?
• Was there a monitoring system?

DeVille said she wants the answers from an environmental scientist, not a politician.(Contact Talli Nauman at talli.nauman@gmail.com)Copyright permission Native Sun News