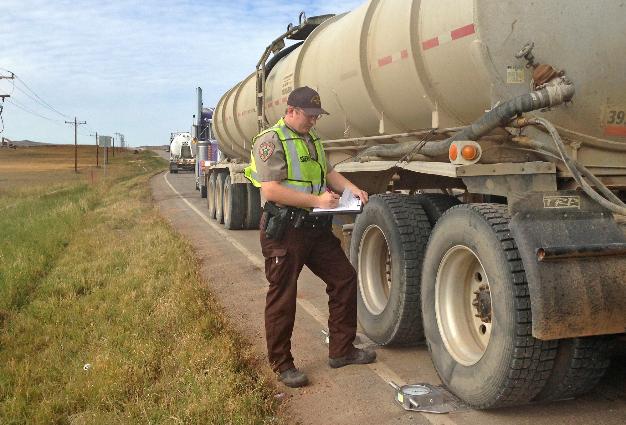 McKenzie County Deputy Sheriff Scott Luhman added up the scales to determine if the truck was overweight.

WATFORD CITY, N.D. – The dump truck rumbled over miles of unpaved roads in the hills just east of the Montana border, past the cattle and grain bins and haystacks, before arriving at the dirt pit. Bill Gore slid his truck onto the scale, inched up in line, and made a curving gesture to the man in the front-end loader.

That was the signal to pile the dirt on high, and the loader did: Gore’s five-axle truck pulled out of the pit north of Cartwright last week weighing 19,000 pounds more than its registered limit of 82,000 pounds.

“We try to run it as hard as we can,” said Gore, who’s been driving trucks here for four years.

Heavy trucks are the backbone of the ­Bakken oil fields, transporting the water, pipes, and sand needed to produce more than 1 million barrels of oil a day in western North Dakota. They move oil rigs from site to site, crude to pipelines and rail terminals, and dirt and construction materials to build the new roads, homes and businesses needed to serve the exploding population of new workers.

But the frenzied pace of the oil fields and spotty enforcement by authorities have encouraged the rise of overweight trucks. State authorities estimate that one-quarter of the Bakken’s water trucks alone are overloaded.

Trucks hauling larger loads than what they were designed for pose safety concerns because extra weight lessens their braking power and increases the potential damage they could cause in a collision. On the crowded Bakken roads, truck crashes that led to severe injuries jumped twelvefold during a recent four-year period. And 100,000-pound trucks, which are common in oil field traffic, take 25 percent longer to stop than 80,000 pound trucks, according to the Truck Safety Coalition.

In McKenzie County, the state’s top oil-producer, the tiny Sheriff’s Office has a file cabinet containing enormous violations. A driver from an Alexandria, Minn., company was pulled over this summer while hauling a crane that was 61,300 pounds overweight. A trucker from a Clear Lake, Minn., firm was caught driving 76,100 pounds overweight while carrying an excavator.

Trucker Michael Fisher, who acknowledged driving overweight, said one problem is being able to adequately slow down.

“It’s the stopping power,” he said, adding that he tried to keep more distance from other vehicles. “Your brakes are set up to stop a certain amount of weight, and if you increase that, you have a lot more chance of something going wrong.”

His truck jangling over a rutted, muddy lot, a South Dakota man named Scott pulled up to one of six stations at the water depot in Alexander.

He hooked a hose up to the station and punched into a kiosk the amount he wanted pumped: 130 barrels. Scott’s truck, registered to haul 80,000 pounds, now weighed about 85,000. But he was paid $2 for every barrel he hauled to an oil pad near Watford City, 20 miles away, and with six loads a day, adding on 10 barrels each time netted him an extra $120.

In interviews that spanned water depots, truck stops and rides across oil field roads, drivers here described pressures to “haul heavy.” They said jobs that pay by the ton or load, rather than the hour, offer an incentive to overload their trucks.

“You have to go heavy just to keep up with the wells,” said Jesse Scheffler, who once got a $3,000 ticket for driving a truck that was 20,000 pounds overweight. “We didn’t come to North Dakota for the scenery. We’re here for money.”

Alan Dybing, a researcher at the Upper Great Plains Transportation Institute, a think tank on transportation issues, has studied the issue. “If you look at the expected benefit vs. the expected cost of getting caught, in many cases right now the benefit exceeds the cost, so that’s why we’re seeing a lot of this,” he said.

At the water depot at Love’s truck stop in Williston, attendants cut drivers off after they have taken on 150 barrels. Even so, a recent log showed three people tried to fill up to 160.

Truckers are quick to let each other know when cops are out and which routes to avoid. After word spread of a state official weighing each truck coming through a dirt pit earlier this year, one trucker en route dumped his load out at the side of the road.

Halfway through his shift, the McKenzie County sheriff’s deputy knew he’d hit a prize as the water truck sped down County Road 10, tires bulging. The driver admitted he was carrying 180 barrels, a substantial load.

Scott Luhman pulled six scales from his squad car, placing them next to each row of tires on the back three axles.

The truck weighed in at more than 113,000 pounds — nearly 25,000 pounds over what it was legally licensed to haul. Local roads around the Bakken often have limits based on a truck’s number of axles, allowing those with more axles to haul more weight.

Luhman fined the driver $5,200. The driver wrote a personal check, promising his boss would put money in the account the next day.

But Luhman lamented that such catches are too rare in his department. McKenzie County fined just 33 trucks last year, down from 54 in 2012. For the first nine months of the year it issued 24 violations.

There are only two officers charged with the time-consuming task of truck-weight enforcement.

“[The state’s] lack of enforcement causes trucks to be out there that are unsafe, and they’re letting down the general public with that,” said Luhman, a native of Moorhead.

The North Dakota Highway Patrol has shifted resources to the western region but still only has 17 troopers in Bakken who are exclusively responsible for commercial vehicle enforcement. State troopers ticketed 1,318 overweight trucks last year, just slightly more than 1,188 in 2004, well before the oil boom. Enforcement today is down from 1,701 violations in 2012. Capt. Eldon Mehrer said he isn’t sure why, but he thinks truckers are responding to enforcement.

A sporadically manned weigh station in Williston closed this spring and a new one won’t open for more than a year. The squat, beige building at the bustling corner of Hwy. 85 and Route 2 is easy to miss, and 65 trucks roared through the intersection in one 15-minute period.

“The bigger companies generally are better,” Luhman said. “It is the smaller companies. It’s Joe Blow … that’s out here trying to save his family. He’s going to push the rules a little bit more, but these guys are just trying to make more money. They’re not necessarily having criminal intent.”

By the ton, by the hour

Sunday morning, chugging down Route 200 near the ­Yellowstone River. Fisher, the truck driver, turned onto an unpaved road and bounced over ruts and potholes on the way to the dirt pit.

The dispatcher had told him and his friend, Gore, the job would pay $9.50 a ton to haul the load to Watford City’s water treatment plant, about 40 miles away.

He pulled onto the scale so the pit could measure the truck’s “tare weight” — empty — and then pulled into line. Fisher flashed the man operating the front-end loader a “three” and “five” with his hands to signal that he wanted 35 tons, then lit up a Marlboro Red as the man dropped giant buckets of dirt into his truck. Fisher gave him a thumbs up and pulled onto the scale.

The side of his five-axle truck said its capacity was 80,000 pounds, but the attendant handed him a ticket showing that it now weighed a little more than 104,000.

Less than an hour later, Gore and Fisher pulled into the Watford site, where many other trucks waited in disarray. The men idled. Everything was taking longer than expected, and Gore worried the truck wasn’t making enough money.

Heading north back to the pit, Gore fielded a call about another job that would pay $100 an hour. He decided they would take it after running one more trip to the dirt pit.