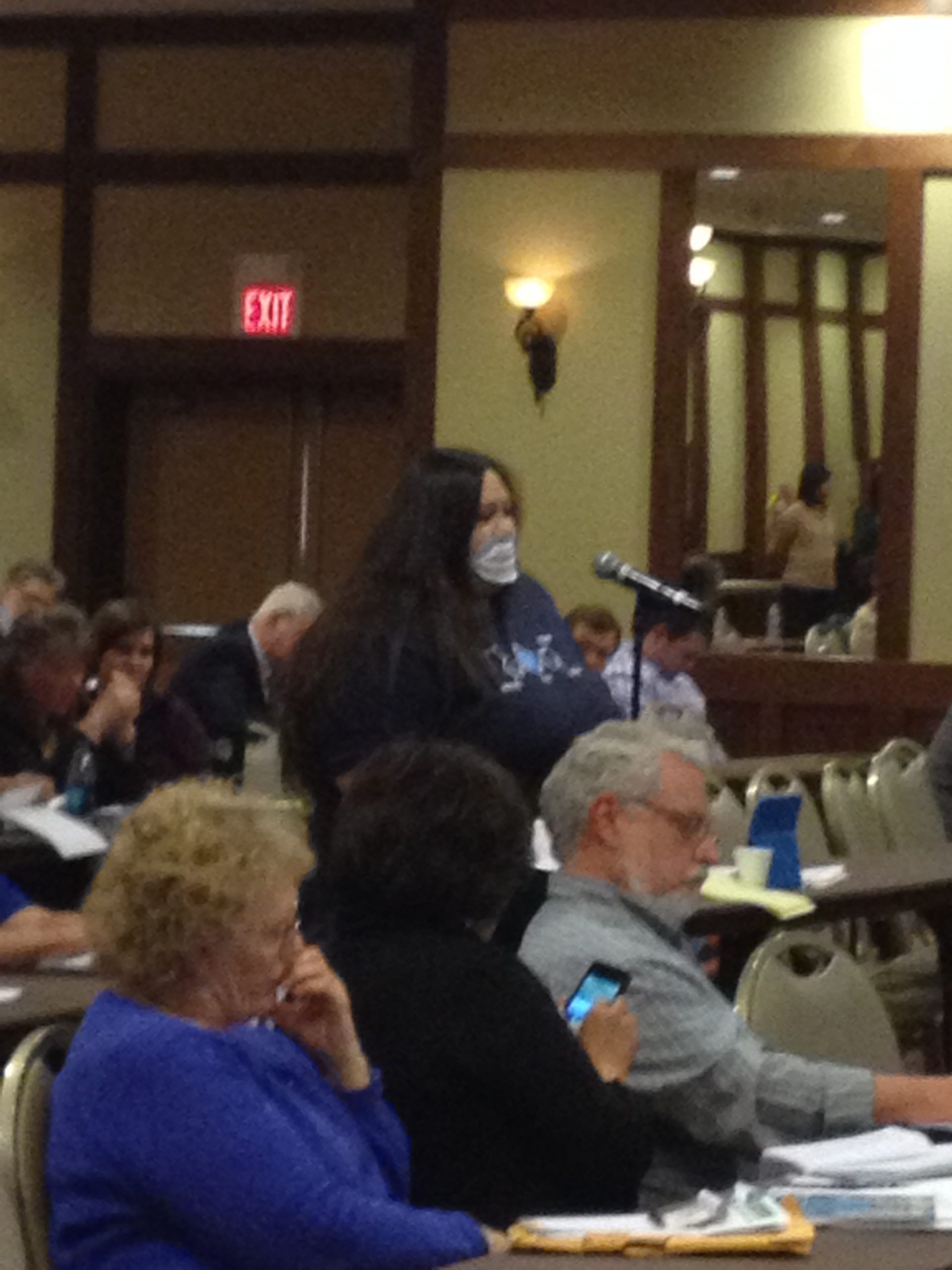 Cedar Gillette (DRC Member) of New Town cited a 2012 Government Accountability Office study that showed $12 million in royalties were lost due to flaring in the FBIR alone, but the issue goes beyond financial loss.

Though officials from the Bureau of Land Management, BLM, came to North Dakota hoping to gain public input about the waste and royalties lost due to flaring on federal land, the tone of the meeting soon steered toward air quality and the health hazards associated with the gases coming off the flares.Approximately 100 people filled a ballroom at the Ramada Grand Dakota Hotel in Dickinson on May 9 to share comments with BLM, as the federal agency prepares to rewrite its 30-year-old flaring waste and royalty regulations. BLM regulates drilling on federal lands and on the Fort Berthold Indian Reservation, FBIR, which constitutes approximately 30 percent of North Dakota’s oil production. Current regulations allow operators to flare for one year before being required to pay royalties.“One of the reasons we’re really interested is that in 2010, the Government Accountability Office issued a report saying 126 billion cubic feet of gas was being flared, which is equivalent to $23 million of lost royalties,” said U.S. Department of the Interior Deputy Secretary Mike Connor at the start of the meeting. “With the increase of development since then, that number is even higher.”A retired University of North Dakota clinical professor of medicine was one of the first to comment in the meeting, citing the rise of respiratory issues due to the gases flared and asked BLM to not simply consider economics in its decisions, but to look at the “misery index of people.” “The impact due to the particulate matter produced (by flares) is a hazard for thousands of meters away,” Dr. Vinod Seth said. “As we’re looking at economic reasons of why to control flaring and how many years we wait to institute these things … let’s not let those living in the Bakken be guinea pigs to what we know it does.” Cedar Gillette of New Town cited a 2012 Government Accountability Office study that showed $12 million in royalties were lost due to flaring in the FBIR alone, but the issue goes beyond financial loss.“Twin Buttes is most impacted with 92 percent being flared off,” Gillette said. “It’s completely unacceptable. There have been cases of asthma, bloody noses, and a cancer spike, and to be ignorant and say these breathing issues are not linked to flares is completely asinine. You must require meters on all devices and monitor them.”The audience also included people from Wyoming and Montana, and Bob Loresh of Wyoming’s Powder River Basin Resource Council who informed the crowd that he served as an oil and gas regulator in Alaska decades ago, said flaring is a 40-year-old problem in North America.“We should have learned something by now,” Loresh said. “The associated gas has significant value; it’s a driver of economic development. Every mcf flared is an opportunity foregone.” Connor and other spokespeople for BLM said the air quality issues would fall under the Environmental Protection Agency, but BLM would be working with them, as well as with state agencies, before proposing new rules.“The overarching concern is economic value to minimizing the waste,” Connor told the media. “So in the discussions I’ve had previously, I haven’t had as much exposure to the individual landowners that are impacted with health concerns, and so I think that’s something we’ll be looking at overall.”

Slicing through the red tapeMark Wald of Blaise Energy, a Bismarck-based service company that captures natural gas into generators and uses it to power equipment at well sites, told BLM that there is a tremendous interest from industry to utilize remote capture technology and leverage the gas for more beneficial uses. However, all the red tape on federal land is an obstacle.“Operators are hitting bigger permitting requirements … so if industry makes efforts to reduce that flare, if there’s any way that the permitting process can fast track it, it would be a great step in the right direction.” Other than Wald and statements from the North Dakota Petroleum Council’s Kari Cutting about gas capture plans that are coming as a result of efforts by the council’s flaring task force, industry was noticeably absent from the microphone. Petroleum News Bakken learned that industry leaders had met separately with BLM representatives prior to the meeting to inform them about what actions North Dakota is putting in place to bring flaring under control such as gas capture plans (see related story, page 1).“They really recognize the issue and are putting together some good strategies,” Connor said. “I’m encouraged by that action and we are certainly going to take that into account as we move forward with our regulations.”

FBIR needs BLM’s assistanceTheodora Bird Bear, a member of the Dakota Resource Council who lives on the FBIR, said the tribe relies on BLM’s regulations because there are no other guidelines to adequately address flaring and its health impacts on the reservation.“It’s really excessive now,” Bird Bear told Petroleum News Bakken. “There isn’t monitoring. The BLM is not physically present. They don’t have an office on Fort Berthold, and they really need an office. There are almost 1,000 wells on Fort Berthold, and a couple thousand more to come.”Connor recently met with Tribal Chairman Tex Hall and said the tribe is certainly grateful for the benefits of oil development, but BLM needs to respond to the criticisms of excessive waste of a natural resource on the reservation. While about a third of North Dakota’s wells are flaring, the number is closer to 40 percent on the FBIR. “They’re going to need some help from a technical standpoint in partnership with the federal government,” Connor said.The Dickinson meeting was the third in a series of input sessions that the BLM conducted across the country. BLM wrapped up its final meeting on May 15 in Washington, D.C. It plans to submit proposed rules by the end of the year.