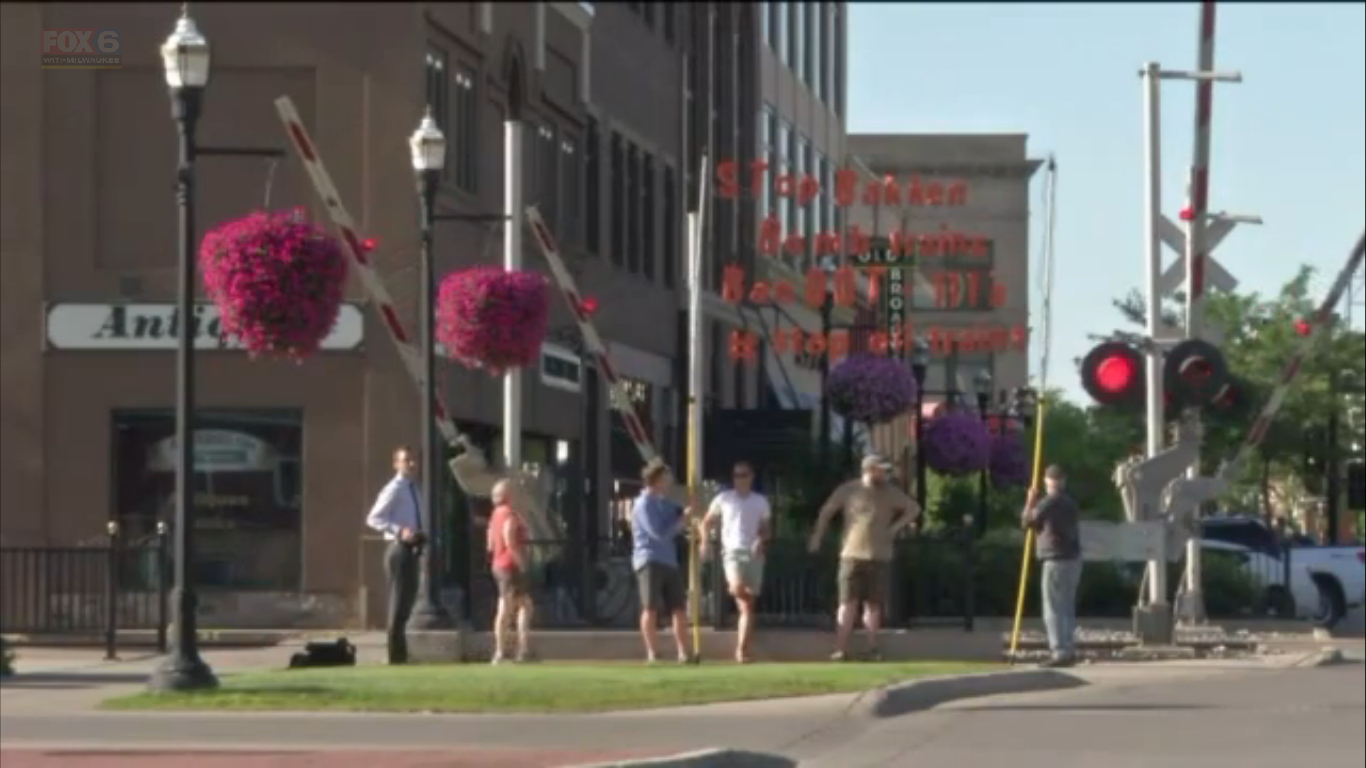 MILWAUKEE (WITI) — If you were told there was a bomb in your neighborhood, you’d high-tail it out of there! The neighborhood would be shut down — no one allowed back in until the bomb was gone. But in many Milwaukee-area neighborhoods — from west of Waukesha to Kenosha, train cars that could blow up like bombs are rolling through on the rails every day. It didn’t use to be that way, but things have changed.

Letitia Berghammers’ children love to play in the park near 68th and State in Wauwatosa.

“They love the trains! This is a great venue to see that,” Berghammers said.

If she only knew what could be in those train cars.

Northwestern North Dakota is a landscape changing faster than any in America. Cropland and cattle ranches are giving way to gas flares and oil wells.

This is the Bakken, America’s oil boom.

Oil from the Bakken is buried deep, in layers of shale. Using an environmentally-controversial technique called fracking,  oil companies drill down as far as two miles, then horizontally a mile or more, forcing in a mix of water, sand and chemicals to create fissures and free the oil.

“It changes the chemical composition of that crude oil and that`s why it changes the game for us,” Milwaukee Fire Department Battalion Chief David Votsis said.

It’s also a game-changer in the global petroleum picture.

“It could lead to energy independence or energy security in the United States,” Kari Cutting with the North Dakota Petroleum Council said.

But the spigot has opened so fast in the Bakken, there’s not enough pipeline capacity for all the crude oil, so most of it — about 75 percent –  crosses the continent in railroad tank cars. They’re cars that aren’t even made to carry oil — cars that have crashed with disastrous results.

In Lac-Mégantic, a runaway train derailed. Dozens of buildings were destroyed and 47 people died.

In Lynchburg, Virginia, roaring flames floated on the river.

Near Aliceville, Alabama, a train carrying more than 2.5 million gallons of Bakken crude oil crashed, burned and blew up.

In Casselton, North Dakota, fireballs erupted into the sky when a Bakken train derailed.  The entire town was evacuated.

“It was just too large.  There’s no way we could have fought that fire,” Casselton Fire Chief Tim McLean said.

The tracks where the train crashed in Casselton continue on to Wisconsin.

“We’re kind of at the epicenter of where this stuff is coming. It has increased the amount of traffic on the railroads exponentially,” Wisconsin Railroad Commissioner Jeff Plale said.

Two railroads are moving large amounts of Bakken crude oil through the state on its way to coastal refineries.

“It makes me a little nervous now,” Baldwin said.

In North Dakota, the Bakken tank cars have a new name:  “Bomb Trains.”

“It’s basically what we’ve got on the railway — bombs on the railway,” Sean Arithson with the grassroots Dakota Resource Council said.

The North Dakota Petroleum Council disputes that. It cites an industry-funded study that says Bakken crude oil is no different from other light sweet crude and poses no greater risk on the rails.

But after those fireball explosions, the federal government is not convinced.

Each tank car carries about 30,000 gallons, and with some trains hauling more than a hundred cars, that’s millions of gallons of oil.

The standard tank car called the DOT 111 is just seven-sixteenths of an inch thick — the thickness of a couple crackers. That’s why the federal government is pursuing new standards for cars carrying crude — something the railroad industry supports.

But the railroads don’t own most of the tank cars.  The oil companies and third-party leasers do.

Kari Cutting with the North Dakota Petroleum Council says the oil industry has already starting making improvements to the cars. Some of the corn syrup cars have already been upgraded with an extra metal jacket, pressure release valves to help prevent explosions, and half-height head shields to protect the tank in a crash.

“The industry has actually gone ahead of the federal government,” Cutting said.

The government is debating even stricter retrofitting requirements for existing cars and new higher standards for cars in the future.

Until that happens, it has ordered the railroads to notify the state when a train with a million gallons or more of Bakken crude is coming through.

“Thirty-four counties in the state have these routes.  Our job is then to provide information — disseminate that information to local fire departments, the emergency management office and sheriff’s offices,” Brian Satula with Wisconsin Emergency Management said.

The railroads are helping those first responders get ready.

“They train with us a lot. The sheer amount of oil being shipped makes it a little dicey situation,” Rich Matiszik, the Milwaukee Fire Department’s Hazmat Director said.

For now, the railroads have agreed to a new speed limit — 40 miles-per-hour when these “high-hazard flammable trains” –  as the government calls them — go through TSA designated “high-threat urban areas.”

Metro Milwaukee is one of those areas, covering the Canadian Pacific line from Mount Pleasant  to Pewaukee, where Ryan Andrews and his family hear the trains go by daily, 50 feet from their home.

“I don’t want it to explode or anything like that!” Andrews said.

For security reasons, the railroads won’t release to the public exactly how many Bakken trains are coming through Wisconsin, but it’s dozens a day.

The federal government is expected to come out with new regulations for tank cars next year, but the Railway Supply Institute, the trade organization that represents rail car manufacturers says it will take about five years to retrofit all the tanks on the tracks.

The Senate blocked a bill that would have authorized construction of the Keystone pipeline on Tuesday, November 18th, but it will be up for a vote again soon. If the Keystone XL pipeline were to be built, it would have the capacity to carry about 100,000 barrels of Bakken crude. That’s less than 10 percent of what the area is producing right now.

The Keystone XL pipeline would run from Canada to the Gulf Coast — and most Bakken crude goes to the East Coast and West Coast — to refineries there, so it is uncertain how much of a real impact that would have on rail traffic carrying Bakken crude through Wisconsin.