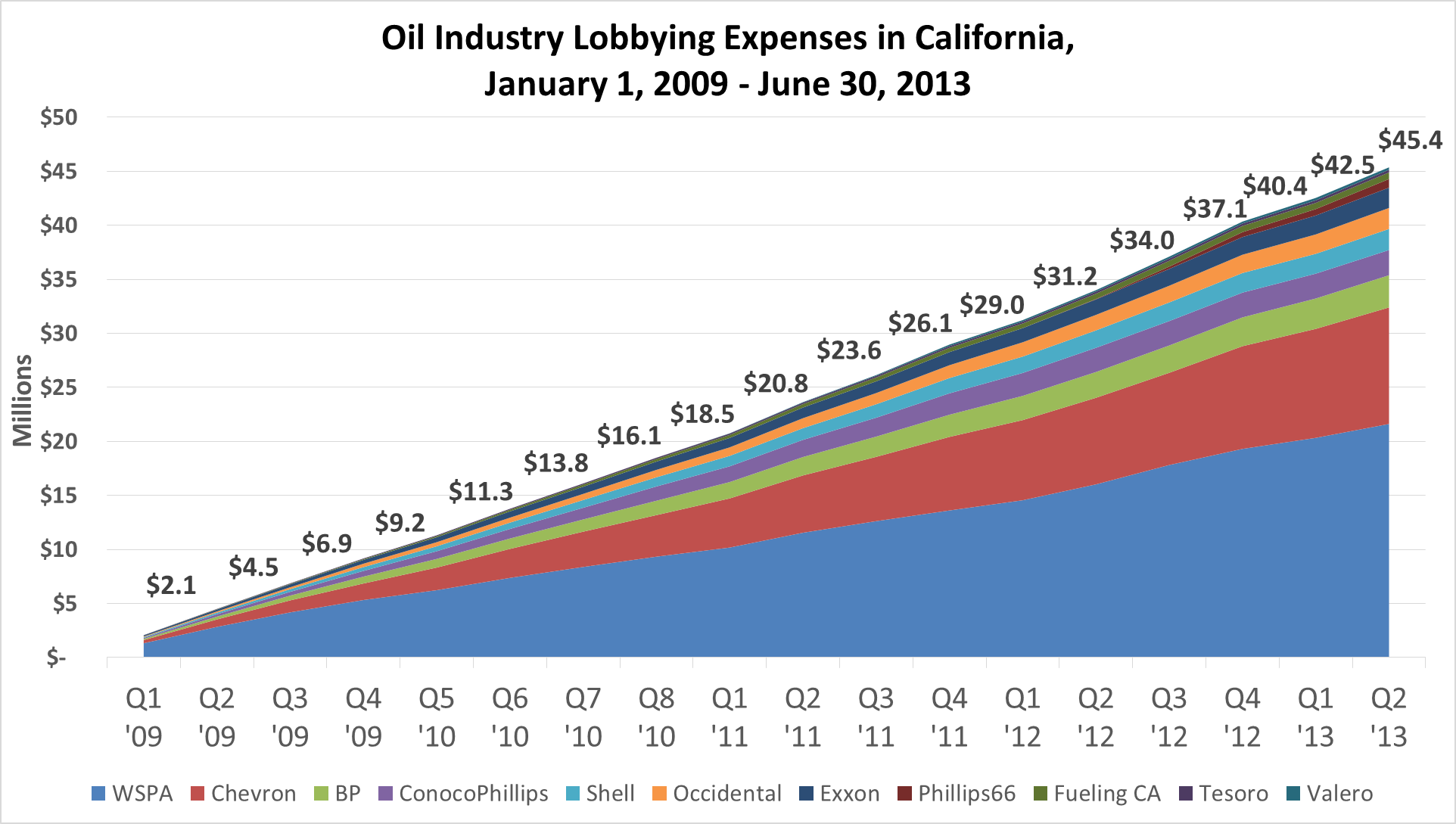 The oil industry’s largest trade group in California spent $8.9 million lobbying last year as it sought to influence laws on fracking, crude-by-rail, the state’s carbon emissions cap-and-trade program and many others.

The lobbying expense for the Western States Petroleum Association was nearly twice the $4.7 million that it doled out for influence a year earlier in the Golden State, according to records filed with the California Secretary of State. The bulk of the money went to KP Public Affairs, a Sacramento-based firm.

The expenses for 2014 included taking the heads of the California Air Resources Board (ARB) and the state’s Department of Conservation, and several lawmakers, to lunch and dinner. The meals included a $1,439 dinner in Maui, Hawaii.

“Western States Petroleum Association (WSPA) and its members are committed to effectively representing the millions of individuals and businesses that rely on affordable, abundant and reliable supplies of energy,” the trade group said in a statement. “WSPA’s informational outreach activities are a direct reflection of the issues confronting the energy industry in California and the potential impact those issues have on consumers, businesses and energy producers.”

The efforts came as the group pushed to stop the planned expansion of the cap-and-trade program to cover motor fuels. That thrust failed, and effective Jan. 1, suppliers of gasoline and diesel must now secure permits covering the greenhouse gas pollution from all fuel sales. Those are estimated at 17 billion gallons annually.

WSPA also battled the state’s low-carbon fuel standard, a rule that aims to lower the carbon content of fuels. Both LCFS and cap and trade are run by the state’s air board.

WSPA’s lobbyists in February 2014 dined with ARB Chairwoman Mary Nichols and her assistant, Virgil Welch, at Downtown & Vine, a Sacramento eatery. The bill for the meal was $1,204, the lobbying disclosures showed.

It wasn’t clear whether Nichols and Welch paid their own way. ARB spokesman Stanley Young said that Nichols “frequently covers her own expenses for business-related events, including dinners,” and when she does not, discloses that to the Fair Political Practices Committee (FPPC) in a yearly filing. Welch follows the same policy, Young said. He did not provide specifics for the meal with WSPA.

WSPA lobbyists also ate with Mark Nechodom, director of California’s Department of Conservation (DOC), and Steve Bohlen, supervisor and head of the Division of Oil, Gas and Geothermal Resources (DOGGR). That is the agency that last year crafted the state’s first-ever rules covering unconventional drilling, including hydraulic fracturing. The regulations were dictated by S.B. 4 from Sen. Fran Pavley (D).

Nechodom spoke at the conference and had intended to reimburse WSPA for his portion of the dinner, said DOC spokeswoman Teresa Schilling. The law requires that payback to happen within 30 days, but the statement from the oil group “came too late for him to be able to reimburse on time,” she said, so Nechodom instead disclosed the dinner in his report to the FPPC.

“In the course of doing business, he attends a lot of conferences,” Schilling said. “He also writes a lot of checks to reimburse.”

WSPA lobbyists also had dinner at Spago in Maui, Hawaii, in November 2014 with Olsen, state Sen. Bob Huff (R) and Assemblyman Henry Perea (D). Perea was one of the lawmakers who last year sought to stop cap and trade from expanding to cover motor fuels.

Push to limit cap and trade has wins, losses

The lobbying disclosures do not specify how much was spent to try to influence each individual bill or regulation. But WSPA and its allies last year worked extensively to prevent that scheduled growth of cap and trade. The oil interests called it a “gas tax” and said that it would drive up pump prices.

The oil group had some successes, but they were short-lived. Twice last year, lawmakers put forth efforts to block the planned inclusion of fuels in the program. One came from then-state Senate President Pro Tem Darrell Steinberg (D), who in February proposed substituting in a carbon tax. He later changed course and said revenues from cap and trade would be used to fund mass transit, climate-friendly development and high-speed rail.

The second effort was a late-in-the-session bill from Perea (D), who stripped text out of one of his bills that was sitting in committee, A.B. 69, and replaced it with language to put a three-year moratorium on adding fuels to cap and trade. It was supported by several moderate Democratic lawmakers. But Steinberg in August effectively killed the measure when he denied it a committee hearing, saying that there wasn’t time to fully vet the last-minute legislation.

“It’s hard to determine where they would view they had success,” Susan Frank, director of the California Business Alliance for a Clean Economy, said of WSPA. “It’s really now a decade of spending to weaken the state’s climate and clean energy policies. They haven’t had a lot of success. Our policies are intact. They’re growing.”

But Kathryn Phillips, director of Sierra Club California, said that WSPA made strides with its lobbying on fracking and crude-by-rail.

The trade group’s representatives lobbied on S.B. 1132 from Sen. Holly Mitchell (D), which would have imposed a moratorium on fracking until the state completed a study on the environmental impacts. The final Senate vote in May was 16-16. An earlier vote that same week was 18-16 in favor of the moratorium. It needed 21 votes to move to the Assembly.

“They managed to keep that bill from getting off the Senate floor by just 3 votes,” Phillips said. “On crude-by-rail, they were able to make sure access to information was not as great as it should be in the crude-by-rail bill” from Assemblyman Roger Dickinson (D) that passed.

“Their biggest success was their ability to continue fracking in the state, despite the fact that science suggests that fracking technologies are harmful to the environment and public health, and certainly helps accelerate the impact of climate change,” Phillips said.