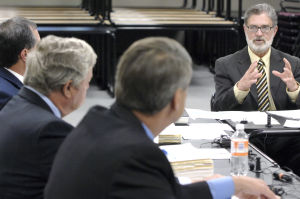 BISMARCK—Members of the Dakota Resource Council — a North Dakota community-based group — say a major series in The New York Times the past week was accurate and likely understates the serious pollution and ethical problems in North Dakota’s oil patch.  DRC Board Chair Linda Weiss of Belfield, ND, says the series documents how State government’s failure to regulate an out-of-control oil industry has already reached the point where areas of the ‘patch’ could be called a national sacrifice zone.

Weiss says, “We clearly have the best regulatory agencies the oil industry can buy and The New York Times article confirmed how current elected officials run our state to benefit the industry, not the people who live and work here. State officials claim we have the toughest environmental regulations in the nation.  That’s a joke. Laws and rules and regulations are only effective if enforced and ours aren’t. Fines aren’t collected and oil companies know they can get away with violating the law in North Dakota.”

Because of The New York Times documentation of serious ethical lapses by the governor and other high level North Dakota officials, Weiss, along with other DRC members, is calling for a special bipartisan legislative committee to investigate the failure to enforce state rules and regulations and the violations of the state’s corrupt practices laws as identified in The New York Times article.

State officials are claiming the Times story is inaccurate.  But Weiss says, “Ironically, they make that claim the same day it’s disclosed that most of the fines they grandly announced against a company for illegally dumping hundreds of radioactive filter socks have all been virtually forgiven (see Tioga Tribune). If the state legislature says no to our request, then maybe The New York Times should come back and look into the back room dealings of the oil industry and state legislators, too.”

The head of the North Dakota Energy Industry Waste Coalition, Darrell Dorgan, who led the charge on publicizing the hidden issue of radioactive waste in North Dakota, is calling for a performance audit of the State Health Department because of its failure to track or deal with radioactive and toxic oil waste.

Dorgan said that nothing in The New York Times article surprised him. “It’s how State government has been helping the oil industry for years. Over the past two years, we’ve been trying to work with the North Dakota State Health Department on protecting North Dakotans from the illegal dumping of radioactive waste in our rural communities.  75 tons of radioactive waste are generated daily from drilling activity and I doubt the Health Department can tell you what happened to much of it.  The Times article confirms what we’ve been saying and demonstrates conclusively the state has either lost or given control of toxic and radioactive waste to the industry. It’s likely North Dakota will be declared a ‘Superfund Site’ within a decade. This didn’t have to happen, but incompetence has its costs.”

The State Health Department, at the request of the oil industry, is now studying a proposal to raise radioactive levels of waste that can be dumped in North Dakota.  Dorgan says, “If it can’t be demonstrated they can or will track low level radioactive and toxic waste, why allow them to raise the limits?  Their job is to protect the health and welfare of people who live in North Dakota, not increase oil industry profits. Unfortunately, they’ve decided their job is the latter not the former.”

Weiss says, “DRC members believe the North Dakota Legislature should allow both a performance audit of the State Health Department and other regulatory agencies and a bipartisan legislative committee to investigate the failure to implement state law and violations by state officials. Our government needs to understand that they are elected to look out for us, not companies from Texas and Oklahoma.”