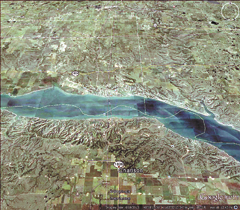 Too close for comfort

All three were the locations of major oil or saltwater spills that threatened imminent harm to Lake Sakakawea. Although some of the spilled material made it to the state’s largest body of water, environmental damage and dangers to public drinking water were minimal.

Todd Lindquist, U.S. Army Corps of Engineers project manager in Riverdale, is among those who have a spent a considerable amount of time at spill sites. Lindquist manages Lake Sakakawea and its sprawling shoreline, much of which abuts oil wells pumping 24 hours a day. In some cases the protective clay barrier surrounding a well site is contoured right against the border of Corps land adjacent to Lake Sakakawea.

Many of the wells sit on land overlooking the lake. Over 200 wells dot the shoreline in the Van Hook region of Sakakawea alone. There are countless other oil wells farther west along Sakakawea shoreline and, despite the recent downturn in oil prices, more wells are in the planning stages.

While much public attention has been focused on large pipelines, it is smaller pipelines that have been responsible for major spills. Smaller pipelines often carry saltwater, or brine, a substance considered even more damaging to the environment than oil.

“That’s what I’m concerned with, those brine water pipelines,” said Lindquist. “There’s been some large spills in the past several months. They don’t have very good monitoring.”

Major brine spills have occurred at Bear Den Bay south of New Town, at Blacktail Creek north of Williston and at numerous locations in the Renville Corners region north of Minot.

The spill above Bear Den Bay occurred on land owned by the Three Affiliated Tribes, but the saltwater flowed down into Corps of Engineers land and, eventually, reached Lake Sakakawea. The Blacktail Creek spill occurred on private land but made its way downstream into the Little Muddy River and Lake Sakakawea. The Blacktail Creek spill dumped an estimated three million gallons of brine out of a ruptured pipeline before it was discovered. Only four-inches in diameter, the pipeline was responsible for the largest brine spill ever recorded in North Dakota.

“That’s my frustration,” said Lindquist. “All the spills I’ve seen were off Corps’ managed lands, but when they break they end up on the project. A lot of them will drain into the lake. They call it produced water, or brine, or saltwater but they have a lot more in them than that. We’re working on a number of issues to push better regulations on them.”

The Yellowstone River has seen two pipelines transporting oil break and dump crude into the river. The most recent rupture occurred near Glendive, Mont., where an estimated 50,000 gallons of oil escaped into the ice-covered river. Officials say they were able to recover only about 10,000 gallons, primarily near the spill site. The remainder was trapped under the ice and has not been recovered.

It is expected oil from the Yellowstone River spill will eventually flow down the river and find its way into Lake Sakakawea, which is fast becoming a catch basin for oil and brine spills. The lake is used for municipal water supplies and recreation, including boating and fishing. Although Sakakawea is a very large body of water, spills entering it can cause harm to the environment and the lives of people associated with the lengthy lake.

The Corps is currently requesting that all companies owning pipelines crossing Lake Sakakawea submit documentation on the age and status of the pipelines, and information of when the pipelines were last tested and what the results were. Some of the pipeline leases are nearing their completion date and owners may soon be subject to new requirements.

“Any new leases will require test results and test data,” said Lindquist. “A lot of the leases from the ’50s have terms that we wouldn’t accept now.”

An example, says Lindquist, is “jet sledding.” Jet sledding is a process that allows a pipeline to be laid in a shallow trench on the lake floor and then covered with natural silt.

“Some companies are still proposing it but we are saying no to that,” said Lindquist. “Some companies say it is not feasible to directionally bore here. Others say they can. Obviously, boring is our highest priority.”

The pipeline that became exposed and ruptured recently in the Yellowstone River was said to have been buried 8 feet beneath the river bed. It had become exposed, possibly during the high river flow season of 2011. Any future pipelines under Lake Sakakawea, says the Corps, would be 100 feet or more beneath the reservoir floor.

“They are proposing all kinds of things,” noted Lindquist. “One company is proposing a 3-foot diameter protective pipe with other pipes inside of it.”

While Lindquist says he remains concerned about hundreds of miles of active saltwater pipelines in close proximity to Lake Sakakawea, he cannot overlook the aging and possibly worn pipelines currently crossing the reservoir. It is possible that some of the pipelines, or portions of them, may be nearing the end of their lifespan.

“They are a concern. They are,” said Lindquist. “That’s why we are going back to all the owners and requesting their data. We are revising our standards. One company wanted to start construction this spring. They were not happy with a six to nine month review time.”