Communities in Limbo as ND Decides on Large Farming Operations 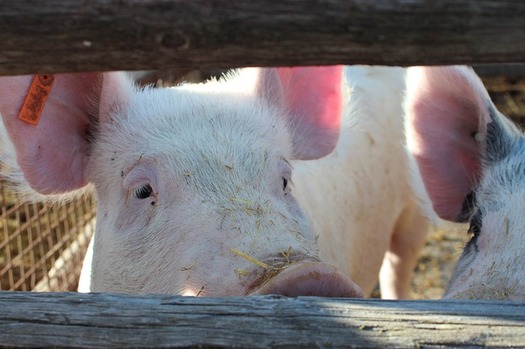 Listen to the radio story HERE

BISMARCK, N.D. — Could large hog-farming operations be on the horizon for North Dakota? The state Department of Health is clearing the way for them, by deciding on changes to pollution-control rules from animal feeding operations.

Janelle Engstrom is an agriculture and food task force member with the Dakota Resource Council. She lives near one of the sites, and spoke at a public hearing in Bismarck last week on the proposed changes. One of her biggest concerns is deleting a rule that now requires large operators to report annually on things like manure production.

“The North Dakota Department of Health is saying, ‘Go out there and do whatever you want because you won’t have to report on it anyway,'” she says. “And that’s something that we know would have a big impact on what those producers are doing, if they do not have to report on it.”

Engstrom says another change – not to count weaning piglets at these operations – would lead to more waste. Locals are worried the Confined Animal Feeding Operation (CAFO) could contaminate nearby Devil’s Lake and affect their livelihoods. The farm operators say it has economic benefits for the region.

The Department of Health is accepting public comment on the rule changes through March 2.

Roy Thompson is a member of Concerned Citizens of Buffalo who lives near the other proposed CAFO. At last week’s meeting, Thompson brought up similar issues to Engstrom, noting the large amount of manure that will be produced and what that means for surrounding communities. He says the Department of Health should keep local residents in mind when deciding on CAFO permits.

“It’s industrial pork operations that have their sights on North Dakota,” he says. “And the main thing we were concerned about is, are the local landowners and these little communities being protected, and do they have a voice in this?”

Engstrom adds she isn’t opposed to farming and is a farmer herself. But she’s concerned these operations will change the face of family-owned farming in North Dakota, and that industrial-scale hog farms are likely to expand in the state once they set down roots.

“These people are knocking on the door in North Dakota and they’re wanting in, and it’s up to us to try to keep them out, because it’s going to be bad for North Dakota,” Engstrom warns.