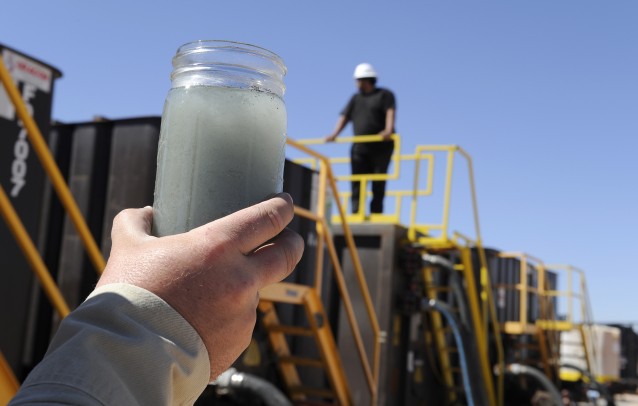 A jar holding waste water from hydraulic fracturing is held up to the light at a recycling site in Midland, Texas, Sept. 24, 2013. With fresh water not as plentiful companies have been looking for ways to recycle their waste. CREDIT: AP PHOTO/PAT SULLIVAN

Companies Are Fracking With Harmful Chemicals Through Regulatory Loophole

Oil and gas companies are using a loophole in federal regulations to use dangerous chemicals in hydraulic fracturing operations without a permit, according to a new report.

The report, published this week by the Environmental Integrity Project (EIP), found that some oil and gas companies are using petroleum-based liquids in their fracking operations, liquids that can contain harmful chemicals like benzene. The Safe Drinking Water Act requires oil and gas operations to get a permit to frack with diesel fuel, because the fuel contains benzene — a known carcinogen. But the act has a gap — known as the “Halliburton Loophole” — that doesn’t require companies to get a permit for benzene itself, so fracking operations are free to frack with the carcinogen. According to the EIP, at least six additives for fracking fluid contain more benzene than diesel.

“You can use benzene in large quantities, just as long as you don’t call it diesel,” Eric Schaeffer, EIP’s Executive Director told Bloomberg.

The Halliburton Loophole exempts fracking from multiple environmental protection regulations, including the Safe Drinking Water Act, Clean Water Act, and Clean Air Act — it’s through this loophole that companies aren’t required by federal law to disclose the chemicals they use in the fracking process. But diesel fuel, since it contains so many harmful chemicals, is still-off limits to fracking companies if they don’t have a permit.

That hasn’t stopped fracking operations from using benzene — which has beenlinked to leukemia — as EIP’s report shows. Last month, according to the report, an oil and gas company called BlackBrush O&G, LLC injected up to 48,000 gallons of benzene into a well in Texas. Another company, Discovery Operating Services, injected almost 1,000 gallons of benzene into wells in Texas between May 2013 and February 2014. These injections put water at risk of contamination from harmful chemicals — “while fracking fluids are injected into shale formations deep underground, even a small leak into a drinking water aquifer nearer the surface can be catastrophic,” the report notes.

But, the group notes, it’s hard to determine how often oil and gas companies use benzene and other toxic substances, since not all companies voluntarily disclose this data to FracFocus — the fracking chemical disclosure registry that EIP used in its report. EIP is calling on Congress to repeal the Halliburton Loophole, and thus force oil and gas companies to disclose the chemicals they use.

“To protect public health, Congress should repeal the Halliburton Loophole and EPA should broaden the categories of fracking fluids that require Safe Drinking Water Act permits,” Schaeffer said in a statement. “Without these reforms, we are perpetuating a loophole that allows the unregulated injection of unlimited quantities of highly toxic pollutants into the ground.”

EIP found in August that oil and gas companies have also been using diesel in fracking operations illegally. Between 2010 and July 2014, the report found, about 351 wells were fracked with diesel by companies that didn’t have permits.

Like the federal government, most states don’t require fracking operations to disclose the chemicals they use. Last year, California passed one of the strictest laws on chemical disclosure in the nation, one that requires oil and gas companies to disclose the chemicals they use. But other states have passed more regressive laws: North Carolina has a rule on the books that gives fracking companies the right to keep their chemical mixes secret, and Wyoming and Ohio have rules that provide exemptions for disclosure of companies’ “trade secrets” — the chemical mix that they don’t want to disclose because, they say, it could threaten their business.