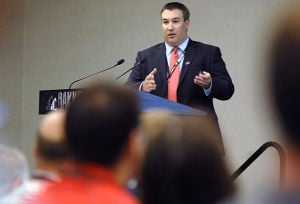 BISMARCK, ND. _ With energy production setting records in the region, regulators and industry officials stressed the need for collaboration and communication in the permitting process, during a discussion Wednesday at the Williston Basin Petroleum Conference.

David Glatt, head of the environmental section of the state Health Department, said 10 oil field waste disposal facilities are operating in the state and several of them are seeking approval for expansions.

North Dakota law states that material and equipment containing less than 5 picocuries of total radium per gram of material can be released or used without restriction.

Anything over 5 picocuries must be disposed of at sites out of state.

Several instances of illegal dumping of filter socks have occurred over the past year. Filter socks are used to filter toxic saltwater and water used for hydraulic fracturing at well sites and over time, they can accumulate radioactive particles.

“People go right to Chernobyl, to Fukushima (nuclear reactor disaster), three-headed gophers, all the way down the line,” he said.

A study is underway to review safe levels of radiation for oil field waste and determine whether the state should increase its limit from 5 picocuries. The study also will look at rules on waste dumping and whether any state landfill sites are appropriate.

For oil field waste facilities or any kind of landfill in the state, companies need to be open with the public early in the process, he said.

“We’re saying, ‘Slow down. You gotta reach out to the public,”’ Glatt said. “None of us want a landfill in our backyard.”

Jeff Kummer, MBI Energy Services vice president of operations, said using the slurry injection process might be something to consider in North Dakota.

The process involves griding solid waste into small particles mixed with water or fluid and then injecting it into an underground formation.

Kummer said it already is an industry best practice in numerous locations around the world, but not in North Dakota yet. For slurry injection to be used in the state, regulators and the industry would have to work to develop standards, he said.

“In North Dakota, what will be interesting is the market,” Kummer said.