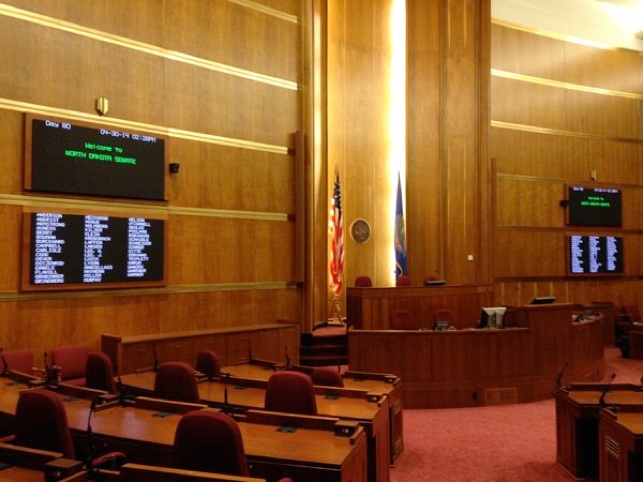 Sen. Dwight Cook, R-Mandan, acknowledged the oil tax issue is controversial and has been before the Legislature the past couple of sessions.

“This is a great bill for partisan politics,” Cook said. “We may think our boxing matches are entertaining, but they (citizens) send us here to solve problems.”

The bill creates an overall 10 percent tax on industry and leaves the state’s 5 percent gross production tax would be left untouched.

If the large oil tax trigger hits this year, it would be in place through the end of November and go away for the month of December.

Minority Leader Mac Schneider, D-Grand Forks, gave a scathing rebuke of the speed at which HB1476 was pushed through the Legislature. The bill was introduced last Friday.

“Last Thursday, Mr. President, this bill didn’t exist. I literally have leftovers in my fridge that are older than this bill. To make a decision of this magnitude over the course of five working days is legislative malpractice,” Schneider said.

Schneider said it trades a slight fiscal boost in the short term at the expense of a multi-billion dollar loss in potential revenues long term and is a poor insurance policy of sorts.

The bill’s fiscal note estimates $35 million in additional revenue during the 2015-17 biennium.

“If it is insurance, Mr. President, it is the worst and least affordable insurance product of all time. I would not want to be the agent tasked with selling that insurance policy,” Schneider said.

Sen. Kelly Armstrong, R-Dickinson, said the state nearly hit the large trigger late in the 2009 session which could’ve lost the state a substantial amount of revenue.

The state’s most recent revenue forecast estimates the state will lose billions in 2015-17 in oil tax revenues if the trigger hits, making action to curb the impact necessary.

“Oil revenues have become too important to the citizens of North Dakota for us to maintain the trigger in the code. This deal is a fair deal for the state,” Armstrong said.

“We have created a policy that’s competitive with other states,” Unruh said.

The state’s two oil tax triggers are based on the West Texas International benchmark price based out of Cushing, Okla.

The state’s large trigger kicks in if the price of oil averages below a set price for a five-month period. At that point, the state’s 6.5 percent oil extraction tax is forgiven on new wells for the first 24 months then at 4 percent after that.

The current value for the large trigger is $55.09; it is recalculated annually to account for inflation. For the tax to return, it would take a five-month period of prices averaging above the trigger price.

It eliminates this 24-month incentive for industry, cutting it off after November, if the trigger kicks into effect this year.

HB1476 replaces the old larger trigger language. If the price of oil averaged above $90 per barrel for three consecutive months, the extraction tax would increase to 6 percent. It would return to 5 percent if prices dropped back below $90 for three months.

Sen. Erin Oban, D-Bismarck, questioned the pace of the bill’s passage through each chamber and the balance being proposed long and short term.

“What we’re willing to give in exchange … (is) unnecessarily excessive,” Oban said.