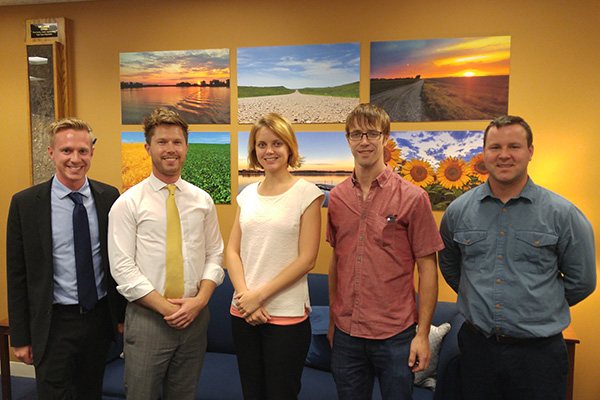 October 6, 2016
The Trans-Pacific Partnership (TPP), the largest trade deal ever, is in the process of being forced through Congress by the Obama Administration and their corporate allies. The TPP takes away the sovereignty and democracy of the United States and gives it to other countries and multi-national corporations.

In mid-September, DRC members Karen Erickstad and Tyler Sanford participated in a fly-in lobby trip organized by Western Organization of Resource Councils and Food and Water Watch. During the full lobby day on Sept. 15, Erickstad and Sanford urged the North Dakota Congressional delegation to oppose the TPP and to stop it from coming up for a vote. The pair were able to meet with staff from all three offices.

TPP NATIONAL ACTION WEEK: October 10-15, 2016
Want to learn more about the largest trade deal ever and what you can do to help? Attend a community conversation hosted by DRC members in Bismarck (Oct. 11), Rugby (Oct. 13), or Fargo (Oct. 18).

This system of so-called free trade is rigged to benefit corporations because it gives them power to overturn laws they see as a barrier to profits. For example, the United States had a sensible country of origin labeling law (COOL) for meat. Canada, Mexico, and corporate meat companies felt that COOL was a barrier to trade and unfair. Canada and Mexico took their complaint to the World Trade Organization (WTO) and they won. Congress repealed the entire country of origin labeling law. Another example involves the Keystone XL. Although thousands of activists pushed Obama to reject the Keystone XL pipeline, TransCanada is suing the United States because they believe his decision is unfair. TransCanada is asking the United States taxpayers to pay them $15 billion under NAFTA (North American Free Trade Agreement).

In addition to the lobby day on Sept. 15, the trip also included background, planning, and strategy sessions with other community organizing groups from Missouri, Iowa, Minnesota, South Dakota, Montana, Colorado, Idaho, and Oregon. Both Sanford and Erickstad said seeing the inner mechanisms of the government was a “demystifying” and empowering experience that reinforced the power of participation.

“In our current age of social media and the internet, the barriers for the average person to participate politically have never been lower,” said Sanford. “Without our participation, North Dakota and America as a whole would cease to be democratic. So our active participation is not only beneficial, it’s essential.”

“I came away feeling like our government was less out of my reach having walked amidst the places where our elected officials work,” Erickstad said. “It was encouraging to meet the folks from other states fighting the same fight as DRC.”

The Trans-Pacific Partnership: It’s the Biggest and Most Destructive Trade Agreement You’ve Never Heard Of

BEEF Magazine: Is TPP more about control than trade?