‘Dropping dead is my retirement’: the gold rushers of Williston – in pictures – The Guardian 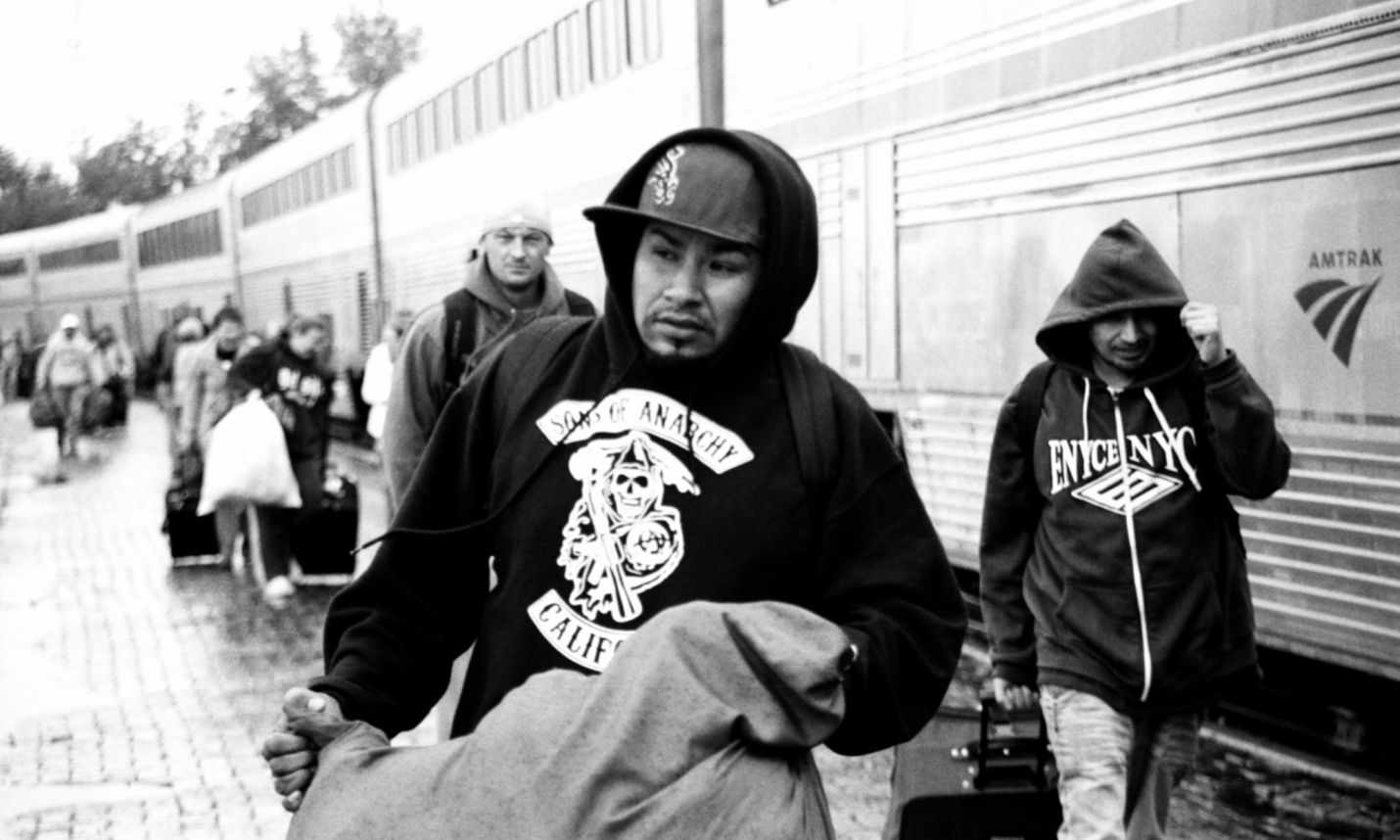 Accents from every state in the union can be heard as workers pour off the train each day in Williston, North Dakota, ready to try their luck as the welders, truck drivers, plumbers, oil rig roughnecks, frackers, water carriers and road crews required to support the booming fracking industry – but also as plumbers, lawyers, cooks, accountants and everything else it takes to build a rapidly burgeoning city.

Once a small stop on the Empire Builder that runs from Seattle to Chicago, Williston has become a major rail destination. There are two Amtrak trains a day – one eastbound, one westbound. Families on the platform with all of their belongings is a common sight.

Roughnecks have the most dangerous job in the Bakken, working on the oil rigs themselves. Chase, a Sioux Indian, had to leave his wife and two-week-old baby at home in Montana. “I miss his little hiccups and his little sneezes. I hope he don’t forget about me.”

Angelica, an exotic dancer from Minnesota, in the dressing room at Heartbreakers Gentlemen’s Club. Bars and nightclubs are just some of the many local businesses that are booming in Williston.

Erika, from New Jersey, prepares to take the dance floor at Heartbreakers. I commented on her muscular arms. “Pole arms,” she replied.

Oil industry workers play blackjack at Doc Holidays. While some of the money earned invariably gets spent in Williston bars, much of it gets sent back to the families these men left in order to support. Many workers make a point of spending their earnings in their home states. “I try to spend everything I’m gonna spend, high-dollar items, at home,” said one. “To spread the wealth. I even get my haircuts at home.”

Shifts can be long; DK’s nightclub is a place to blow off steam. Some of the bars are known for heavy drinking, prostitution and closing time fights in parking lots.

Elena at a McDonalds: “When you engage with men in a different kind of lifestyle, the way they portray themselves is very different. But here, you see their real face.”

The city is expanding rapidly, and half-made roads jammed with traffic like this one are a common sight. More tarmac is unwrapped every day. When the weather is good, road crews work around the clock, 24 hours a day, seven days a week. Traffic congestion, dust kicked up by oil tankers and road fatalities are constant features of life here.

Row houses await new tenants. They tend to feel oddly like ghost towns: it can be hard to tell if anyone lives there. Most workers in the Bakken work so hard that you rarely see anyone hanging out outside their houses.

Many drill workers actually bunk in housing units known as ‘man camps’, sometimes five to a room for up to two weeks at a time. Few have the opportunity to cook at home, and freeze-dried cups of salami and other meat are popular meals for those who lack refrigerators.

Most people shop at the Williston Walmart: one of the busiest in the country, it is also one of the few outlets that has to actually close its doors once a week to restock. Staff wages start at $17.50/hr, almost two and a half times the federal minimum wage of $7.25/hr. Workers often get produce and pre-packaged food at Walmart, as many living quarters have inadequate refrigeration.

Ron, a Vietnam vet and oil service technician from Idaho, lives in a 12x15ft room in a converted shipping container. Ron lost his savings when the price of his land in Idaho halved in the housing market collapse. “I considered just dumping everything and driving off with the motor home, and I just can’t – I’ve worked too hard too long. So unless the economy comes back and land prices come back, I’m stuck.” His friend and roommate Carter chimes in: “Dropping dead is my retirement.”

An oil worker on an Ensign drilling platform north of Williston. Energy sector employees often work 12 hours on/12 hours off, and are screened randomly and regularly for drugs and alcohol. No one can afford a mistake.

Riley came from Nebraska with her grandmother and great-grandmother to visit her father, a truck driver in Williston.

Most workers who come to the Bakken leave their loved ones behind, but as Williston grows more families are trying to make a proper life in the city.

Paris moved to Williston from Soldotna, Alaska to be with her boyfriend. She works at the new Motel 6, where a room costs about $110 per night and which is at capacity almost every night of the week.

Larry Pryor, a General Motors retiree from Michigan, lost all his savings in the GM bankruptcy. Forced to go back to work again, he came to Williston to find it. When he first arrived he lived in a tent with three other men for the entire winter. “I like the money, but it’s not my dream job,” he says. He hopes to make enough money in the next five years to retire in Costa Rica and pursue his real dream job: master diver.

• How does a city cope with quadrupling in size in a decade?