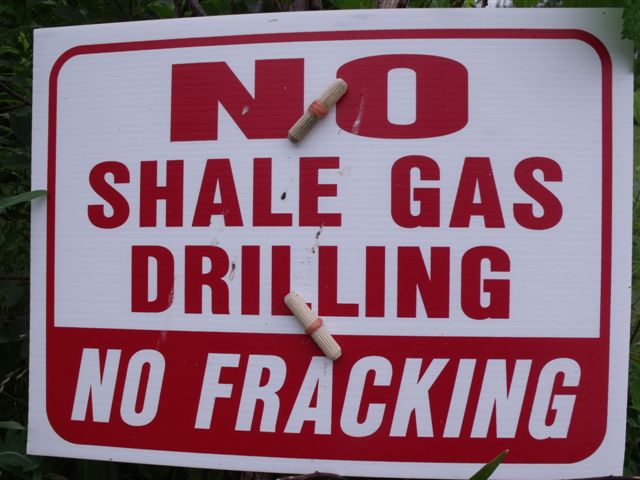 Enviros revel in N.Y. victory as industry plans next steps

Cheers echoed through the anti-fracking movement yesterday as New York’s highest court ruled that communities can ban hydraulic fracturing within their borders.

The New York Court of Appeals found that the towns of Dryden and Middlefield were within their rights in using local zoning power to ban fracking and other oil and gas activities. The decision is a major victory for municipalities in New York and nationwide that have sought to regulate the industry as it inches closer and closer to where people live.

Deborah Goldberg, an Earthjustice attorney who represented Dryden in the case, said the victory will be “a real shot in the arm” for communities worried about potential environmental and health impacts of shale drilling.

“I think the trend is very much in favor of localities exercising the power they have,” Goldberg told EnergyWire. “The federal government has allowed loopholes to be carved in all the federal laws, and the states are simply not stepping up to the plate and protecting people from the impacts of this industry.”

New York has had a moratorium on fracking and horizontal drilling since 2008, but pressure is on Gov. Andrew Cuomo (D) to let landowners cash in on the natural-gas-rich Marcellus Shale that has fueled a production frenzy in neighboring Pennsylvania. Meanwhile, towns worried about the industry’s impact have scrambled to block drilling. Dryden and Middlefield both amended their zoning ordinances in 2011 to prohibit oil and gas production activities in their rural communities.

The bans drew quick legal challenges from Norse Energy Corp. and Cooperstown Holstein Corp., which had leased rights for drilling in the towns. The companies argued that the state’s Oil, Gas and Solution Mining Law trumped local zoning power through a supersession clause designed to ensure uniform regulation statewide.

But the court rejected the argument, finding that laws aimed at preserving community characteristics and protecting health were squarely in the scope of local governance. The 5-2 decision relied heavily on the state’s Municipal Home Rule Law, which entitles local governments to enact laws to protect their physical and visual environment, their residents, and their property.

Though state law holds primacy over municipal ordinances, legal precedent in New York holds that those local laws can be invalidated only if state law expressly pre-empts local zoning. The court interpreted the state oil and gas law to draw a distinction between regulation of how companies operate and where they operate, leaving the latter to local control.

“Plainly, the zoning laws in these cases are directed at regulating land use generally and do not attempt to govern the details, procedures or operations of the oil and gas industries,” Judge Victoria Graffeo wrote in themajority opinion. Effects on industry operations are merely incidental, she added.

In a secondary argument, industry lawyers contended that if the state’s oil and gas law does not pre-empt local zoning, it at least bars outright bans. The court rejected this, too, holding that fracking bans are a reasonable use of zoning powers.

The court’s ruling is a milestone in a long New York drilling battle that isn’t over yet. Industry and landowners seeking to cash in on the nation’s shale boom have slammed the decision and called on the state to move forward on drilling in the many towns that are open to development.

“The rights of the State and its experts at the [Department of Environmental Conservation] to make decisions concerning the production of New York’s domestic resources has been obliterated by the Court in favor of a not in my back yard mentality,” Joint Landowners Coalition of New York President Dan Fitzsimmons said in a statement.

“It’s time for the State to issue the final [environmental study] allowing natural gas exploration in towns that want to develop their natural resources,” he added.

The group has already filed a mandamus suit, asking the New York Supreme Court in Albany to force the state’s hand on permitting. If Cuomo continues to delay a decision on the matter, as expected, the group has threatened to sue the state for depriving landowners of the financial gain that could accompany shale drilling there.

“That will be the next chapter in the story, where somebody who has heavily invested in mineral rights should be able to challenge this as a takings,” said Thomas West, an attorney representing Norse in the case. “A lot of landowners are going to have very valuable rights taken if municipalities ban all development of that resource.”

But a takings lawsuit won’t be easy. For a claim to succeed, petitioners will have to show a court that they’ve lost all economic use of their property. In states with split-estate property arrangements, in which the subsurface mineral rights are typically severed from the surface land, a judge would be more likely to decide that a mineral owner had lost all economic use of his property from a drilling ban.

But in New York, split estates are less common, meaning that even if a landowner cannot develop oil and gas, he retains economic use of the surface. Scott Kurkoski, an attorney for JLCNY, said last year that he was identifying property owners who hold subsurface rights but not the surface land above (EnergyWire, March 28, 2013). Kurkoski also represented leaseholders in the Dryden/Middlefield case.

Goldberg, the Earthjustice lawyer, said she was doubtful a takings claim would gain any traction in court because the state has not issued any actual permits for drilling, rendering losses purely hypothetical.

“I’m looking forward to a takings lawsuit,” she said. “We have a very good argument that there couldn’t possibly be a takings in New York: They don’t have permits. What has been taken from them?”

But if successful, a takings claim would be a huge win for the industry, leaving cash-strapped governments hamstrung in any efforts to limit drilling where it might result in lost revenue for property owners.

Though the New York decision has no direct impact on other states, it is likely to fortify the efforts of communities tackling shale drilling in Ohio, Colorado, Texas and elsewhere (EnergyWire, June 23).

The decision follows another big victory for community rights advocates. The Pennsylvania Supreme Court in December ruled that the state had overstepped its authority in enacting a law that forced municipalities to allow oil and gas activities in all zones (EnergyWire Dec. 20, 2013).

The Ohio Supreme Court is now considering a similar case involving zoning restrictions in the Akron suburb of Munroe Falls.

“We are certainly hopeful that it will be three in a row,” Goldberg said. But a 2004 law tightening the scope of local authority in Ohio may make the town’s fight more challenging.

In general, the varied nature of state doctrines makes it difficult to predict how different jurisdictions will rule on issues like zoning. While many states have a strong history of home rule with local rights preserved by statutes, other states keep a tighter leash on municipalities.

In Colorado, the state has sued local governments for enacting bans and other restrictions on the oil and gas industry. Activists are now pushing ballot initiatives that would preserve local control over drilling, and the state Legislature is considering a special session to address the issue.