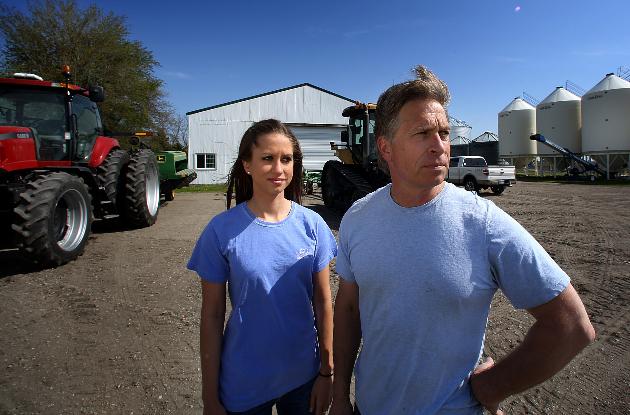 MOORHEAD – Four generations of Mark Askegaard’s family have farmed the land along the Red River here.

Now that land, and Askegaard’s livelihood as an organic farmer, is under threat.

Congress just approved plans for a massive $1.8 billion flood control project that would protect homes and businesses around fast-growing Fargo and Moorhead from the river’s frequent floods. But that protection comes at a cost. Instead of flooding urban areas, plans would reroute floodwater into surrounding countryside, right onto Askegaard’s homestead.

Askegaard, whose great-grandfather had the sense to build on high ground, could find his fields submerged under as much as 8 feet of water for days or weeks at a time. He and other farmers would be compensated, but the water would still be full of chemicals and runoff from farms upriver that could contaminate his fields and ruin his organic farming certification.

“Everything I’ve been trying to achieve for the last 15 to 20 years … would be all thrown out the window,” said Askegaard, who grows organic flax and soybeans for markets that include the Twin Cities. “It’s drastically changed our plans for the future. We don’t know what to do.”

The Fargo-Moorhead Diversion would be a colossal undertaking: a 36-mile ditch around Fargo, coupled with a flood control dam across the Red River. In the event of a severe flood threat, the project would divert floodwaters from the Red River and its five tributaries away from developed areas and into miles of North Dakota and Minnesota farmland and prairie.

Supporters say the diversion is the only way to protect the region from an inevitable catastrophic flood that could cost lives and billions of dollars. Opponents say the diversion’s main purpose is to allow fast-growing Fargo to expand into the flood plains that hem the city in on three sides, and they question why century-old farms should be sacrificed for the sake of urban sprawl.

In May, Congress authorized $846 million in federal support for the project, although the actual money will come in later legislation. North Dakota will foot 90 percent of the remaining cost of the project — about $900 million — while Minnesota would cover 10 percent of the nonfederal cost, or about $100 million.

But first, Minnesota is taking a hard look at one key part of the plan. The Minnesota Department of Natural Resources is in the midst of an environmental impact study of the proposed dam. If the DNR concludes that costs — to the environment, economy and lives upstream — are too high, it might not grant approval to build on the part of the river under Minnesota’s control.

The review leaves Minnesota in the odd position of evaluating what could greatly benefit a flood-prone city in North Dakota, but at great cost to some of its own citizens.

“The dam on the Red, that’s a big deal,” said Randall Doneen, who heads the DNR’s environmental review operations. “If there’s any alternative that wouldn’t have a dam on the Red, we’d be really interested.”

Those alternatives include flood retention projects upriver — which means south of Fargo-Moorhead, since the Red River flows north into Canada — that would store the floodwater in distributed storage areas before they could reach the cities.

But the region’s pancake-flat topography makes upstream retention difficult. There are few places that would make good temporary reservoirs for all that water, and they would need a number of those staging areas, which might only push the misery upriver, flooding even more farmers than the ones who already find themselves on the wrong side of the planned dam.

“Our project offers permanent protection,” said Brett Coleman, project manager for the U.S. Army Corps of Engineers, which has already signed off on its own environmental evaluation of the project. “There’d be over 200,000 North Dakotans benefited from this project.”

There’s no question that Fargo needs flood protection. The Red River has flooded 49 of the past 110 years. In fact, it flooded every year for almost two straight decades, from 1993 to 2011, and then again in 2013. The floods are a constant threat and disruption in a community that is a regional hub for two states.

“We’ve been dangerously close to losing flood fights in Fargo in the past,” said Keith Berndt, administrator for Cass County, which includes the city of Fargo. The estimate if they did lose to a 100-year flood: $10 billion and a number of lost lives, he said. “We can’t afford that kind of catastrophic damage.”

Flood fights are a way of life in Fargo, which sits 4 feet lower than its neighbors on the Minnesota side of the river. Spring runoff from the south flows north into areas still locked in a deep freeze. Ice dams can push the water over the riverbanks to spill across the prairie. When that happens, schools close, businesses give workers the day off, and everyone fills sandbags as the icy water inches closer to homes and buildings.

“Every year we’re fighting floods,” Berndt said. “The upside of that is that we’ve gotten quite good at it. The bad side is, one of these years we’re not going to be so lucky.”

Fargo was sick of sandbagging, sky-high flood insurance rates and the dampening effect of constant flood threats to their efforts to lure new businesses to town. The community about five years ago turned to the Army Corps of Engineers for a more permanent fix.

Part of that fix includes building a ring levee around the tiny North Dakota towns of Oxbow, Bakke and Hickson. The communities sit south of Fargo and, like the Askegaard farm, they sit in the middle of the area that would be flooded by the proposed dam. Crews were gearing up to break ground on the levee this summer.

The $71 million project will, among other things, rebuild a section of Oxbow’s golf course to make room for the ring dike. The Minnesota DNR fired off a letter in March warning that the project would violate state law if it forges ahead before the state finishes its environmental review, expected in the fall.

Supporters countered that the dike is a separate project, unrelated to the proposed dam. Opponents argue that the communities already have flood control structures; the ring dike would only be necessary if the region became a staging area for Fargo’s floodwaters.

“You don’t start a project before the environmental review is complete,” said attorney Jerry Von Korff, who has filed a federal lawsuit against the Army Corps of Engineers on behalf of residents in the proposed flood staging areas in Richland County, North Dakota, and Wilkin County in Minnesota.

The scope and cost of the project have ballooned over the years, and opponents question whether this latest supersized diversion project would have been necessary if Fargo — one of the fastest-growing metropolitan areas in the nation — weren’t expanding out into land that used to be flood plain with projects that include a shopping mall.

Instead, he said, they were lured by economic development. “If you have this land, and someone tells you they’re going to put up this big wall so you can put up a shopping mall, that’s going to be a really attractive idea,” Von Korff said.

Supporters say the project as it stands is the best way to help as many people as possible while hurting as few as possible. The flooded farmers will be compensated, and the region’s hub will be protected.

“We’ve worked very hard for the last five years to minimize the effect on the folks upstream and treat everybody fairly,” Berndt said. “Unfortunately, you can’t make everybody happy.”