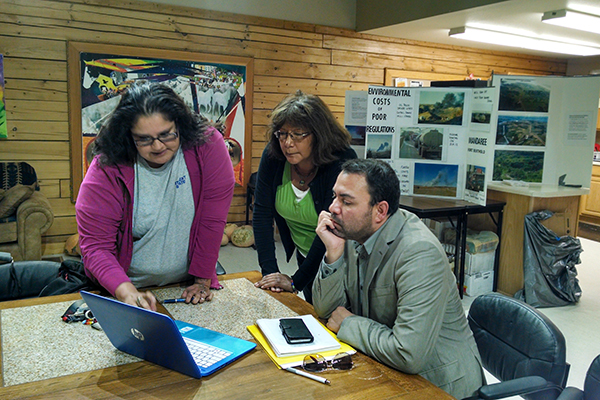 NEW TOWN, ND – Members of Fort Berthold Protectors of Water and Earth Rights (P.O.W.E.R.) and students from Nueta, Hidatsa, and Sahnish College (NHSC) met with staff from Senator Heidi Heitkamp’s office to discuss the Bureau of Land Management’s methane reduction rules, set to be released later this year. The rules focus on loss of revenue from faulty oilfield infrastructure and flaring.

P.O.W.E.R. members discussed how an Environmental Impact Study (EIS) was never conducted at Fort Berthold prior to the influx of oil and gas development. An EIS is required as part of the environmental review process under National Environmental Policy Act (NEPA) prior to developing an area, such as drilling and flaring, on reservation lands. This major oversight has resulted in heavy impacts on human health, with respiratory illnesses on the rise and environmental damage with reports of discolored snow around flares and changes to wildlife migration.

“When an oil company wants to apply for a permit to drill, they must have that gas capture program with their permitting papers. And that’s a good thing,” she said. “But when there’s a loophole in the backdoor that says – ‘You can get out the back way if you can claim it’s economically not feasible, we’ll allow an exemption,’ – that’s the part that kills us. And will literally kill us with the methane. Remember the young people, now. We are talking about them.” 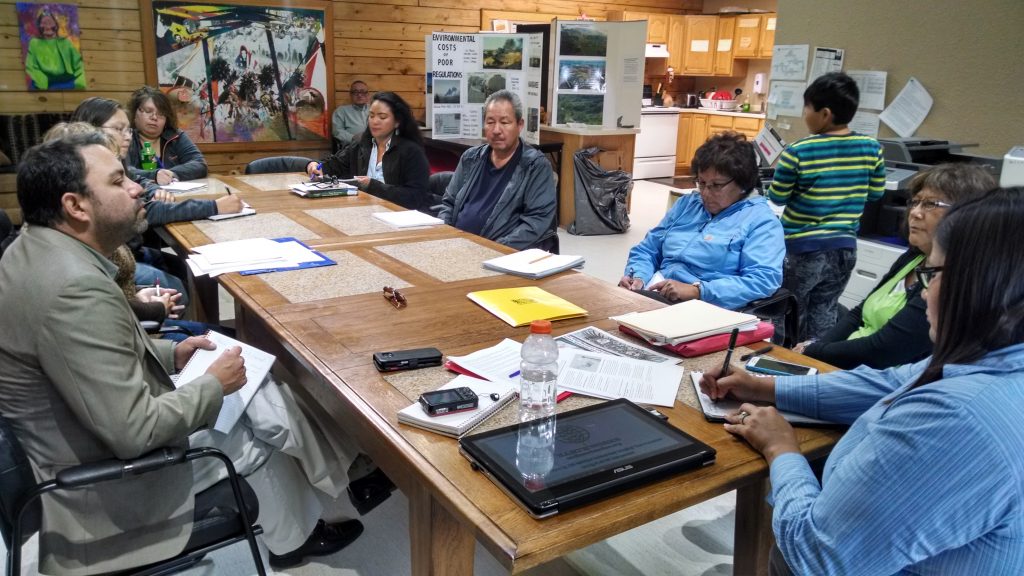 College students shared stories of impact to their health and landscape, including one student whose 4-month old child was diagnosed with asthma, which is not common at such a young age.

“We can show Heidi the evidence that lack of regulation is really impacting our daily lives. We can give you the data that we have to show that we really need these regulations enforced, we really need to be heard,” Laducer-Garrett said. “There is no active ambient air quality monitoring for this reservation. It surrounds us, all over around us. But there’s none here. And we are the epicenter of the Bakken boom.”

Earlier this year, Three Affiliated Tribes Chairman Mark Fox underscored the importance of cutting natural gas waste. “The oil companies don’t get paid, the tribes don’t get paid and the individuals that own mineral rights here on Fort Berthold do not get paid, so flaring is not a good thing,” he said.

The group had requested to meet with Senator Heitkamp staff Norman McCloud to ask that she openly support the BLM’s rules to curb flaring on the Fort Berthold Reservation. The rules will also ensure that mineral owners and the tribe will receive proper compensation for gases flared and vented.

P.O.W.E.R. members are expecting a response from Senator Heitkamp and are open to further discussion on improving air quality on the reservation.

“I think I can certainly get you some answer from Senator Heitkamp on that issue as well – where she stands in terms of the [BLM] regulation,” said McCloud.

“I would ask that the focus be on the youth. Especially the children and the babies who are living close to open flaring right here on Fort Berthold, who are consuming the methane that’s in the air,” said Bird Bear. “I wish she [Heitkamp] had come out here would’ve witness that [lack of gas capture] herself.”

The BLM methane rules should be released by the end of the year. Follow DRC on Facebook and online to stay updated.