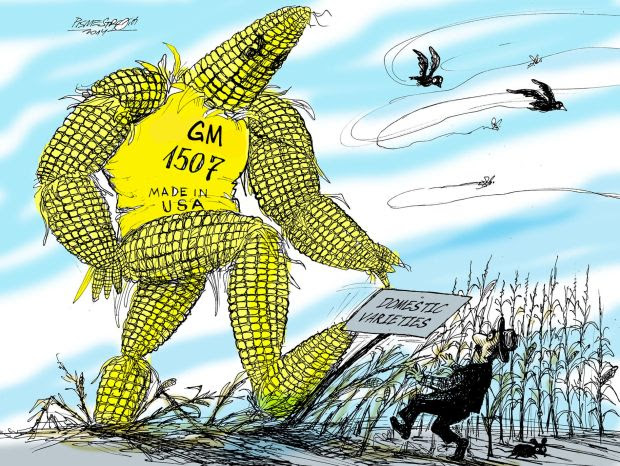 Another variety of unapproved, genetically engineered wheat has been discovered in the U.S., this time here in Montana. The finding underscores, once again, the weak regulations governing experimental trials of GE crops, as well as the vulnerability of our state’s most valuable export crop.

The U.S. Department of Agriculture announced the discovery on Sept. 26 in a press release about the closing of its investigation into how GE wheat ended up in an Oregon farmer’s field last year. The agency couldn’t determine how the GE wheat got there, calling it an isolated incident. GE wheat, developed by Monsanto, remains a regulated seed product that cannot be commercially grown in the U.S. Export markets continue to reject it.

The latest incident demonstrates the difficulty of containing GE crops and the inadequacy of U.S. policy. The federal government must heed this wake-up call and dramatically improve the regulation of GE crops.

Why unapproved GE wheat popped up more than a decade after trials were conducted at a Montana research station is unknown. There are many ways contamination can occur.

When companies want to develop a new GE trait, they conduct field trials before commercialization. Sometimes public universities assist with these trials. Theoretically, the USDA oversees these trials, but “oversight” is largely companies informing the agency that tests are underway.

While USDA struggles to find the source of the rogue gene, three interrelated problems plaguing the government’s oversight come into sharp relief. Our observations here are informed by a policy analysis we conducted on another GE crop, Roundup Ready alfalfa, recently published in the peer-reviewed journal Agriculture and Human Values.

– USDA does not impose firm requirements on how or where field trials are conducted. Companies themselves devise the procedures by which they attempt to “confine” the experimental genes. They also certify whether their own standards are being met. In other words, they regulate themselves.

– A compounding problem is the lack of specific information on field trials, making oversight nearly impossible. As the USDA’s own inspector general noted in 2005, the agency often does not collect basic data on the test sites it approves and is responsible for monitoring, including where and how the crops are being grown. This makes it extremely difficult for the government to monitor trials, ensure that performance standards are met, and trace back the source of GE contamination should it occur. The lack of basic information threatens farmers. Farmers near field trials would never know to take precautions or test their crops. Like the GE wheat discovered in Oregon, the GE wheat found in Montana was identified by accident.

– The most fundamental problem is inability to contain GE crops before and after market approval. The USDA promotes the idea of “coexistence,” the notion that GE and non-GE crops can be managed so that neither undermines the viability of the other. Yet the agency routinely approves field trials without assessing mitigation practices intended to contain GE seed and prevent contamination of non-GE crops. Effective containment must begin at the experimental stage. As the case in Huntley shows, contamination happens.

In the short term, halting existing field experiments on GE wheat is a sensible precaution. To its credit, the USDA says it will increase GE wheat inspections this year. This is an improvement, to be sure, since not every trial site is inspected. Yet, detecting the problem is one thing – preventing it is another. Contamination prevention policy is desperately needed.

To really move forward, Congress and the USDA must fix the rubber-stamp approach to trials. Strong requirements for preventing contamination must include enforceable (not voluntary) performance standards for confinement of genetic material, as well as active investigation to ensure compliance. Regulations must also provide for public disclosure of the GE crops being planted. The lack of transparency hinders the ability of non-GE farmers to take protective measures and thwarts meaningful public participation and independent scientific inquiry.

Without extensive regulatory improvements, the integrity of the country’s wheat industry – Montana’s leading cash crop – will continue to be threatened.

Kristina Hubbard of Missoula is director of communications at Organic Seed Alliance. Neva Hassanein is a professor of agricultural sociology at the University of Montana.