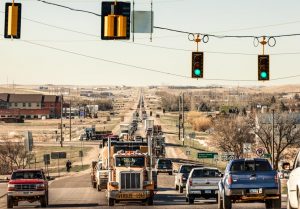 The population boom has created significant traffic and auto congestion on the roadways throughout the region. In 2014, the intersection of Highway 85 and Main Street in Watford City (pictured here) has seen an average of 18,625 cars per day according to the North Dakota Department of Transportation, up from 7,025 in 2011 and 2,700 in 2008…that’s an increase of almost 16,000 cars per day in just six years.