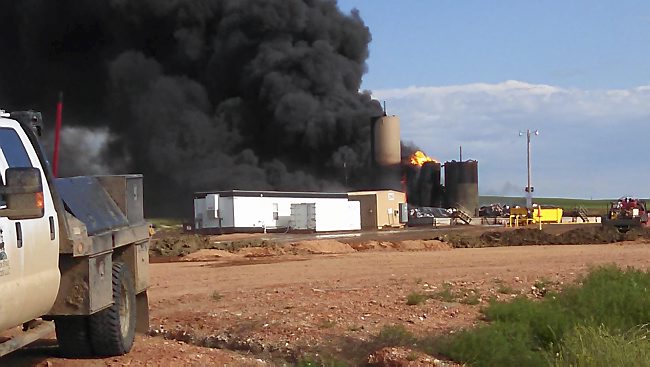 A lightning strike Monday afternoon caused an explosion, fire and spill at an oilfield site in McKenzie County in western North Dakota.

As of 7 p.m., the fire was still burning with no injuries reported.

“There are 11 tanks: nine saltwater and two oil. All of the tanks are destroyed,” he said.

More than 2,000 barrels of saltwater were released as well as 167 barrels of oil. One of the oil tanks was completely destroyed, the other — charred, but still standing — contains 230 barrels of oil, Samuelson said.

Alexander Fire Department initially responded to the incident, he said. However, policy stipulates that no one is allowed on site until a company representative arrives to monitor an emergency response.

“We’re letting it burn out, we don’t want people to get hurt,” he said.

Samuelson said payloaders were at the site building berms to try to contain the saltwater release.

He said McKenzie County sees one or two lightning strikes per year.

“This is very common when you’ve got fiberglass tanks — a lot of static electricity.”

It is not known how much saltwater was released offsite.