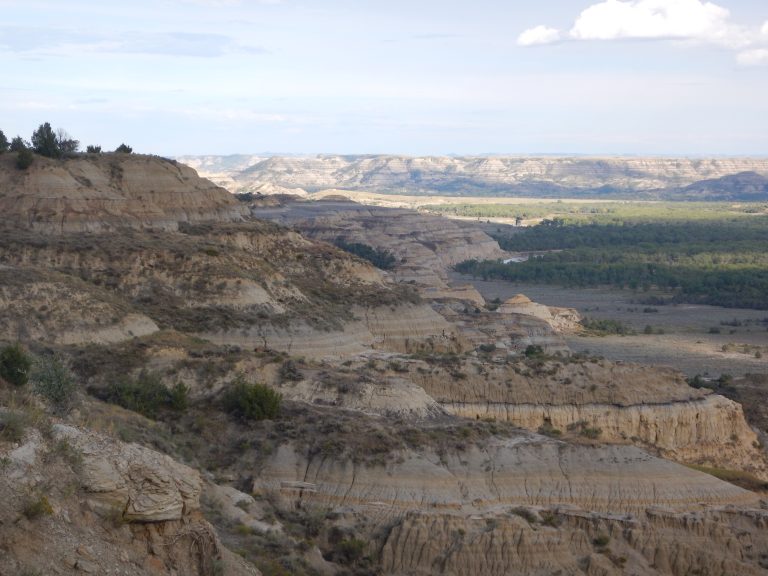 MEDORA — As Interior Secretary Ryan Zinke toured Theodore Roosevelt National Park on Tuesday, North Dakota conservationists called on him to also visit the site of a proposed oil refinery near the park boundary.

Zinke, who is spending four days in North Dakota this week, called the South Unit of the national park “an unexpected beauty” while stopping to tour the historic Peaceful Valley Ranch.

“From a kid who grew up in the foothills of Glacier Park, I was delighted to find a special place here,” said Zinke, who oversees the National Park Service within the Department of Interior.

The Badlands Area Resource Council sent a letter to Zinke on Tuesday inviting him to tour the site near Belfield where Meridian Energy proposes to build the Davis Refinery about 3 miles from the park boundary.

“We know that Theodore Roosevelt is a hero of yours, and we all know what a positive impact the western part of North Dakota had on him,” wrote Linda Weiss, chairwoman of the organization, an affiliate of the Dakota Resource Council. “We love this area, too, and would love to show it to you through our eyes.”

Meanwhile, a group led by the Dacotah chapter of the Sierra Club plans to rally outside of the Williston Basin Petroleum Conference on Wednesday as Zinke delivers the keynote speech, calling on Zinke to take a stand against the refinery location.

When asked about the refinery, Zinke said he had heard some discussion about the project during his tour but didn’t have all of the information.

“We’re gathering the facts,” Zinke said. “The decisions are based on science, best practices. We’re looking at it.”

Gov. Doug Burgum, who accompanied Zinke on the tour, interjected and said state agencies are working through the permitting process for the refinery.

“The Park Service and all interested parties can participate in the process, but there isn’t actually anything from a permitting process related back to Interior because it’s on private land miles from the park,” Burgum said.

During the park tour, Zinke also emphasized the need to address a backlog of deferred maintenance, which is nearly $43 million at Theodore Roosevelt National Park.

After the park tour, Zinke toured a drilling rig near Killdeer with Continental Resources CEO Harold Hamm and other company officials.

Hamm told Zinke that Continental has drilled 1,680 wells in the Bakken with plans to drill 4,600 more.

Ahead of the meeting, Dave Flute, chairman of the United Tribes of North Dakota, said tribal leaders were looking forward to meeting with Zinke to share the good things happening in Indian Country as well as some challenges that the Department of Interior can help address.

“It’s a good sign of respect, it’s a display of acknowledgement of tribes in the state,” said Flute, chairman of the Sisseton-Wahpeton Sioux Tribe.

The Fort Berthold Protectors of Water and Earth Rights called on Zinke to visit the Mandan, Hidatsa and Arikara Nation in the heart of the Bakken, where natural gas flaring is highest in the state.

Zinke’s schedule does not include a stop at MHA, but the deputy Bureau of Indian Affairs director visited Fort Berthold on Monday and Zinke said he meetings scheduled with MHA Chairman Mark Fox.

Flute said it would have been great for Zinke to visit the tribal nations, but he’s pleased he’s reaching out to representatives of all five tribes.

“I’m sure each tribe will give him a special invite to visit their tribes respectively,” Flute said.