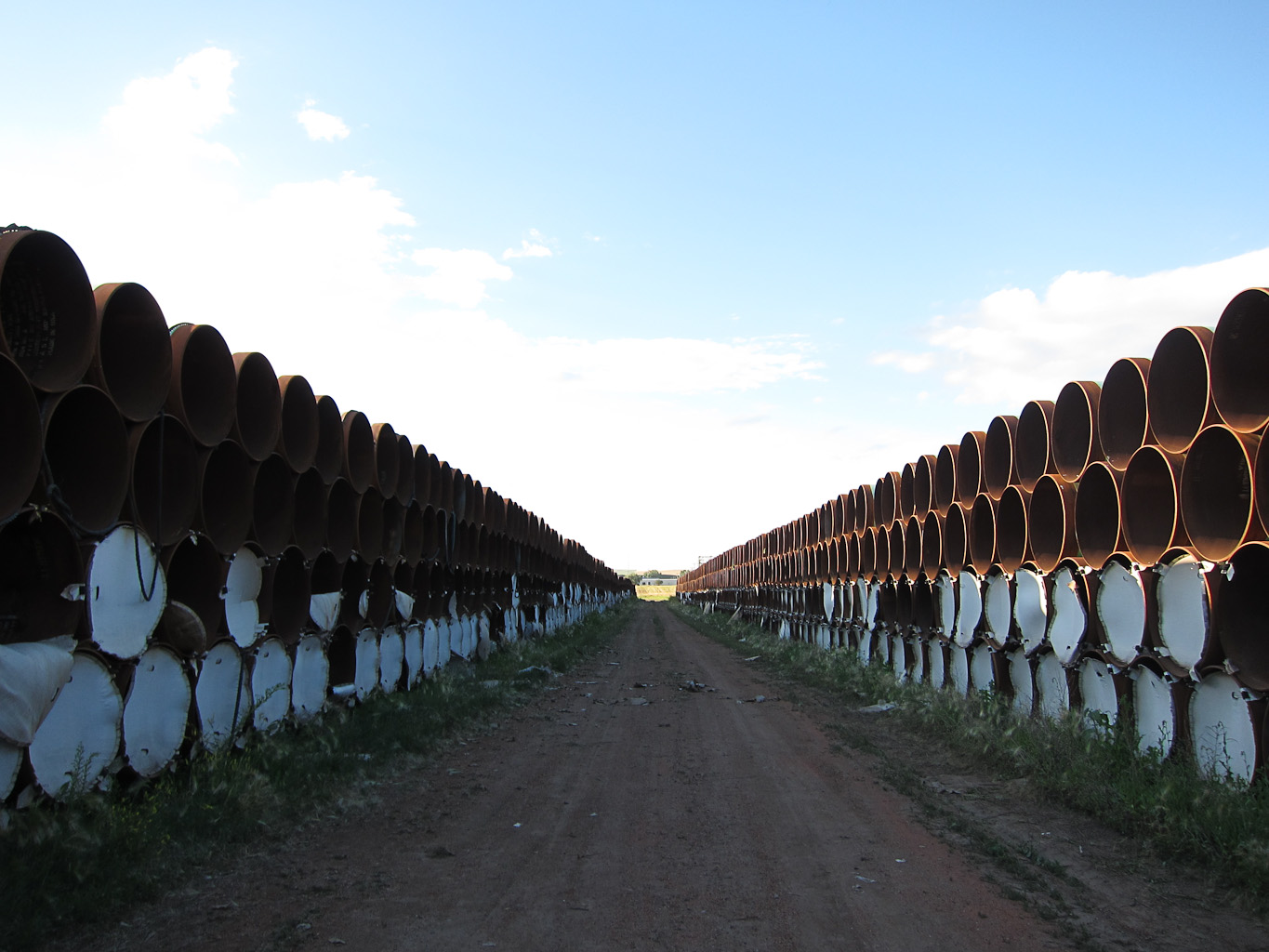 [colored_box color=”eg. blue, green, grey, red, yellow”]Streets lined with pipes fill this 83-acre field near Gascoyne, ND, leased by TransCanada, the company seeking to build the pipeline. TransCanada says the pipes are stored safely. A protectant is used on the exposed lines. Those near the ground are covered, as shown here, so snow and small animals can’t get in.(Amy Harder)[/colored_box]

By Paul Seamans and Darrell Garoutte

TransCanada is so intent on winning approval for their proposed Keystone XL tar sands pipeline from Canada, they are spending millions on media ads and making donations to communities along the route. In recent articles, TransCanada has stated that it has obtained 100 percent of the easements in Montana and South Dakota from willing landowners. The operative word here is “willing” — and that word misrepresents what really happened.

We are ranchers in Montana and South Dakota along the route of the proposed Keystone XL pipeline. While attempts have been made to paint the picture that our states are unanimously in favor of this project, this is, of course, not true.

We are here to tell you that just because a landowner signed an easement with TransCanada, it does not mean they support the building of the project.

When the pipeline project was first proposed and we learned that our ranches were in the path, we were concerned about the protection of our drinking water, unsafe roads during construction and liability in the case of spills or other problems. Years later, and with the permit decision imminent, our fears have not gone away — quite the opposite.

As we have become more educated on how the tar sands oil is extracted and what happens to the environment, a whole new set of concerns have arisen. We now know that the tar sands oil is not like conventional crude and that it needs to be thinned down before it will flow, using carcinogenic chemicals that can’t be removed by any water-treatment plant. We now know that if a spill occurs the oil will separate from the diluents and will not float in water like regular crude but will sink to the bottom of a stream and are, thus, much harder to clean up. We have visited with our indigenous friends from Alberta and have learned about the destruction to the environment that is caused by the mining of tar sands crude and of all the cancer cases that are now showing up in their communities.

To have more of a voice, we joined with Northern Plains Resource Council in Montana and Dakota Rural Action in South Dakota — statewide, grassroots organization — as did many of the landowners along the Keystone XL route. We negotiated the best easement agreement we could with TransCanada. But, most of our affected members most assuredly did not sign willingly. We signed under duress, knowing that we did not have many other options.

Because of lax state eminent domain laws, TransCanada was able to obtain the power of eminent domain — condemnation — in Montana and South Dakota. Eminent domain laws are such that a judge can only award damages based on the value of the land. The judge, or jury, cannot allow for punitive damages. A landowner can receive no protection from noxious weeds, shoddy reclamation, spill clean up, or other concerns via the eminent domain process. It is very seldom that a property owner prevails in a condemnation proceeding. The landowners in Montana and South Dakota knew this and so they settled before going to court, hoping to obtain a safer pipeline (on their property) by the negotiation process.

One might ask why TransCanada would expend such effort in trying to influence public opinion. The simple answer is that the Keystone XL pipeline is in trouble and TransCanada knows it. Opinion polls have shown a continual erosion of public support for the Keystone XL. The United States is close to being self-sufficient in oil production and TransCanada fears that the American people are realizing that the Keystone XL is nothing more than a foreign-owned pipeline crossing privately owned land in the United States for the purpose of shipping Canadian oil to the Gulf Coast where it will go on the world market. It will be of minimal benefit to the U.S., yet threatens farm and ranch land by both its construction and operation (prior completed legs of the TransCanada Keystone pipelines have been disastrous). Increased greenhouse gas emissions from tar sands mining and burning disproportionally affect landowners by way of drought and other extreme weather patterns.

To be approved, Keystone XL must be in the “national interest.” Where do we draw the line on national interest when it comes to energy decisions? As people on the front lines of this issue, we believe that it’s somewhere safer and cleaner.

Paul Seamans is the former board chairman for Dakota Rural Action in South Dakota; Darrell Garoutte is the chairman of the McCone County Affiliate of Northern Plains Resource Council in Montana.