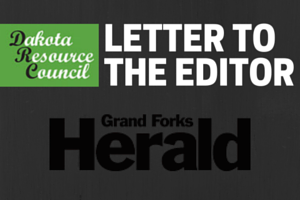 Originally published in the Grand Forks Herald on 2.5.2016
by Dorothy Vensch of New Town, ND

We want good leadership. But the opinion expressed regarding the job performance of the North Dakota Industrial Commission is completely the opposite of mine.

Good leadership is characterized by foreseeing potential problems, creating and implementing policies to minimize or prevent problems and having contingency plans for problems that occur. Instead, we’ve had the following examples of trying to fix problems after their occurrence.

▇ Flaring. Instead of realizing in 2006, the beginning of the Bakken boom, that excess gas and few pipelines would cause wasteful flaring, plans to reduce flaring were implemented in 2014, after national criticism.

▇ Energy corridors. Look at the map of wells on the Department of Mineral Resources website. There are few places where corridors are spaced 4 miles apart.

▇ Saltwater and oil spills. These have been occurring since the beginning of the Bakken boom. In 2015, a study was done at the direction of the Legislature after requests from landowners. The study cost $1.5 million and was to determine the causes of and solutions for spills. New rules won’t be effective before 2017.

Mikesh says most North Dakotans don’t want “a free for all,” but that’s exactly how I would describe the past few years in western North Dakota. The balance between economic prosperity and everything else that affects the safety and quality of life for residents should be the Industrial Commission’s and all state leaders’ primary concern.