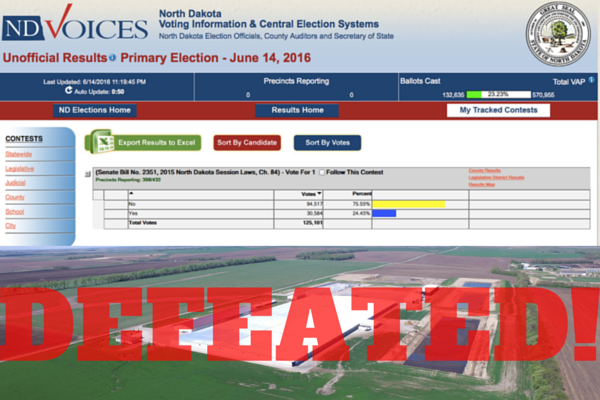 BISMARCK, ND— DRC members and allies celebrated a victory on Tuesday night after North Dakotans overwhelmingly rejected a haphazard law passed by the state legislature to open the floodgates to corporate farming.

“It was a hard-fought campaign and we worked diligently to educate North Dakotans and turn them out to vote. We are very pleased with the result,” said DRC Chair Craig Scott, who lives in Burleigh County. “The fight is not over, and we will continue organizing and building people power to make North Dakota a great place to live.”

Since 1932, North Dakota’s anti-corporate farming law has facilitated the growth of one of the strongest agricultural economies in the world. Measure 1 was a referral of SB 2351, a law rushed through the 2015 legislative session by proponents of corporate farming in an attempt to increase the number of cows and pigs in North Dakota. The law would have allowed non-family corporate ownership of land for concentrated animal feeding operations (CAFOs).

“This may have increased the number of animals but it would have decreased the number of family farmers and squeezed the wealth out of rural communities,” said DRC member Father Tom Graner of Pierce County. “People in North Dakota made it clear they understand the dangers of corporations running our farms.”

The defeat of Measure 1 is a testament to the power of ordinary people standing up and making their voices heard. DRC investigated what happens in other states with corporate agriculture operations and found stories of destruction, intimidation, and devaluation.

“Throughout other parts of our country that allow corporate farming, it is very clear that large confinement dairy and hog operations do not increase rural employment or promote rural economic development,” said DRC member Jeri Lynn Bakken of Adams County, responding to the impacts of corporate farming on other states. “Corporate feeding operations employ far fewer and lower-paid workers than the family farmers that they inevitably displace.”

In the shadow of the campaign against corporate farming and Measure 1, the town of Buffalo, ND is dealing with a proposed 9,000-hog factory. This is precisely the type of so-called animal agriculture North Dakotans rejected by voting No on Measure 1. A county-level approval decision is still pending. The full suite of videos, plus more information about Measure 1 and anti-corporate farming efforts, is available at http://drcinfo.org/familyfarms.

“Men like my grandfather understood the way to build strong communities was to ensure family farmers owned the land they worked and lived in the communities they served,” said Bakken. “By rejecting corporate farming, North Dakota becomes the trendsetter for a non-corporate model of modern agriculture that people around the country, and even the world, will want to emulate.”