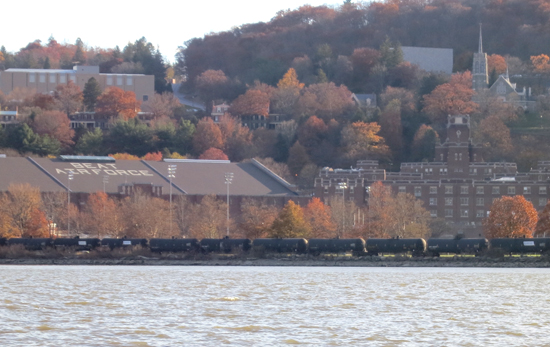 A Bakken crude oil train rolls along the Hudson River at West Point, N.Y., in 2013. Photo by Capt. John Lipscomb.

Two top New York officials are calling on North Dakota Gov. Jack Dalrymple (R) to make oil firms strip volatile compounds out of their crude before moving it by rail, according to a letter sent yesterday.

“New York State is concerned with the volatility of Bakken crude oil and believes all the states subject to the boom continue to be vulnerable to the impacts of derailment, spill, fire or explosion,” said the letter, signed by Joe Martens, commissioner of the New York Department of Environmental Conservation, and state Department of Transportation Commissioner Joan McDonald.

The North Dakota Industrial Commission, led by Dalrymple, is currently weighing rules to require crude-by-rail shippers to “stabilize” oil from the Bakken Shale play by separating flammable natural gas liquids. The chemical composition of Bakken crude has come under scrutiny following a series of recent oil train derailments and explosions, with federal regulators and environmental groups claiming it is more hazardous than other types of oil.

The New York government’s letter said North Dakota is “uniquely positioned” to oversee treatment of crude at the wellhead, before it enters the federally regulated freight network and escapes state-level jurisdiction.

“Taking action to reduce the volatility of Bakken crude oil before it ships is a common-sense solution that will provide an added measure of safety,” McDonald said in a statement announcing the letter.

New York is a key oil-by-rail hub en route to East Coast refineries. The state’s Democratic governor, Andrew Cuomo, who is seeking re-election next month, has repeatedly urged federal regulators to act quickly on a “comprehensive” set of crude-by-rail rules now weaving their way through the U.S. Department of Transportation.

That DOT rulemaking package did not include measures to stabilize crude, although the agency has hinted that it may tackle the issue later.

Some crude producers in North Dakota already process oil at the wellhead before offering it up for shipment, but the oil industry has been more skeptical of requiring costlier stabilization plants.

Kari Cutting, vice president of the North Dakota Petroleum Council, which represents the state’s oil and gas industry, said that oil producers have already invested $2.5 billion to $5 billion in “well-site conditioning,” which filters out some dissolved natural gas liquids and brings Bakken crude to well within regulatory requirements.

She said that despite New York’s letter, federal officials with the Pipeline and Hazardous Materials Safety Administration, part of DOT, have not yet raised the issue of stabilization.

“If there was a simple answer, then PHMSA would have implemented it in their notice of proposed rulemaking,” Cutting said in an interview yesterday. “They chose to focus on the robustness of the rail car, the speeds and other stipulations. … [T]hey did not focus on the commodity itself, so I point to that as being very telling on where the facts and the science lie.”

Dalrymple’s office did not respond to requests for comment yesterday.