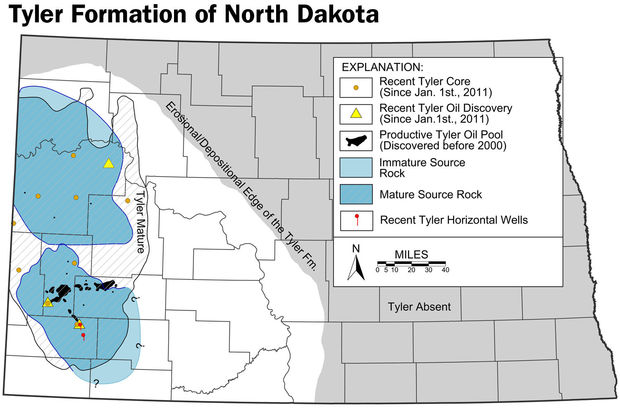 The two Marathon Oil Co. wells — both drilled in an area east and northeast of Amidon in Slope County — have been closely watched as a harbinger for what’s to come both for the county and the formation itself.

Both were drilled horizontally as opposed to straight down vertical wells and recently came off of confidential status.

One, the Rundle Trust well, about 10 miles northeast of Amidon, had initial production of 88 barrels and in the months from March through July, produced an average of 15 barrels per day.

The second well, the Powell well, about 10 miles due east of Amidon, has been drilled, but not hydraulically fractured yet. It’s unknown whether Marathon will proceed with fracking, an expensive piece of well development, based on lackluster results from the Rundle Trust well.

The Tyler formation has been hailed as a new zone of opportunity for horizontal drilling techniques by Lynn Helms, Department of Mineral Resources’ director.

Last year, primarily from older vertical wells, the formation accounted for less than 200,000 barrels of oil, from some 37 wells.

Department spokeswoman Alison Ritter said there is only one other well permit issued in Slope County and it remains on confidential status for now.

She said the formation — in terms of how it will respond to horizontal drilling and fracking — is still in the discovery stages and it will be up to Marathon, in this case, to decide what level of oil production is economical.

“They’re still trying to find the edges of the play where it’s most successful,” she said. “There’s not enough data to say whether fracking is successful. It’s still in the very, very early discovery.”

Slope County Auditor Lorrie Buzalsky said there is some talk locally about how the wells are doing. Reaction is mixed, since not all residents desire oil development in the county, she said.

There is an older producing oil field around Marmarth that generates oil revenue for the county’s general fund, along with some royalties for oil produced on federal lands that goes to roads and schools, she said.

Ritter likened the Tyler well results to the earlier days of probing the Bakken, though compared to the Marathon Rundle well with 88 barrels of initial production, wells in the Bakken have typical initial production between 1,000 and 3,000 barrels per day.

The Bakken and associated Three Forks formation contains more than 7,000 wells and produced 286 million barrels in 2013.

Marathon was not able to comment for this story before deadline.