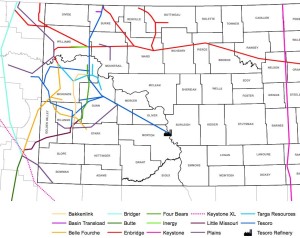 From the Associated Press:

Thousands of miles of underground gathering pipelines in North Dakota are being mapped under new rules that require companies to report the locations to the state, a change that is being hailed by regulators, industry and the state’s biggest landowner group.

The U.S. Pipeline and Hazardous Materials Safety Administration monitors pipelines that move crude oil to market, while large natural gas pipelines are overseen the state’s Public Service Commission. But until this year, the network of pipelines that crisscross the state gathering oil, natural gas, drilling byproducts and other liquids went unmonitored by state and federal regulators.

The North Dakota Legislature this year passed a broad measure that requires pipeline owners to submit the whereabouts of gathering pipelines and notify regulators when the lines are abandoned. A $75 million fund from oil tax revenue also is being established to pay for pipeline reclamation, if the pipeline’s owner is not located.

But for proprietary reasons, the rules allow only regulators, the pipeline owner, the landowner where the line is located and maintenance crews to have access to the location database.

“Obviously, the idea is to gain oversight on gathering pipelines. It’s terribly needed,” said Alison Ritter, a spokeswoman for the state Department of Mineral Resources.

“It’s a step, a big step and a turning point for the state,” added Don Morrison, executive director of the Dakota Resource Council, an environmentally minded landowner group with more than 700 members in North Dakota. “I hear stories all the time about farmers and ranchers discovering pipelines on their land that they did not know where there.”

Ritter said there are more than 18,000 miles of so-called gathering pipelines in the state, and the mileage is expected to nearly double over the next several years with the booming development in western North Dakota’s oil patch.

The new rules require owners of pipelines placed into service between August 2011 and June 2013 to report their locations to the state within 18 months. Owners of pipelines built after June 2013, must tell regulators the location within six months.

Gathering pipelines installed before August 2011 are not covered by the new rules, though most have been installed after that, Ritter said.

“The biggest chunk of the gathering lines is covered,” she said.

Industry groups support the new rules, which “will further enhance the safety, monitoring and locating standards of the build out of our pipeline infrastructure,” said Ron Ness, president of the North Dakota Petroleum Council

Ritter and Ness said the North Dakota regulations for gathering pipelines are among the most stringent in North America.

“Alberta, Canada is the only other place we know of that has these rules,” Ness said.