Could North Dakota be a model for how to reduce flaring? – Casper Star Tribune 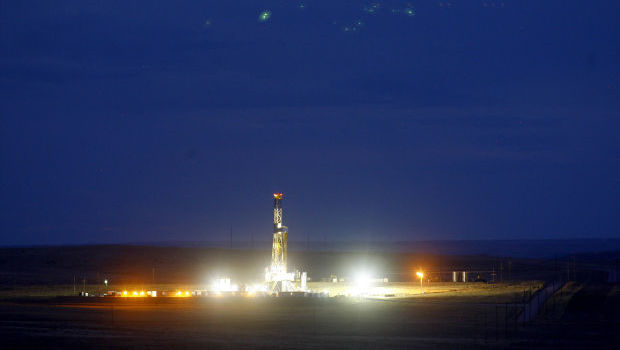 [colored_box color=green]A rig near Douglas is flooded with light as dusk turns to night. The orange glow at right is gas being flared off.[/colored_box]

Could North Dakota be a model for how to reduce flaring?

In 2011, North Dakota’s oil wells flared an average 4.5 billion cubic feet of natural gas every month. It was the equivalent, at the time, of burning $18 million every 30 days or so.

Even the state’s industry friendly governor, Jack Dalrymple, was alarmed.

“The governor said, ‘You figure out how to fix this or we will,'” North Dakota Petroleum Council President Ron Ness recalled recently.

North Dakota’s high flaring volumes have long made it a black sheep among oil and gas producing states. In 2013, companies in the state flared 107 billion cubic feet of natural gas, or about one-third of the 348 billion cubic feet produced.

Alaska, Texas and Wyoming, by contrast, flared fewer than 2 percent of their production, according to the Western Organization of Resource Councils, a coalition of landowner groups across the West.

But a new plan by North Dakota regulators to curtail flaring has some wondering if the state could be a model for how to limit the practice of burning off natural gas produced at oil wells.

The strategy, implemented last year, sets a statewide flaring target, empowers regulators to curtail production if companies do not meet the state goal and calls on firms to submit plans for how they intend to capture gas before a well is drilled.

At the beginning of 2014, 36 percent of North Dakota’s production was flared. By year’s end that figure was 24 percent.

“The program has some weaknesses, but it is interesting for other states to look at,” said Mark Trechock, the former director of the Dakota Resource Council, a landowners group. “They came up with some statewide reduction goals and requiring data collection from companies. That is a step in the right direction.”

The North Dakota effort comes at a time when Wyoming is set to reevaluate it’s own flaring regulations. Gov. Matt Mead identified flaring as one of three oil and gas reforms to be addressedby the state’s Oil and Gas Conservation Commission. The commission is addressing the minimum distance between homes and drilling rigs, and has yet to take up flaring.

Industry representatives and environmentalists in Wyoming say it is too soon to tell if the North Dakota model can work in the Cowboy State. Among other factors, it is not clear the extent to which a slowdown in drilling has contributed to the drop in flaring.

There is also this: North Dakota, for all its progress, still flares more than any other state. While the state’s flaring percentage fell over the course of 2014, the 11.3 billion cubic feet burned off in December was slightly more than the 11.2 billion cubic feet sent skyward eleven months earlier.

“I continue to believe the guidance the commission is working under right now is really the best thing we can do in Wyoming,” said John Robitaille, vice president of the Petroleum Association of Wyoming.

Environmentalists, for their part, contend that flared gas not only represents a waste, but a public health concern. Natural gas burned off into the atmosphere contains carbon monoxide, sulfur dioxide, nitrogen oxide and carbon dioxide, among other pollutants.

They point not to North Dakota, but Alaska as a model for how to regulate flaring.

Companies working in The Last Frontier are only allowed to flare in limited instances such as emergencies or to make repairs. Alaska also requires firms to submit detailed reports explaining why they flared and how much gas was burned off.

“I think a lot of it has to do with they (Alaska) don’t want to waste the resource. Once it’s gone, it’s gone,” said Jon Goldstein, a policy analyst at the Environmental Defense Fund. “They weigh strongly toward conserving the resource and ensuring it is put to good use.”

Wyoming’s regulations, he added, are already more stringent than North Dakota’s in some areas. North Dakota allows companies to flare unlimited amounts for the first year after a well begins production. After that, the flared gas is taxed.

Flaring is largely a function of the economics behind today’s shale oil plays. Oil, until it’s recent slide, was valuable. Gas was a cheap secondary product. And the infrastructure needed to capture it, pipelines and processing plants, is expensive.

North Dakota reports such high flaring volumes in large part because the state lacked gas gathering infrastructure at the beginning of the drilling boom. Operators in the state also underestimated the size of the gas reserves they were tapping.

The state’s new strategy seeks to solve that problem by ensuring companies detail plans to connect wells to pipelines and gas gathering plants during the permitting stage.

“It has changed that paradigm of what’s going to happen to that gas before day one,” said Ness, the president of the North Dakota Petroleum Council. “It has front-loaded the process to ensure the processors and operators are providing the same information back to the state.”

North Dakota’s plan calls for reducing flaring to 23 percent of all production by Jan. 1. That will fall to 15 percent by the beginning of 2017 and 10 percent by 2020.

Wyoming has experienced a similar problem on a much smaller scale in Laramie and Converse counties, where little gas infrastructure existed before the most recent uptick in oil drilling.

Companies generally only flare a fraction of what they seek permission to burn off. Permit requests nonetheless remain one of the most accurate ways to track flaring in Wyoming since regulators only began to record flare volumes on company’s monthly production reports last year.

Mark Watson, Wyoming oil and gas supervisor, said North Dakota’s new permitting provisions are an element that could be duplicated in the Cowboy State.

He noted Wyoming regulators are already asking companies to submit their gas gathering plans in advance, but added the state could benefit from formalizing the arrangement.

For now, however, North Dakota has a ways to go before it can claim to be a model for other states.

“They are not going to reach 10 percent until 2020,” said Trechock. “That’s five years away. Even if we get there, and assuming other states are at the same level, 10 percent would be the leading flaring state in the union right now.”