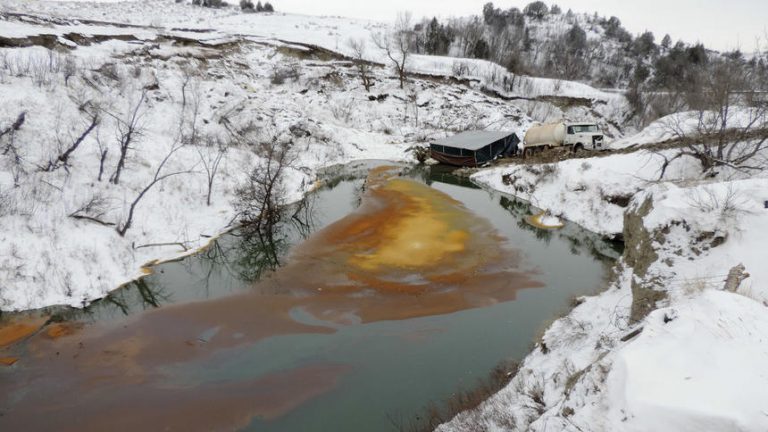 FARGO — A recently adopted higher threshold for reporting spills in North Dakota’s Oil Patch, if applied to a recent five-year period, would mean 80 percent of oil spills and 68 percent of toxic saltwater spills would have gone unreported, an analysis by The Forum shows.

The higher reporting threshold only applies to oil wells drilled after Sept. 1, 2000, when new standards for well construction, including measures to contain spills, took effect. In analyzing spill reports compiled by the North Dakota Department of Health, it wasn’t possible to distinguish spills from wells built before or after the new well standards.

Ron Ness, president of the North Dakota Petroleum Council, an industry advocacy group, said the vast majority of spills are contained. He compared spills contained to a well pad to spilling milk on a tray.

“It’s the spills off the pad that need the attention,” he said, adding that the industry has adopted steps to prevent or minimize spills.

Over time, the statistical influence of big spills can be diluted. A study that examined spills from 2001 to 2014 determined that for every 10,000 barrels of oil and saltwater handled, one barrel was spilled.

That 2015 study, by the University of North Dakota’s Energy and Environmental Research Center, noted that pipeline spills had declined slightly during the period and concluded that “a very small number of high-profile, large pipeline spills have greatly skewed the trend lines.”

Another 50,259 barrels of oil and 126,670 barrels of brine, a byproduct of petroleum drilling, also spilled, but were contained, according to the field reports, logged in a database maintained by the North Dakota Department of Health, whose inspectors investigate spills and supervise cleanups.

State lawmakers agreed to increase the reporting threshold after industry representatives complained that too many resources were being devoted to small, contained spills. Landowners, however, urged officials to keep the 1-barrel reporting requirement.

But the totals are understated, since more than 1,000 reports involving spills of less than half a barrel appear as zeroes in the database, and therefore could not be counted in the tallies calculated from database figures.

Also, the director of the state’s spill inspection program cautioned that many of the spill totals are field estimates, so a precise tally isn’t possible, and the initial estimates are often revised.

“We will never truly know how much spilled,” said Bill Suess, who directs the North Dakota Department of Health’s spill investigation program. He said the public is more focused on spill volume than officials are, whose concern is ensuring proper cleanup.

“The point is they need to clean it up,” Suess said. “We’re not really wrapped up in that volume so much.”

‘Remediation is not cheap’

An environmental advocate said the major problem involving tracking Oil Patch spills is the reliance on self-reporting on the part of the petroleum industry. Spills must be reported within 24 hours.

“Actually, I don’t believe that all spills are being reported,” said Nicole Donaghy, an oil and gas field organizer for the Dakota Resource Council, an environmental watchdog and advocacy group.

Members of the Dakota Resource Council have witnessed spills that weren’t reported for days or weeks, increasing the risk of contamination, she said. In one case, a landowner near Killdeer discovered a saltwater leak near her home when she noticed an odor in her drinking water, Donaghy said. The aquifer did not appear to be impaired, however, she said.

Oil drillers and service firms are good about reporting spills, Suess said. Some firms report all spills, even in cases that don’t require a report.

Companies operating in the Oil Patch have an incentive to comply with regulations and cooperate with regulators, including reporting spills, Suess said. Many companies report all spills, even small spills that don’t have to be reported, he said.

“Some companies, they report everything for insurance purposes,” Suess added.

Also, the philosophy of North Dakota regulators is to withhold a decision about a fine, using the threat of a fine as an incentive to prod the company to thoroughly clean up a spill, to the satisfaction of inspectors.

“The amount we can fine them is so small in comparison to the cleanup,” Suess said. As an example, he cited North Dakota’s largest oil spill, a Tesoro pipeline leak near Tioga in Williams County in 2016 that spilled 20,600 barrels, or 865,200 gallons, in a farmer’s field.

The cleanup, still underway, cost the company $53 million as of a year ago, Suess said.

“Remediation is not cheap,” he said.

North Dakota health officials do not track the volume of oil and saltwater spills. They do track the number of general spills throughout the state, which include agricultural and other spills, but the majority are oil field spills, and the trend line shows a gradual decline from 2013 through 2017, Suess said.

Training and the skill level of oil field workers improved after the pall-mall days leading up to the peak of the oil boom a few years ago, which helps to explain the decline in the number of spills, Suess said.

“They were hiring people like crazy,” he said. When workers are in high demand, “You’re taking the whole crop, you’re not getting the cream of the crop.”

During the downturn that followed, oil companies kept their best workers, improving the workforce skill level, Suess said. Similarly, he added, consolidation that came with the industry shakeup eliminated the weaker companies, with the better-performing firms as the survivors.

“Natural selection kind of works, if you will,” Suess said.

The 2015 UND study resulted in 23 regulatory and policy recommendations. So far, 15 regulatory recommendations, including creation of a new pipeline inspection program, have been implemented, said Alison Ritter, a spokeswoman for the North Dakota Department of Mineral Resources.

“That report laid the foundation for an entirely new inspection and enforcement program,” she said.

That recommendation, although widely supported, has not yet been implemented because of the state’s budget crunch.

“The funding wasn’t there,” although oil regulators were “strongly advocating,” Ritter said.

A study by Duke University researchers found that spilled wastewater from “fracked” oil wells — a technique called hydraulic fracturing — contained contaminants including salts as well as lead, selenium and vanadium.

“Until now, research in many regions of the nation has shown that contamination from fracking has been fairly sporadic and inconsistent,” Avner Vengosh, a Duke geochemist and the lead author of the study, said when the study was released. “In North Dakota, however, we find it is widespread and persistent, with clear evidence of direct water contamination from fracking.”

Suess said the oil field spills in North Dakota have not harmed human health. “We have no documented human health risk from any of these spills,” he said. There have, however, been livestock deaths, usually one or two at a time when a stream or stock pond is fouled.

“It’s not very high,” Suess said of cattle deaths, which the department does not track. “Of all the spills we’ve had, it’s probably less than a dozen cows that I can think of,” during the three years he’s been with the spill investigation program.