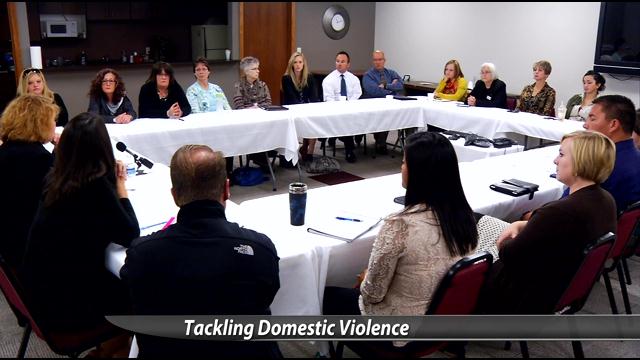 By Jennifer Deming
CLICK HERE TO WATCH VIDEO
There’s been a 60 percent drop in the rate of domestic violence across the nation.

Representatives from law enforcement, advocacy groups and officials in the Bismarck-Mandan area met today in an effort to reduce the numbers.

Their main cause for concern is that there’s more than just oil being shipped out of the Bakken.

“In North Dakota the numbers are going up,” says Diane Zainhofsky, executive director of the Abused Adult Resource Center. “Absolutely, it’s because of the oil.”

Zainhofsky runs the Abused Adult Resource Center. They operate in seven counties across the state and receive nearly half of their funding from federal and state grants.

Last year, they helped almost 1,200 new victims of domestic violence. She says they’ve seen a rise in the number of victims coming from the oil fields.

And with resources stretched, AARC needs more money from the state to help tackle the crisis.

North Dakota received over $3.5 million in 2013 to combat domestic violence, but officials say more is needed.

If you or someone you know has been affected by domestic violence visit abusedadultresourcecenter.com for more information or call the 24/7 hotline at 1-866-341-7009.