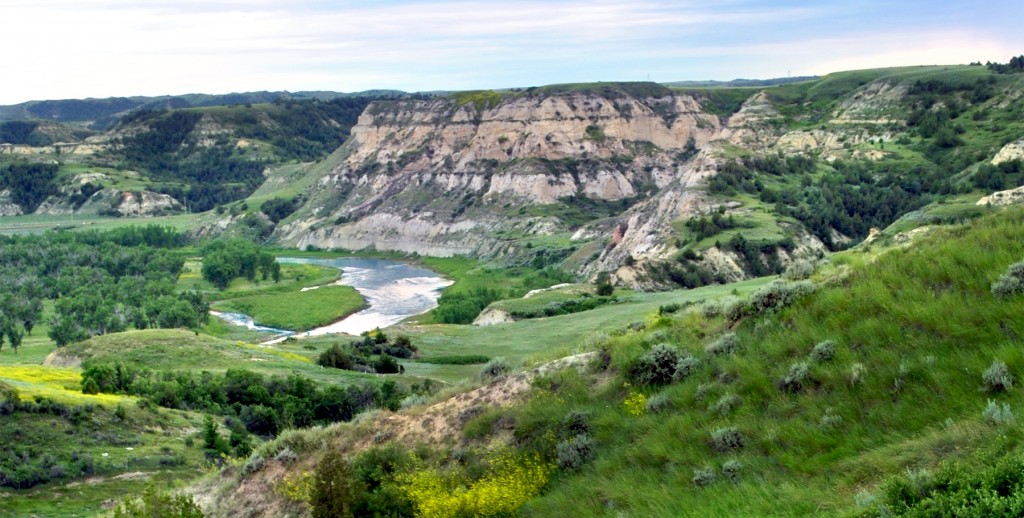 These tiny tongues of fire burn bright against the dark prairie just beyond the boundaries of Theodore Roosevelt National Park in the Badlands, where the man who later became the nation’s 26th president sought solace after his wife and mother both died unexpectedly on the same day in 1884 in his native New York.

Today, the resurgent American oil industry is tapping into this rugged landscape, so the vistas that soothed Roosevelt’s grief and helped instill his zeal for conservation now include oil rigs and flares used to burn off natural gas that comes to the surface.

Oil development is strictly forbidden within the park itself, but park officials worry that the flares, lights and noise from drilling just beyond the protected area are sullying the natural spaces cherished by Roosevelt as a bespectacled young man in his mid-20s.

Visitors know “that the park experience is much more than waking up inside the borders and looking around,” said Nick Lund, landscape conservation program manager at the Washington-based National Parks Conservation Association. “Things that happen outside the park really affect the experience of visiting, both from a visitor standpoint and from an environmental standpoint.”

The park of more than 70,000 acres sits atop the Bakken shale, an oil-rich rock formation that for decades frustrated drillers who could not coax anything profitable from the ground. But advances in hydraulic fracturing and directional drilling have unlocked huge amounts of petroleum here. North Dakota is now the second-biggest oil producer in the U.S. after Texas.

The park’s landscape is a showcase for the state’s varied terrain. It has steep-sided barren buttes dropping into grassy valleys, as well as tall sandstone formations and rock layers that reveal tens of millions of years of natural history. The wildlife includes bison and horses, yipping prairie-dog colonies and elusive mountain lions.

In this “desolate, grim beauty,” Roosevelt found solitude and built a cattle ranch. Later in life, he said he would not have become president without the healing time spent in the Badlands.

Society’s footprint has drawn ever closer to the wilderness as trailer parks are established to house oil workers and tanker trucks carrying drilling chemicals and water crowd once lonely roads.

During the day, it can be difficult to spot oil development in the distance. But at night, the flares and oil field lights brighten the horizon. At times, park Superintendent Valerie Naylor says, it’s possible to see 26 natural gas flares from the park.

The gas is a byproduct of oil production and a valuable resource on its own. But with no systems in place to capture it, store it or transport it, some oil producers simply burn it off.

In March, North Dakota burned off 33 percent of its natural gas. Nationwide, around 1 percent of natural gas is flared, according to the U.S. Department of Energy.

“Luckily, that is a resource that can be recovered. If you turn off the lights, you get the night sky back,” said Eileen Andes, the park’s chief of interpretation.

Some visitors have reported hearing the sounds of the oil industry deep inside the park. The Little Missouri River and the park’s canyons can amplify noise from miles away, making the development seem even closer.

The park, which is just a small slice of the Badlands, is surrounded by the Little Missouri National Grasslands, which is managed by the U.S. Forest Service.

Unlike national parks, Forest Service lands can be used for oil and gas extraction. Nearly all of the area is currently leased for oil and gas development and more than 600 wells have been drilled, according to Babete Anderson, a spokeswoman for the grasslands area.

Expanding oil activity in the years ahead will probably alter the character of the grasslands.

“If you put 29 well bores on every 2 square miles, it’s industrial. It’s not the Badlands anymore,” said Jan Swenson, executive director of the Badlands Conservation Alliance.

Park officials do meet with oil companies to talk about mitigating the effects of drilling on the park. They also consult with the North Dakota Industrial Commission, which approves oil developments.

Park managers have successfully convinced some companies to either relocate or abandon projects that might have been detrimental to the park, Naylor said.

“We do want to make it clear that we are not anti-oil development,” Andes said. “But we think it can be done in a way that doesn’t affect park resources in a negative way.”

North Dakota currently has more than 10,000 wells producing oil, with many more coming. For those fighting to conserve natural places sitting on top of oil reservoirs, the scope of development presents an uphill battle.

“I don’t have optimism,” Swenson said, “I have hope and persistence.”