Oil Trains at Junction in North Dakota By Chester Dawson 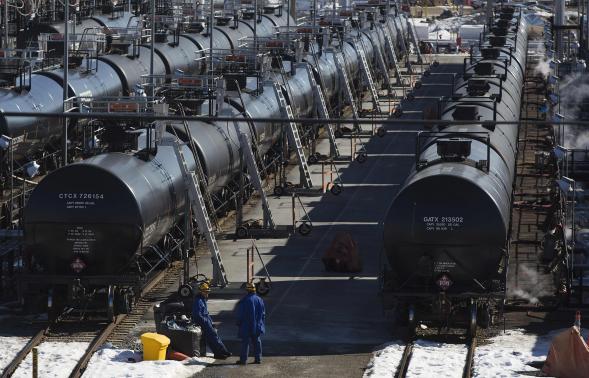 Oil producers in North Dakota are expected to face new regulations soon on treating their crude oil if the state’s chief energy regulator follows through this week on promised standards aimed at ensuring that Bakken Shale crude oil can be more safely shipped by rail.

The North Dakota Industrial Commission will meet on Tuesday to complete steps it proposed last month that would require oil companies as of Feb. 1 next year to start removing volatile gaseous compounds before shipping their crude on railroads crisscrossing the country.

The commission’s decision will be closely watched because critics say the proposals don’t go far enough while the oil industry has complained they go too far. North Dakota has felt pressure to act amid growing concern nationwide that Bakken crude poses a higher threat in a derailment or other accident.

Production of light shale oil through hydraulic fracturing, or fracking, makes up the majority of the additional three million barrels a day of oil that the U.S. produces today compared with 2009. Much of that is shipped by rail, especially crude produced from Bakken Shale because of North Dakota’s lack of pipelines.

Some activists in North Dakota and a growing chorus of leaders in local municipalities and other states have raised questions about the safety of Bakken crude-by-rail shipments in the wake of a series of fiery train explosions, including one in July 2013 that killed 47 people in a Quebec town.

North Dakota’s move toward mandating the stabilization or treatment of oil before shipment has been met with resistance from many producers in the state, who say it poses an unnecessary burden on the industry at a time when profits are being squeezed from a drop in global crude prices.

“We’re anxiously awaiting to see what the language looks like,” said Kari Cutting, vice president of the North Dakota Petroleum Council, an industry lobby. “With the reduction in crude oil prices, we should be mindful of the regulatory impact of what [the state’s] trying to accomplish,” she said.

The proposals would require heating oil in the field to remove dissolved gases such as butane and propane from the liquid. That would lower the vapor pressure and decrease the risk and size of a fireball if a railcar is punctured, a possibility North Dakota officials had previously played down.

Many lighter crudes produced by fracking contain elevated levels of highly volatile gases, including those recovered from the Eagle Ford shale formation in Texas. But unlike the Bakken’s light oil, Eagle Ford light crude is routinely stabilized before being shipped out by pipeline or rail to refineries.

The Wall Street Journal reported in February that based on an analysis of data collected at a pipeline in Louisiana, Bakken Shale had a far higher vapor pressure–making it much more likely to emit combustible gases–than dozens of other crude oils.

Since then two industry-funded studies have attempted to debunk the notion that Bakken crude is more volatile than other types of oil. But some industry experts have questioned those studies’ findings, saying they used outdated and unreliable crude testing methods to measure vapor pressure levels.

As a result of those concerns, both U.S. and Canadian federal authorities have ordered new crude oil tests using methods designed to prevent dissolved gases, known as light ends, from escaping before and during testing.

Bakken oil producers have sought to modify the planned rules by petitioning the North Dakota Industrial Commission, some submitted minutes ahead of a comment period deadline six days after the proposals were announced on Nov. 13.

Among other things, the industry wants to delay the implementation date, adopt a target instead of a maximum limit for vapor pressure and allow the use of older crude testing methods. But supporters of tougher regulations on oil shipments have urged the state not to scale back its initial draft order.

“I certainly hope they don’t backtrack,” said Sen. Connie Triplett, a Democratic state legislator in North Dakota who registered her concerns about crude volatility in testimony before the North Dakota Industrial Commission in September. “We have to start somewhere and this is a reasonably positive first step,” she said.

The Week Ahead looks at coming corporate events.