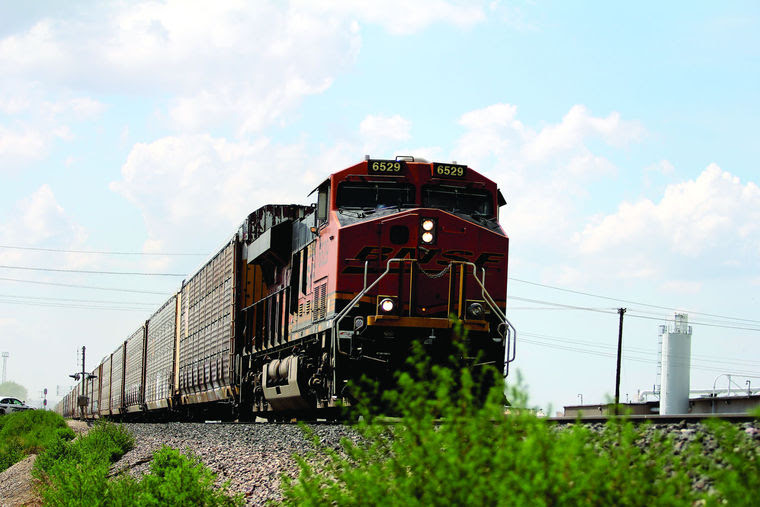 As many as five CSX Corp. trains carry oil from the upper Great Plains’ Bakken shale fields into Boyd and Greenup counties in northeastern Kentucky. A similar number rolls through Henderson, Webster, Hopkins, Christian and Todd counties in the western part of the state. In all, CSX sends the trains along more than 200 miles of track in Kentucky.

WDRB-TV in Louisville reported that the trains bypass the state’s largest cities, but skirt areas along the Ohio River near the Ohio and West Virginia borders and pass directly through Henderson, Hopkinsville and other cities in western Kentucky.

Until earlier this year, railroads had no obligation to notify communities where large quantities of that oil rumbled past their schools, homes and businesses. The limited disclosures shed some light on the routes of trains carrying flammable oil extracted through hydraulic fracturing, or “fracking,” of rock formations in North Dakota.

“They don’t tell us what days, what cars — other than it’s going to be a million gallons,” said Larry Koerber, Henderson County’s emergency management director. “And they’re only doing it because they’re required by law.”

In May, the U.S. Department of Transportation ordered railroad companies to inform each state in which individual trains carry 1 million gallons of Bakken crude oil. The move came after several derailments in the U.S. and Canada “demonstrated the need for emergency action to address unsafe conditions or practices in the shipment of petroleum crude oil by rail.”

Oil-by-rail shipments have increased in recent years as oil is extracted from an area where the existing pipeline network can’t keep up with demand. There were 407,761 carloads of crude oil shipped last year in the U.S., up from 9,500 in 2008, according to the Association of American Railroads.

Federal inspectors have determined that Bakken is more flammable than other crude oil — a result of a higher gas content, lower flash and boiling points and a higher vapor pressure — and the tank car most commonly used to ship it is “not an adequate container” if a derailment occurs.

CSX is the only railroad operator in Kentucky with oil volumes large enough to warrant telling the state.

The company has agreed to safety measures, including new braking systems for trains with at least 20 carloads of crude oil; increased inspections of rail lines carrying longer trains; lower speeds in congested areas; and funding for first responders. A company spokeswoman said in a statement that CSX met a July 1 deadline for more track inspections, lower speed limits and installing monitors to detect problems with train wheels.

The company asked all states through which it ships Bakken crude to agree to withhold some information from the public, according to the Virginia Department of Emergency Management.

In Todd County, near the Kentucky border with Tennessee, the same railroad runs through Trenton and Guthrie, said Tim Pulley, the county’s top emergency management official. Those cities account for about 15 percent of all residents of the 12,500-person county, according to U.S. Census Bureau estimates. Pulley said he was unaware that trains carrying crude oil were passing through Todd County until he met in early August with CSX officials.

“The track goes right through the heart of both of them,” Pulley said. “That’s a big chunk of our population.”

A CSX train derailed on the line near Guthrie in 2011, sending as many as 20 cars into nearby fields but causing no injuries.

Christian County emergency management director Randy Graham said he has requested 19 copies of oil-train education videos from CSX to give to fire departments in the area.

“We’ve just got to have a lot more area that would have to be partitioned off and people evacuated and that type of thing,” Graham said.