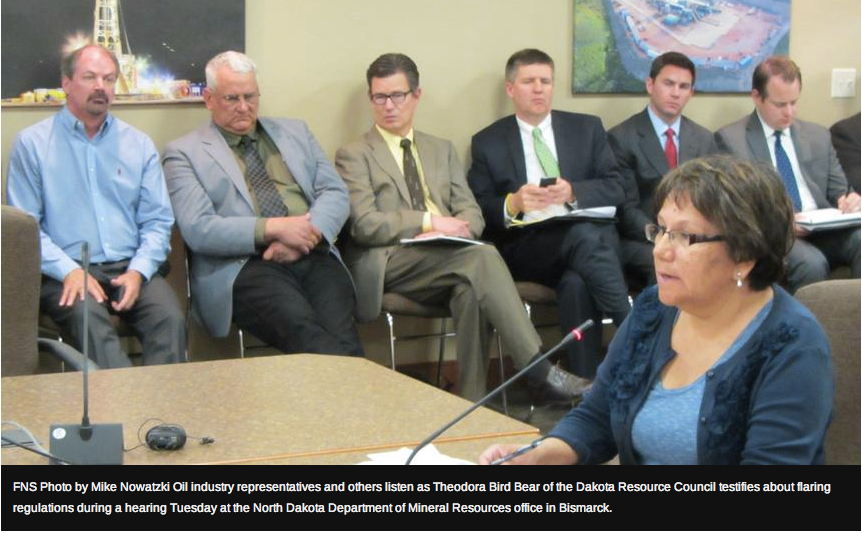 Standing room only at a hearing on new state regulations to curb natural gas flaring.

The proposed rules would spell out when and where the state Department of Mineral Resources can temporarily reduce production at an oil well to reduce gas flaring. The Department says the existing rules were in place before the Bakken boom — and don’t work for the current situation.

Some oil companies were present to listen.

“We’re here to make sure it is a responsible way to approach the flaring problem,” said Statoil’s Russell Renkin. “It’s not an easy fix.”

“Through that gas capture plan, they (the Dept. of Mineral Resources) can work with individual operators to determine if we’re not meeting the targets,” said Ness. “These policies are only necessary if individual operators aren’t following the guideliness. That’s better than a ‘one size fits all’ regulation.”

“We want them to enforce air quality in western North Dakota,” said Theodora Bird Bear, who chairs the Dakota Resource Council’s Oil and Gas Task Force. “There should be only three instances where flaring can occur — emergencies, production testing and purging. Other than that, there should be no flaring.”

Wayde Schafer of the Sierra Club says he’d like the discussion focused on the actual amount of gas flared, and not a percentage. He says the percentage may go down, but with more wells coming on line, the amount of flared gas increases.

The Department of Mineral Resources hopes to have new rules in place by June.