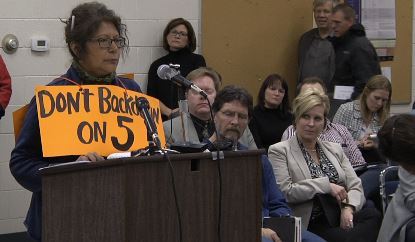 People Sound Off About Radioactive Waste Limits in North Dakota

The public had a chance to speak up tonight about the level of radioactive material the state should accept in landfills.

The Department of Health is hosting public hearings about new TENORM rule changes.

Proposed rules would raise that limit to 50.

Some say radiation can be found in every day items–and that science supports the new limit.

Others say that any increase in radioactive waste can cause harm.

“There’s no safe level of radiation exposure.  Do you guys want to explain to me my recommended daily allowance?  The fact is none. There is a reason we don’t have new nuclear power plants in this country because if you can’t taste it, and you can’t smell it, and it’s going to kill you, and it lasts 13 million years…” says Winona LaDuke, White Earth Reservation

“We absorb much more radiation than those picocuries are producing on a daily basis from every day activities.  Whether it’s flying in an airplane…To standing next to a granite counter top.  The list goes on.” says scientist Jay C. Almlie

The public has until February 6th to send written comments to the Health Department.