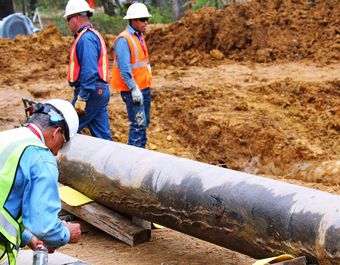 Picture of ExxonMobil’s ruptured Pegasus pipeline that spilled Canadian heavy oil in the town of Mayflower in central Arkansas, courtesy of The Duncan Firm.

Pipeline Alert From Federal Regulator Is First of Its Kind

Reversing oil and gas pipelines or changing the product they’re carrying can have a ‘significant impact’ on the line’s safety and integrity.

Reversing oil and natural gas pipelines or switching the product they’re carrying can have a “significant impact” on the line’s safety and integrity—and “may not be advisable” in some cases, federal regulators told pipeline companies in a recent advisory.

The alert is the first time the Pipeline and Hazardous Materials Safety Administration has officially cautioned the industry about potential safety threats from restarting, reversing or reworking pipelines to handle Canadian tar sands oil and the surge in U.S. oil and natural gas supplies. If not handled properly, those changes can increase the risk of pipeline leaks and ruptures, the Sept. 12 notice said.

The PHMSA bulletin validates the concerns of communities and pipeline safety experts who have pressed for more details and assurances about pipeline reversals and other changes. The proliferation of those changes has also frustrated environmentalists because they have provided routes for tar sands headed to the Gulf Coast in the absence of the Keystone XL pipeline.

PHMSA said the advisory was triggered in part by last year’s oil spills involving two reversed pipelines, ExxonMobil’s Pegasus tar sands line in Arkansas and the Tesoro Logistics line in North Dakota. Those accidents, as well as “other information PHMSA has become aware of” led the agency to issue the alert, the bulletin said.

While the notice doesn’t include new regulations, it clarifies which tests, precautions and adjustments it expects companies to undertake before they make such fundamental changes to a fossil fuels pipeline. PHMSA said pipeline companies should consider conducting a water pressure test, known as a hydrostatic pressure test, especially in pipelines with previous failures or a history of certain kinds of cracking or corrosion.

The guidance is a sign that the agency believes its rules are being overlooked, misinterpreted, circumvented or ignored, according to Richard Kuprewicz, a pipeline safety consultant who has worked on the Pegasus case and others.

“What PHMSA’s saying is ‘Look, we’re seeing too many projects where you’re changing the service, changing the flow direction, and you haven’t done adequate integrity management,'” said Kuprewicz. “That’s my interpretation of it.”

PHMSA spokesman Damon Hill said the advisory “is explanatory in nature and is provided to offer recommendations…and to help operators making those operational changes understand how to comply with the regulations.”

New pipeline projects that don’t include the suggested testing and precautions could face delays or additional review, especially in cases where PHMSA’s hydrotesting recommendation might apply. Reversal projects that involve problematic high-risk pipelines—such as those with manufacturing defects—could face greater scrutiny. The PHMSA bulletin noted that such projects “may not be advisable” under some circumstances.

Federal regulations do not require companies to get approval before they reverse a pipeline, change the kind of petroleum being carried, or convert a natural gas pipeline to carry liquids (or vice versa). And they don’t specify what tests should be completed before making the changes or spell out when a pipeline should be considered too vulnerable to undergo the planned changes.

Instead, a series of broad-brush rules apply, requiring pipeline owners to identify, remove or lesson any threats to their pipeline on an ongoing basis. Those regulations are intentionally vague to give pipeline companies broad latitude to tailor their risk assessments and preventative measures to the specifics of each pipeline.

“They’re giving you insights into what they’re looking for,” said an expert in pipeline failure analysis who didn’t want to be identified because of ongoing work with pipeline companies. “If you’re not doing those things, then you should have reasons for why you’re not doing them.”

Pipeline reversals used to be relatively rare. But the unexpected surge in U.S. oil and natural gas production in places like North Dakota and Pennsylvania has triggered unprecedented shifts in the pipeline network.

Among the projects that could be affected by the PHMSA advisory are:

The advisory comes too late for a long list of pipeline projects that were completed in the last several years. Two of those were cited by PHMSA’s bulletin because they subsequently failed.

Exxon’s Pegasus pipeline, which split open in March 2013, was built primarily from 1940s-era pipe known to be prone to seam cracks and other defects. The company reversed the pipeline’s flow, it switched to carrying heavier, denser Canadian dilbit, and it began pumping more oil through it. In announcing a proposed fine that Exxon is challenging, PHMSA said Exxon did not give sufficient weight to the pipeline’s inherent risks, among other things.

In the Tesoro case, the company reversed a North Dakota oil pipeline without changing the line’s pressure and flow-monitoring equipment to account for the reversal, according to PHMSA.

Hunton & Williams, a law firm that represents oil and natural gas pipeline companies, wrote in its blog that PHMSA its overstepping its bounds. “The agency appears to be issuing substantive legal rules under the guise of guidance,” the lawfirm wrote, adding that courts have ruled that regulators can only enforce what is explicitly in regulations, not what might be contained in advisories.

Kuprewicz, the pipeline safety expert, welcomed the agency’s guidance anyway because it prevents pipeline companies from continuing to cite outdated testing research and recommendations. PHMSA’s new guidelines may not be legally enforceable, he said. “But advisory bulletins are ignored by pipeline operators at their own risk.”