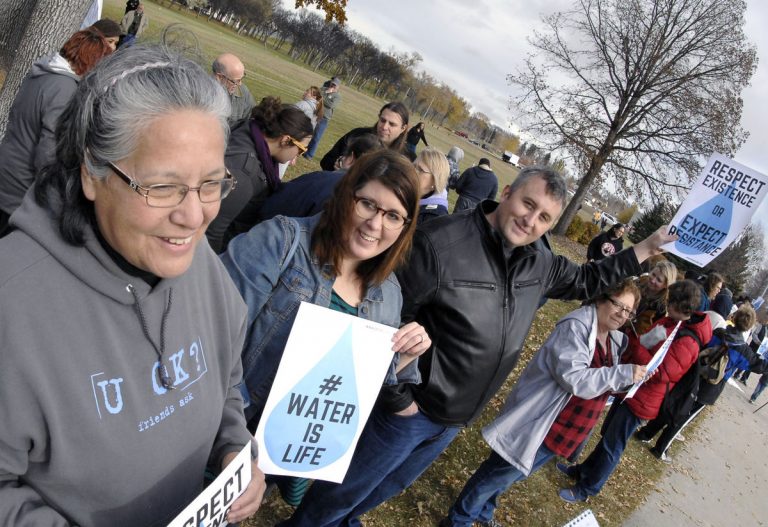 Attendance at a Capitol rally against the Dakota Access Pipeline Saturday was significantly lighter than previous events following police action this week to remove protesters from a camp established in the pipeline’s path.

But those opposing the 1,172-mile crude oil pipeline said the smaller numbers, which were expected to be between 75 and 100 people, do not take away from their message.

Organizer Kirsten Kelsch said protesters from the Sacred Stone camp had planned to come to Saturday’s Capitol rally but opted to stay in camp instead.

“They don’t want to leave the front line open,” she said.

Kelsch continued with Saturday’s event despite the change in plans because she felt it was important to inform people it’s not just the Standing Rock Sioux Tribe in opposition to the pipeline.

“We want to show community members it doesn’t matter what’s your race or where you’re from you have a place to come get your message out there,” she said.

The more widespread demonstrations are the more people will understand opposition to the pipeline is also widespread, according to Sarah Stewart, of Mandan, a rally attendee.

Rally attendee Ronya Hoblit, of Mandan, has been visiting the protest camps once a week and has attended other Capitol rallies. Since the protesters’ standoff with police Thursday, she said she feels like people are even more impassioned. She went to Saturday’s rally to continue voicing her support of the movement.

“Environmental issues are important; clean water is important now and forever,” she said. “It is a Native issue. but water is an everybody issue .… It feels like Native people have found their voice.”

Holding her own demonstration adjacent to the Dakota Access protesters Saturday was Darcy Peterson, of Bismarck, holding a Thin Blue Line flag in support of law enforcement.

“I want to show law enforcement that they’re supported in all of this,” said Peterson, adding she feels that has not been expressed enough during ongoing protest demonstrations.

The two groups stood in harmony without any conflict.

“They believe what they’re here for just like I believe,” Peterson said.

He said the state has not listened to people’s concerns over various energy industry projects.

“They listen to the oil companies, not ordinary folks,” Morrison said.

Morrison said DRC has been inspired by the protesters’ and wants to continue to lend its voice to the issue.

Reach Jessica Holdman at 701-250-8261 or jessica.holdman@bismarcktribune.com