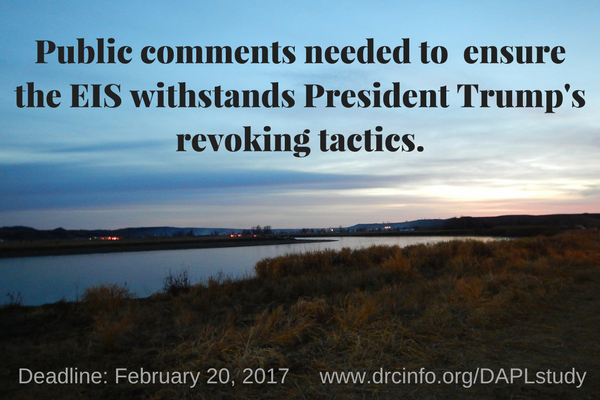 We succeeded in persuading the Army Corps of Engineers to do an Environmental Impact Statement (EIS) on the Dakota Access Pipeline (DAPL). Now, your comments are needed to make sure the EIS withstands President Trump’s revoking tactics.

On January 18, the Army Corps of Engineers (USACE) published a Notice of Intent in the Federal Register to complete an Environmental Impact Statement on the Dakota Access Pipeline. It called for public comments to be submitted by February 20, and for public hearings to be noticed in the Bismarck Tribune at least 15 days in advance. This was exactly what Dakota Resource Council members have been asking for and is a significant victory!

The fact is that public pressure on the USACE was instrumental in their decision to require an EIS before granting the final easement to Energy Transfer Partners to cross Lake Oahe. Thousands of people called and wrote letters to USACE. Members of Dakota Resource Council have a history of opposition to DAPL: members voted to oppose DAPL in 2015 and resolved that DRC would continue to “work for protection of landowners, farmers, ranchers, all citizens, environments, water and lands that are impacted by the threat of destruction by pipelines.” Standing Rock Sioux Tribe expressed their opposition to DAPL’s route just north of the reservation boundary as early as 2014. But the developers of DAPL, Public Service Commissioners and state leaders ignored the opposition of Standing Rock and of ordinary citizens.

Your voice is urgently needed! Please call the Army Corps of Engineers at 202-761-8700 and urge them to complete the Environmental Impact Statement process.

Submit a public comment for the Environmental Impact Statement to Mr. Gib Owen at gib.a.owen.civ@mail.mil. Include “NOI Comments, Dakota Access Pipeline Crossing” in the subject line of your email. Specifically, they are looking for input on “1) alternative locations for the pipeline crossing the Missouri River; 2) Potential risks and impacts of an oil spill, and potential impacts to Lake Oahe, the Standing Rock Sioux Tribes’ water intakes, and the Tribe’s water, treaty fishing, and hunting rights; and 3) Information on the extent and location of the Tribe’s treaty rights in Lake Oahe.”

Thank you for your action!

We cannot let President Trump’s attempt to circumvent the Environmental Impact Statement process succeed. Together, our voices cannot be ignored!