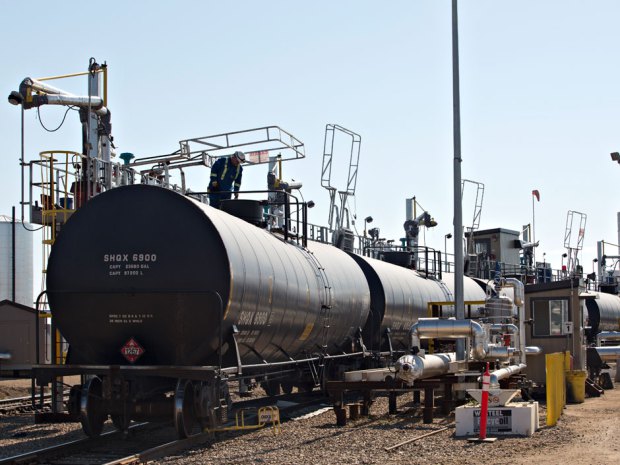 It’s no mystery among oil producers that their go-to tank car for moving crude to market — the model DOT-111 — is destined for extinction under proposed federal safety regulations.

But the older tank car keeps getting costlier with age, a point BNSF Railway Co. drove home last week with the announcement of a $1,000 price hike on using DOT-111s built before tougher industry standards took effect in 2011.

The rate change, first reported by Bloomberg on Friday, was confirmed by BNSF spokesman Mike Trevino yesterday and is set to begin in 2015.

The price hike will affect oil companies in North Dakota’s Bakken Shale play, where about 600,000 barrels of crude is moved daily by rail. BNSF is one of only two major freight railroads with access to the Bakken Shale; the other railroad, Canadian Pacific, introduced a similar surcharge on using older-model DOT-111 cars earlier this year.

Kari Cutting, vice president of the North Dakota Petroleum Council, pointed out that older-model DOT-111 cars still meet requirements under the federal Pipeline and Hazardous Materials Safety Administration. PHMSA is weighing a proposal to phase out the cars from most crude oil and ethanol service by 2017.

“Singling out crude oil from other flammable liquids to be penalized for movements in cars that still meet the current PHMSA code of federal regulations is a step backwards for all stakeholders,” Cutting said in a statement yesterday.

That hasn’t prevented railroads from steering shippers away from using DOT-111s whenever possible. Railroads, which rarely own the cars they ship, are free to adjust prices but are legally bound to accept tank cars that conform to PHMSA regulations.

Trevino of BNSF did not respond to questions about what motivated the rate change, but rival Canadian National Railway Co. has said it adjusted its freight rates at least in part because of safety concerns.

“For CN, tank car design is one of the most important systemic issues arising from the Lac-Mégantic rail accident,” said CN spokesman Mark Hallman, referring to a crude oil train derailment and explosion that killed 47 people last year in a small Quebec town.

Hallman would not comment on the specifics of the company’s pricing schedules, noting that “CN’s rates with customers are confidential.”

In BNSF’s case, a $1,000 shift could wind up costing North Dakota oil drillers at least 80 cents per barrel for shipping crude to East Coast refineries, according to Sandy Fielden, director of energy analytics at the research and consulting firm RBN Energy.

Fielden based his rough estimate on the assumptions that a tank car can hold 660 barrels of oil, a “unit train” of crude can make roughly two round trips from North Dakota to the East Coast per month, and BNSF’s price adjustment would be tacked onto lease costs that are tabulated monthly.

Shippers using CPC-1232 tank cars built after 2011 can avoid extra cost altogether. But order backlogs for the newer cars have stretched into the tens of thousands as shippers scramble to stay ahead of federal regulations and keep up with Bakken crude production growth.

“There aren’t enough new cars yet to take all of that burden, so somebody’s going to have to use the old ones,” Fielden said.

For “secondary players” that can’t afford new cars, “it’s kind of like when you have a bad credit rating: At the bank, they stick you with all these charges,” he said. “You just have to keep paying more.”

Fielden added that crude-by-rail shippers should be most concerned about price differentials among domestic U.S. crude varieties and foreign benchmarks, which ultimately determine whether paying a premium for rail transport is a worthwhile option.

He said a dollar or so tacked onto the per-barrel cost may make rail “less attractive,” but it’s hardly a “game-changer” for producers that must take to the tracks in the absence of pipelines or other alternatives.

“If you have a barrel of crude and you just dug it out of the ground, you’re going to get it to market in whatever way you can.”