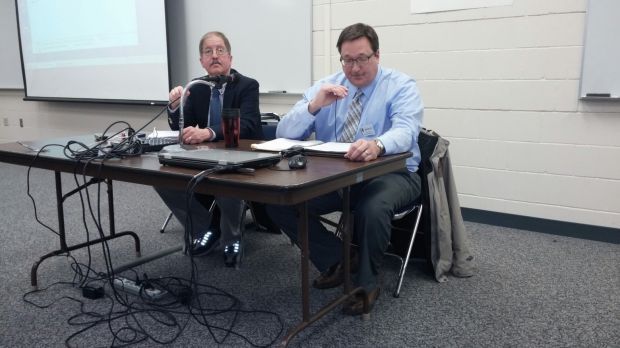 [colored_box color=”green”]Steve Tillotson and Scott Radig of the North Dakota State Health Department hear testimony about TNORM radiation disposal sites and radiation that should be allowed.[/colored_box]

A state Health Department plan to track and dispose of radioactive waste from the oil patch drew nearly 130 people to a two-hour hearing Wednesday in Bismarck. A majority who testified said the plan had serious gaps in public safety.

Signs against higher levels of TENORM — technologically enhanced naturally occurring radioactive material — at special landfill sites were taped to the walls of the Environmental Training Center and even hung over a few attendees’ necks.

Dakota Resource Council members and members of area tribes said the state Health Department had given inadequate notice and education about the plan to increase TENORM levels allowed at radioactive disposal sites from 5 picocuries per gram to 50. They demanded more hearings, saying the Feb. 6 deadline for comments was not enough time.

State health officials and representatives from Argonne Laboratories opened with a one-hour informational meeting explaining that 50 picocuries per gram was a safe radioactive level for a disposal site. Scott Radig, waste management director for the state Health Department, said TENORM is not regulated by federal agencies and enforcing its standards is left up to the states.

“You told me that the industry came and asked you for this. I know no North Dakota citizen came to you asking for an increase in radioactivity to poison themselves, their children or grandchildren,” said Joletta Birdbear, a member of the Mandan Hidatsa and Arikira tribe and a DRC member.

Gene Wirtz, a farmer  from Underwood, said the levels shouldn’t be raised. He said county commissioners voted against a radioactive waste site near his home.

Bill Sorenson, former Bismarck mayor, said there is technology available that can help protect the citizens from radioactivity from oil sites and added North Dakota can be a model for other states’ regulations.

Kathryn Hilton, of DRC, challenged the Argonne study because it used computer models instead of testing radioactivity levels from affected sites.

A meeting was held Tuesday in Williston and a third was to be held Thursday at the Fargo Public Safety Building at 4630 15th Ave. N.

Radig said the state health officials will consider extending the public comment and education period on the draft regulations.