Rally to support water protectors on Saturday in Bismarck 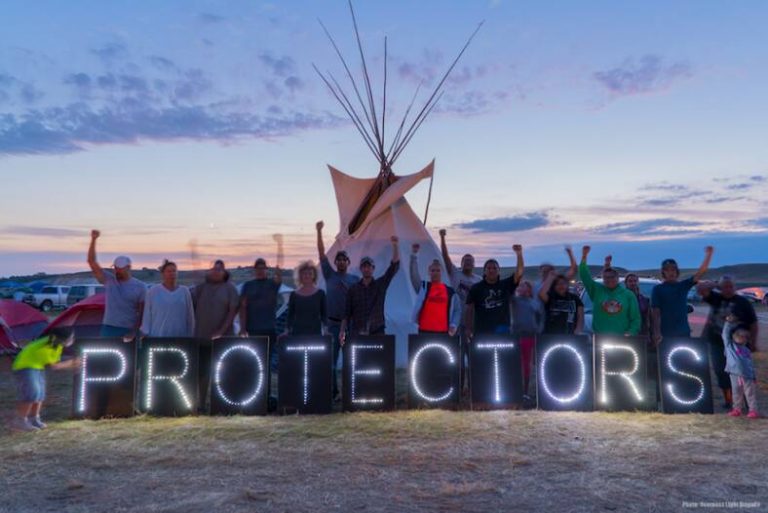 BISMARCK, ND – To show support and solidarity with water protectors at the front lines and the Standing Rock nation, Dakota Resource Council, along with regional activists Kirsten Kelsch and Caro Gonzales, is co-hosting the Rally to Protect Our Future. The permitted peace rally to show allied support will be at the Capitol in Bismarck this Saturday, Oct. 29.

“As landowners and North Dakotans, it’s easy to see the commonality we share with the water protectors,” said Linda Weiss, a landowner from Belfield and chair of DRC’s Oil and Gas Task Force. “We all love the land, have a deep appreciation for clean water as a vital resource for all life, and want to leave behind a positive legacy for future generations.

The rally begins at 1 p.m. and will feature a variety of allies, from landowners to community members, encouraging supporters from across the state to take action how they can. One of the confirmed speakers is Paul Seamans, a member of Dakota Rural Action in South Dakota who successfully fought the Keystone XL Pipeline.

“About six years ago, we started attending meetings with grassroots native groups to form alliances in order to stop the KXL, which have endured, grown stronger, and carried forward into the DAPL fight,” said Seamans. “Many of those leaders are also actively involved in the effort to stop the DAPL – for example, the Rosebud Spiritual Camp was started with prayer, just like Sacred Stone Camp. Protection of our drinking water and pushing back on governments that do not listen to the people are key elements in both of these fights.”

Both Dakota Resource Council and Dakota Rural Action, membership-based, grassroots organizations, have formal positions against the Dakota Access Pipeline. In 2015, DRC membership passed a resolution that opposed the DAPL and pledged that the organization “will work to ensure waters which lead elsewhere will not be jeopardized, will work to protect landowners, farmers, ranchers, all citizens, environment, water, and lands impacted by pipelines.”

In 2016, DRA membership passed a resolution in support for Standing Rock and clean water. The resolution spoke of issues raised “including the bullying use of eminent domain, a lack of proper consultation with the tribes, lack of a proper cultural resource survey, longstanding treaty rights, and above all the protection of our water – a leak into the Missouri River would not only affect Standing Rock’s water but potentially the drinking water of 60% of South Dakota’s population through numerous rural water systems.”

The goal of this rally is to activate allies in other parts of the state, as well as serve as a visible source of allyship and to make space for healing within the community. In the face of an escalated and militarized response from law enforcement and a malicious disregard for the important work of the press on scene to document what’s happening, the need for allies to speak out and take action to compel local and state leaders to intervene is more critical than ever.

“We are gathering to remind everyone in the community and the state officials that this issue is about protecting our environment for the future of our state, river and earth. It’s very important that we hit home that we water protectors are from all walks of life and encompass many races,” said event organizer Kirsten Kelsch. “Although direct action protesting might be annoying to some, it is nonviolent. We do it to slow down the opposing side and to get our voices heard. We also want to shut down the propaganda being forced on the community that the water protectors are inherently violent. They do not deserve to be treated with disrespect and violence by police who occupy the front lines.”