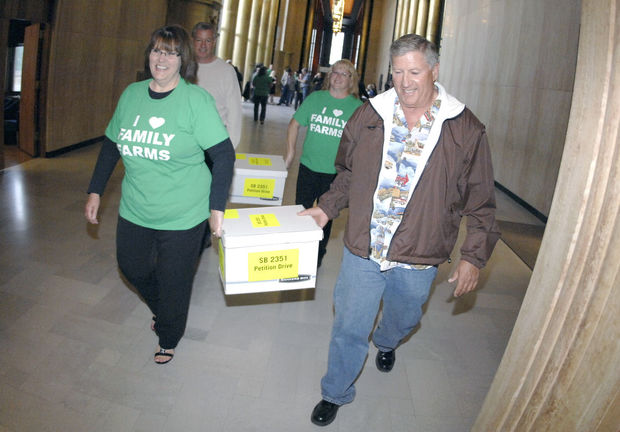 [colored_box color=”green”]Lori Carlson, left, and Roger Zetocha, front, and Perry Brown and Denise Brown carry two boxes containing more than 21,000 petition signatures to the secretary of state’s office in the state Capitol on Tuesday in Bismarck. The petition is to refer the recently signed law providing an exemption from North Dakota’s corporate farming ban. [/colored_box]

6.21.15 Forty-six members of Dakota Resource Council joined 250 volunteers from NDFU, The Catholic Conference and the Independent Beef Association of North Dakota in circulating the petition.

North Dakota Farmers Union gathered more than 21,000 signatures in 75 days in an effort to send corporate farming exemptions to the ballot box.

NDFU and its 41,000 member families had until Thursday to submit 13,452 signatures to the secretary of state’s office for a referendum of recently passed exemptions to the state’s 1932 corporate farming law.

Gov. Jack Dalrymple signed the exemptions into law in March. They were set to go into affect Aug. 1 but will be delayed until the June 2016 vote.

The exemptions allow for corporately structured dairy and swine operations, with at least 50 cows or 500 swine on up to 640 acres. Law currently allows family corporations and 15-member LLCs.

Secretary of State Al Jaeger has 35 days to certify the signatures and decide whether the issue will go on the ballot. Jaeger’s office said it will likely take the full 35 days to allow as many of the petition signers as possible to respond to the office’s inquiries.

During that time, NDFU will be developing a campaign strategy, Mark Watne, president of the organization, said Tuesday.

Supporters say the law will increase access to capital to cover expensive startup costs by allowing farmers to partner with non-family community members. Opponents say it will drive up the cost of land, shutting out family farmers.

“While some folks want to see changing the corporate farming law as the only real solution to developing animal agriculture in the state … the vast majority of our state’s citizens do not share that opinion,” said Watne, adding that a new business system is not the answer to declining dairies, suggesting, instead, dairy margin insurance or development of value-added processing facilities.

Watne said he does not know who or what organizations might lead opposition to the ballot measure.

“We want to give a big thank you to North Dakota Farmers Union and its members for stepping up to lead this fight for family agriculture,” Dakota Resource Council Board Chair Linda Weiss said in a statement.

Forty-six members of Dakota Resource Council joined 250 volunteers from NDFU, The Catholic Conference and the Independent Beef Association of North Dakota in circulating the petition.

(Reach Jessica Holdman at 701-250-8261 or jessica.holdman@bismarcktribune.com)