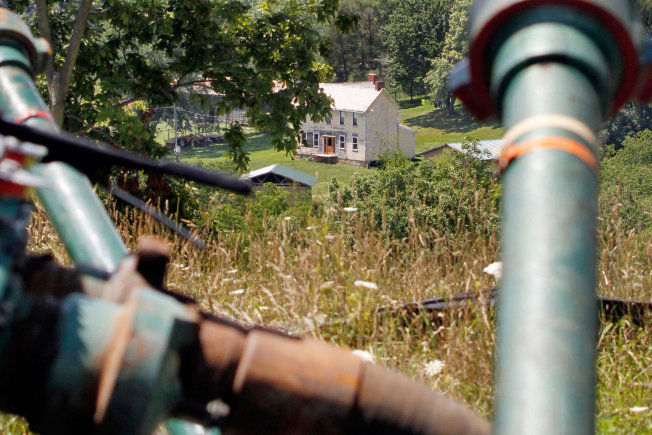 A Pennsylvania farmhouse is framed by pipes connecting to pumps being used to frack the Marcellus Shale. A new survey found that residents living near gas wells, including those being fracked, reported higher rates of health problems than those living further away.

Residents who live within a kilometer of an active well reported having far more health conditions than those who live further away.

Within 1 kilometer of a gas well, researchers say, residents had up to twice the rate of health problems per person compared to those who lived 2 kilometers away or further.

“I would have some concerns about being located less than a kilometer from a natural gas well,” says Peter Rabinowitz an associate professor at the University of Washington and the study’s lead author. “I would want to monitor the health of the people in the household. ”

Almost since the start of the U.S. domestic energy boom in 2003, residents and advocacy groups have tied a range of health issues to oil and gas drilling. The process of hydraulic fracturing, or fracking, which uses jets of water, sand and chemicals to crack open underground oil and gas deposits, has attracted particular concern.

Limited studies have corroborated the health claims: methane and toxic chemicals have been found in drinking water as far as a kilometer from a well site, and narrow surveys and case studies have found higher rates of skin, respiratory, neurological and gastrointestinal problems among people living near gas wells.

Researchers from the University of Washington and Yale University set out to conduct a more through study.

Over two years, they surveyed and then analyzed the responses from 492 people in Washington County, a rural stretch in southwestern Pennslvania that has more than 600 active gas wells drilling into the region’s enormous Marcellus Shale. The study focused on residents with ground-fed water wells.

The findings: Among those living within a kilometer of the wells, 13 percent reported skin problems like irritation, burning, itching and hair loss, and 39 percent said they had sinus problems, sore throats, itchy eyes and nose bleeds.

A sign warns people away from an artificial pond in April 2012 outside a fracking site in Pennsylvania. Toxic wastewater from fracking is often stored in so-called “tailings ponds,” and chemicals that evaporate from the pond – or leak into the drinking supply – may have been a factor adding to residents’ health issues, researchers say.

Researchers controlled for potential biases in the study, including age, gender, smoking, education, whether there were pets in the households, and whether residents were aware of environmental risks nearby. Interviewers did not even mention natural gas wells as they conducted the surveys.

“We really went into this with an open mind,” Rabinowitz says. “We find there is enough evidence to really look further into what really could be going on. This study supports the need for some precaution and some further investigation”

America’s Natural Gas Alliance and the American Petroleum Institute referred questions to another industry group, Energy in Depth, which dismissed the study out of hand.

“There are so many holes in it,” spokeswoman Katie Brown says. “They didn’t do any testing before drilling, they don’t have any evidence from before the drilling.”

She adds: “I was wondering if it’s even a story because they keep saying over and over it’s a hypothesis rather than a conclusion.”

The Pennsylvania Department of Environmental Protection did not return email inquiries. A spokeswoman for the state’s Health Department, who said the agency had not been given a copy of the report before its release, says the department “would be happy to review any data [the researchers] have gathered.

Workers change pipes on a drilling rig exploring the Marcellus Shale in Pennsylvania in April 2012.

Environmental advocates welcomed the findings, which were released three weeks after more than 400 doctors and nurses called on the state Health Department to better respond to and assess reported health problems associated with oil and gas mining.

“It’s great to have new evidence that – well, it’s terrible – but it’s great to have more evidence backing up something that I think we’ve known for a while,” says Adam Garber, field director for PennEnvironment, which has opposed natural gas drilling in the state. “If you live near gas drilling operations, you are going to impact your quality of life and the health of your life and your family by the very nature of living there. This report just backs up the anecdotal evidence that’s been out there for a long time.”

Rabinowitz and senior author Meredith Stowe, an associate research scientist at Yale, emphasized that the findings are still preliminary. Nevertheless, Stowe says, “There’s a hint of something here, and we think it should be followed up.”