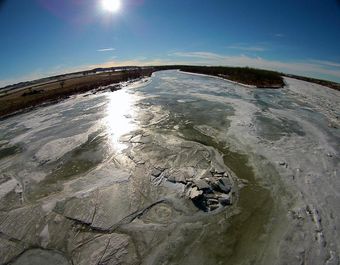 [colored_box color=”green”]Aerial picture of the site of the Yellowstone oil pipeline spill. On Jan. 17, Bridger Pipeline LLC’s Poplar Pipeline cracked under the riverbed and leaked up to 50,000 gallons into the water. Credit: Environmental Protection Agency[/colored_box]

Poor safety, defects may have added risks to pipeline that spilled up to 40,000 gallons of oil into the Yellowstone River.

The aging Poplar Pipelinethat spilled oil into the Yellowstone River in Montana on Saturday was built with pipe made using faulty welding techniques, and its owner has had a series of spills on the line. These two factors put the pipeline at a higher risk for problems.

First, the pipeline’s owner, Bridger Pipeline LLC, has had nearly double the number of incidents per mile of pipe than the average company with pipelines carrying oil, gas or other hazardous liquids over the last six years, according to data compiled by the Pipeline Safety Trust. Federal records suggest that most of Bridger’s incidents occurred on the Poplar line and were preventable.

Second, more than a third of the pipeline’s steel segments were fused in the early 1950s using low-frequency electric resistance welds (LF-ERW), according to a recent federal filing by Bridger. Company spokesman Bill Salvin said the segment under the river was replaced in the late 1960’s or early 1970’s, but he didn’t know what type of pipe was used.

Pipe that was made before 1970 using the LF-ERW method is considered more vulnerable to cracks and dangerous imperfections along the lengthwise seams. The same faulty manufacturing method set the stage for ExxonMobil‘s 2013Pegasus oil spill in Arkansas. With heightened vigilance and careful operation, pipeline companies can safely operate those lines, according to pipeline experts.

The cause of the Poplar Pipeline spill is not yet known, so it’s unclear if manufacturing flaws or some other preventable condition played a role. Parts of the Yellowstone River are covered with ice up to two feet thick, a factor that hashindered clean-up efforts and will likely delay removal and inspection of the failed pipe.

The spill, which leaked as much as 40,000 gallons of crude and fouled the drinking water for 6,000 residents of nearby Glendive, came just days before this week’s Senate hearings to bolster support for the Keystone XL oil pipeline. Opponents have pointed to the Poplar oil release as a fresh example of the hazards of crude oil pipelines that cross waterways. The Keystone XL crosses more than 1,900 rivers, streams, and reservoirs—including the Yellowstone River, said Scott Bosse, Northern Rockies director for American Rivers, a national advocacy group.

The Poplar is the second crude oil pipeline to foul the Yellowstone River since 2011, when Exxon’s Silvertip Pipeline poured 63,000 gallons of oil into the river’s flooding waters. The Exxon spill triggered federal and state fines, lawsuits from landowners, and a review of all fossil fuel pipelines crossing the Yellowstone.

“The second major spill in the Yellowstone River in just four years raises our concern about building the Keystone XL pipeline,” Bosse said in a statement. “This latest incident should serve as a stark reminder that there is no completely safe way to transport oil over long distances.”

The portion of the Keystone XL project that’s still pending would carry Canadian diluted bitumen from the U.S.-Canada border to Nebraska. From there, the heavy crude would travel through already-completed portions of the pipeline to the Texas Gulf Coast.

Opponents of the project believe completing the pipeline would trigger greater oil production from the tar sands region than there would be otherwise—adding more carbon emissions and worsening climate change. Others worry about the potential for spills along the pipeline’s route or object to the pipeline’s infringement on property rights.

The Poplar line, 12 inches in diameter at the Yellowstone River, can transport up to 42,000 barrels per day of crude oil from Northern Montana south to Baker, Mont. Company officials and spokesman Salvin have not provided answers to other questions about the Poplar Pipeline, such as its length, ownership history and uses over the years.

When it leaked, the Poplar was mostly carrying light crude oil from Wyoming and the prolific Bakken region in North Dakota, according to Salvin, the Bridger spokesman. Officials have estimated the spill size to be between 12,000 gallons and 40,000 gallons. Salvin said about 10,000 gallons of oil have been recovered from inside the damaged pipe.

The company said oil flowed out of the pipeline from directly under the riverbed, but the nature of the damage is unclear. However, because Bridger contractors were able to send a ‘smart pig’ inspection device through the damaged portion of the pipeline, the breach is probably not a large split along the pipe’s seam—the type of rupture that’s associated with LF-ERW pipe.

Exxon’s Pegasus pipeline, which is of similar vintage and manufacture as the Poplar Pipeline, split open along its lengthwise seam in an Arkansas neighborhood in 2013. Subsequent analysis concluded that the damage stemmed from manufacturing defects, but the company never determined what caused long-dormant cracks to grow undetected until the pipe ruptured.

In its annual report to federal regulators, Bridger said it operated 384 miles of pipelines, and that 186 miles, or 35 percent, were made from 1950s-era LF-ERW pipe. While Bridger owns four pipeline systems, most, if not all of the LF-ERW segments are on the Poplar system. The company’s Four Bears Pipeline is new and its two other systems are gathering lines that are not regulated by the federal Pipeline and Hazardous Materials Safety Administration.

The Pipeline Safety Trust, based in Bellingham, Wash., has used PHMSA reports to compile incident rates for pipelines carrying hazardous liquids such as crude oil. The group’s most recent calculations cover incidents from 2006 through 2013, and found that the average rate was 0.015 incidents per mile of pipeline operated.

Bridger, with 316 miles of pipelines and nine incidents during that period, had an incident rate of 0.028, according to Rebecca Craven, program director for the Pipeline Safety Trust. Combined, those incidents released 10,800 gallons of oil and caused $175,000 in property damage.

“One thing that’s notable is that, with the exception of one release in 2008, all of the causes were within the control of the operator,” Craven said. Of the eight preventable incidents, two involved corrosion, and the rest were caused by material, weld or equipment failures.

Between 2006 and 2014, PHMSA collected civil penalties of $145,000 from Bridger for rule violations. In addition, regulators proposed compliance orders four times and issued four warning letters, though some of those actions were later softened.