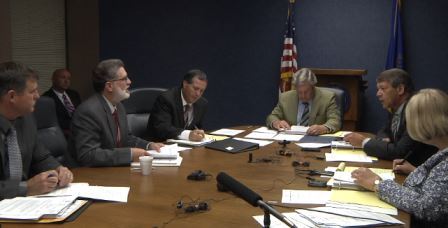 At this point in time, there are conflicting reports about the volatility of Bakken crude oil.

So, the North Dakota Petroleum Council has commissioned a study to develop a standard for the makeup of a Bakken Barrel.

But, its findings could also reveal even more about crude oil safety.

Oil conditioning uses temperature and pressure to separate water and gases from the crude oil itself– making the oil less volatile and safer for transport.

The state currently does not monitor oil conditioning.

“There are standards about how far the equipment should be located, how far it ought to be apart to avoid a fire hazard, but nothing with regards to temperature and pressure that it ought to be operating at to make sure that crude oil’s crude oil and natural gas is natural gas,” says North Dakota Department of Mineral Resources Director Lynn Helms.

But, the Governor has asked the commission to review an upcoming Bakken crude sample study.

“The initial point of the Turner, Mason study was to look at what pieces of equipment were being used and under what conditions to arrive at a barrel of oil that had a trademark that was ‘Bakken Oil’ and that that would be a marketable quantity,” says North Dakota Department of Mineral Resources Director Lynn Helms.

But, Helms says the samples and field operating conditions collected in the study could also be used to develop a model for conditioning Bakken crude. An understanding that could lead to safer practices.

“We should have been asking all along, ‘What is a Bakken Barrel, and then when it’s properly conditioned and safe for transportation what does it look like and how do you get there?’ ” says North Dakota Department of Mineral Resources Director Lynn Helms.

Governor Dalrymple says he hopes to review the information on Bakken Crude as soon as possible.

“We’ve got to get some type of a scientific basis here what is it we’re talking about here exactly and how do we standardize it and if necessary control it,” says North Dakota Governor Jack Dalrymple.

The Governor has asked the Industrial Commission to review the Turner, Mason results together next week.