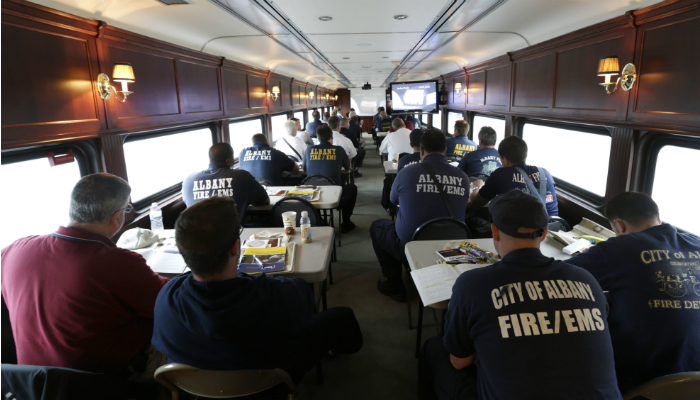 State to first responders: Stay back from burning oil trains

ALBANY—The state is urging first responders to stay away from burning oil trains if more than three cars are on fire and no human lives are at risk, according to documents obtained by Capital.

The state Office of Fire Prevention and Control recently revised its guidance for firefighters battling oil train fires. New York responders are now being advised by the state to stay back if an oil train derails and explodes, as trains have done in Virginia, North Dakota and Canada, where 47 people died.

“If NO life hazard and more than 3 tank cars are involved in fire, OFPC recommends LETTING THE FIRE BURN unless the foam and water supply required to control is available,” the document says. “Withdraw and protect exposures, including cooling exposed tank cars with unmanned monitors if possible.”

The U.S. and Canadian governments have determined the most frequently used rail car, the DOT-111, is prone to spills when it derails. Those cars have been involved in all of the most significant oil train accidents in the last year.

New York has had at least four oil trains derailments in the last year, though none has resulted in a fire or explosion. The state’s approach to fighting oil train fires echoes that of the federal Department of Transportation, which also released a proposal on Thursday that claims most first responders to oil train accidents won’t have the capacity to fight them.

“In the event of an incident that may involve the release of thousands of gallons of product and ignition of tank cars of crude oil in a unit train, most emergency response organizations will not have the available resources, capabilities or trained personnel to safely and effectively extinguish a fire or contain a spill of this magnitude,” the federal “Incident Management Reference Sheet” cautions.

In documents recently submitted to the federal D.O.T., state officials for the first time asked for a fee to fund the cost of supplying and training firefighters. Commissioners for the state D.O.T. and Department of Environmental Conservation estimated the cost of firefighting foam for each car would be about $40,000 and requested that Washington tax shippers to pay for emergency responders.

“Funding by the railroads, shippers or the federal government should be provided to local agencies along the routes of the crude oil trains so they have the proper training and response posture,” they wrote.