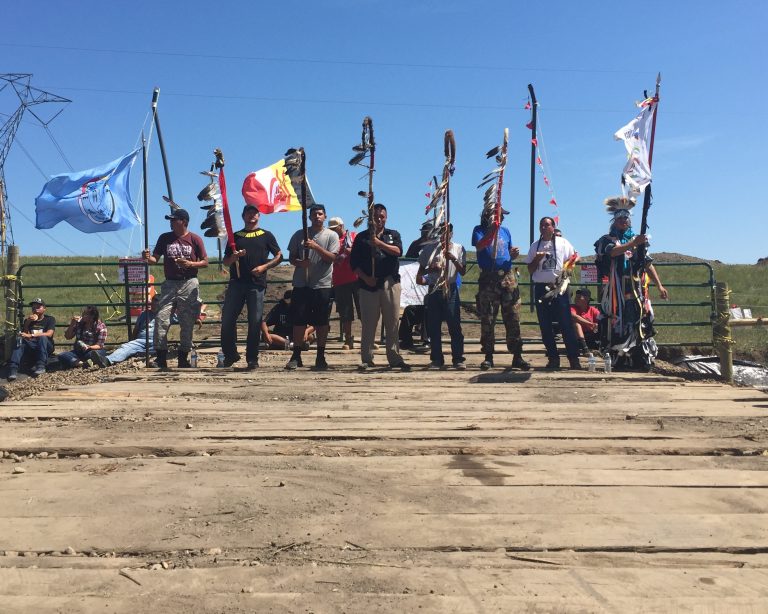 BISMARCK, ND – Dakota Resource Council stands in support and solidarity with the Standing Rock Sioux Tribe and all those who oppose the Dakota Access Pipeline.

DRC staff and members have been to the construction site to bear witness to this courageous demonstration, a rising voice of thousands of people, both native and non-native, who are rightfully concerned about the inevitable threat to one of the largest water supplies in the nation. We witnessed a peaceful demonstration of people across all ages, from babies to grandmothers. We met people from tribes across the country. We witnessed people taking care of each other – offering water and food, dropping off supplies, collecting trash so none was left on site. We heard prayer, we heard song, and we heard the calls and cries of concern that have been ignored. But most importantly, we saw people standing together in solidarity.

But a peaceful protest is not all that we witnessed. When we left the protest site, we also watched the installation of barricades on Highway 1806. We witnessed highway patrolmen documenting the license plates of people passing through.

We stand with Standing Rock for multiple reasons – to protect water, to protect landowners’ rights, to protect human rights, and to protect life. Impacts to communities downstream would be devastating to all of us who depend on clean water and clean soil, but we acknowledge that destructive projects like Dakota Access are often routed near reservations or communities that lack the resources and political power to fight them off.

DRC members adopted a resolution in 2015 that addresses the hazards of pipelines and the potential catastrophe of Dakota Access. Poorly constructed and substandard pipelines are a threat to water, land, human health, and ecosystems. Data shows that 60% of pipelines fail within the first 20 years of operation, and there is no assurance of quick response during crisis by governing bodies and industry officials. Current state officials have allowed multiple spills every day for years with little repercussions for companies whose leaky pipelines were responsible.

DRC has advocated for stronger rules and regulation during the past 10 years. It takes horrific events like Bear Den Bay and Black Tail Creek to get the attention of current officials. Still, neither one of those million-gallon spills have been cleaned up. Let’s not let that happen to our friends and family in Standing Rock or any other part of western North Dakota.

Dakota Resource Council commends the leadership of Standing Rock Sioux Tribal Chairman Dave Archambault II, who has continued to advocate on behalf of his people to demand that the U.S. Army Corps of Engineers require a full environmental impact study. The current construction route takes the pipeline less than one-half mile from the tribe’s reservation border, and sites of religious and cultural significance exist all along the route of the pipeline. Dakota Resource Council also supports the tribe’s request for preliminary injunction to undo the Corps’ approval of the pipeline.

ABOUT DRC: The mission of DRC is to promote sustainable use of natural resources and family-owned and operated agriculture by building enduring, democratic local groups that empower people to influence decision-making processes that affect their lives and communities.