STATEMENT: The time to listen to North Dakotans is now, Governor-Elect 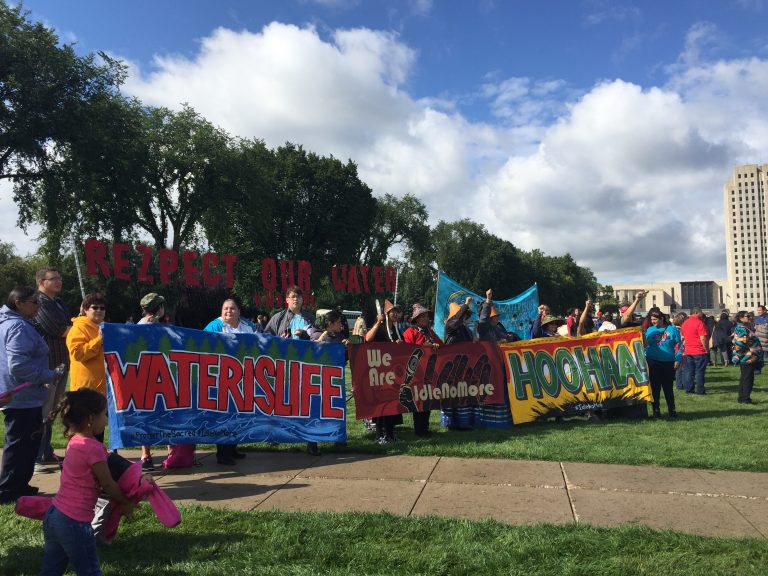 Now that the elections are over, our state can begin the process of moving ahead in a productive way with the Standing Rock Nation and Dakota Access Pipeline. Feeling dismissed and ignored by our elected officials isn’t a new feeling to people across North Dakota, who have experienced devastating impacts because of oil and gas development. Every day, citizens of this state live out parallel narratives of state government catering to the oil industry at the expense of public health, other livelihoods, and the legacy North Dakotans will leave to future generations.

“For 40 years, DRC members have worked together to bring the voice of people who live and work here into decisions on farm, rural community, and energy issues,” said Don Morrison, Executive Director of DRC. “We’ve never seen state officials cater more to oil company executives and ignore the consequences to the rest of us. Today, they just do not listen.”

The ongoing reality of being ignored by state government resonates with oil-impacted communities and landowners across North Dakota, who are dealing with chronic public health issues like oil spills, frack water spills, illegally dumped radioactive waste, and unending natural gas flares. DRC members have experienced firsthand dealing with the decision-making process of oil industry regulation – it’s currently designed to keep most people out. The people of North Dakota deserve to be respected by the people elected to serve our state.

Dakota Resource Council, a membership-driven nonprofit working to protect North Dakota’s natural resources, is calling on the Governor-elect to remove the barriers to resolving this situation. The Standing Rock Sioux Nation wants the pipeline rerouted. DRC supports this request, especially because a full environmental impact study was never completed. Projects like Dakota Access and the companies that bankroll them should never be allowed to take advantage of Nationwide permits that aren’t intended for such expansive infrastructure projects and don’t take into account potential cumulative impact.

“What non-Native farmers and ranchers and the Native community have in common is a connection to the land, a demand for responsible and accountable oil and gas development, and a desire to leave a positive legacy for future generations,” said Nicole Donaghy, Oil and Gas organizer. “They also believe in the right to clean water for people on Standing Rock as well as for the millions of people downstream.”

The state of North Dakota has spent more than $6 million on an overreactive, militarized police response that has brought a wide range of human rights violations along with it. North Dakota taxpayers shouldn’t have to fund this kind of wasteful and heavy-handed response that has resulted in making the situation worse. The entire nation has been watching while private security hired by Dakota Access used attack dogs on water protectors and sacred sites were destroyed. We have all watched as police, some from North Dakota, some recruited from out of state, unleashed tear gas, less-than-lethal rubber bullets, and sound cannons on water protectors who were nonviolently trying to protect sacred burial sites. The abuse of power to protect corporate profits over the will of the people has created an unnecessary police state on the prairie.

DRC sees the barriers as three-fold: physical, political, and social. State leadership can address these barriers and facilitate healing and forward- progress between the state of North Dakota and the Standing Rock Sioux Nation.

One of the first things the Governor-elect must do is take down the blockade manned by National Guard soldiers, which from its inception as an intimidation tactic has blocked access and reduced commerce to the Standing Rock Nation, prevented local residents from freely traveling, and has mainly served as a symbolic expression of the state flexing its muscle. Now is an opportunity for healing instead of fear.

2. Remove political barriers by going to the camps.

Take an active role, Governor-elect. Make the effort to learn more about things for yourself, rather than allowing and encouraging misinformation to spread. Make yourself available to tribal leaders and seek to meet with good intentions of respect and resolution. Acknowledge what our state and federal governments have done to the First Nations people of this country, and especially what traumatic events have occurred in this state. Listen and talk with people.

3. Create a de-escalation plan for the militarized police presence.

The social consequences of how the current administration has handled the Dakota Access Pipeline could extend for generations. If you take care to be culturally competent and you take the time to talk with people who are trying to protect the water, you’ll quickly understand how this simply is about clean water. But at the end of the day, it’s about so much more – it’s about broken permitting processes as well as about broken treaties. It’s about the state choosing to react on behalf of the oil industry and not on behalf of its citizens. Standing Rock was there before Dakota Access, and people will be living there in its aftermath. As Governor-elect, you can choose a direction of healing over harm.

Since 2015, DRC has had an official position on the Dakota Access Pipeline: “DRC opposes the Dakota Access Pipeline under current regulations and will work to ensure waters which lead elsewhere will not be jeopardized, will work to protect landowners, farmers, ranchers, all citizens, environment, water, and lands impacted by pipelines, and in the future will consider how each pipeline affects the land, air, water safety, the North Dakota plains, water, and human lives.”

In addition to removing physical, political, and social barriers, DRC calls for a coordinated effort, led by our state working collaboratively with tribal governments, to improve the processes by which pipeline infrastructure projects like the Dakota Access Pipeline are pushed through despite a lack of study on the impact to the environment and people nearby.