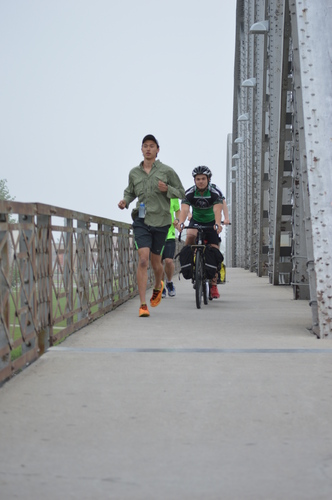 Edurance runner Caleb Kobilansky (right) confers with his support team Sunday morning in Grand Forks prior to the start of his Bakken Eco Expedition, which consists of a 360-mile run to Williston. Photo by Brandi Jewett/Grand Forks Herald.

Extreme runner Caleb Kobilansky and his support cyclist Justin Gerszewski travel Sunday over the Sorlie Bridge in downtown Grand Forks. The two men, along with another cyclist, will run and ride to Williston over the next two weeks to raise awareness about the oil boom’s effect on western North Dakota’s people and environment. Photo by Brandi Jewett/Grand Forks Herald.

Every day for the next two weeks, UND student Caleb Kobilansky will be running a marathon.

That’s the minimum distance the 21 year old will need to cover each day in order to reach Williston by June 15.

It’s all part of a 360-mile run across North Dakota called the Bakken Eco Expedition. Kobilansky and others seek to raise awareness about the impacts of the oil boom on western North Dakota’s people and environment.

“I’ve always been passionate about environmentalism as well as extreme sports so I thought I’d combine the passion,” Kobilansky said.

In addition to starting a conversation, the expedition crew has been raising donations for Ground Up Adventures, a local nonprofit focused on providing outdoor athletic opportunities to area children.

Gerszewski, a fellow UND student, will accompany Kobilansky and carry supplies for the pair, including food, water and camping supplies.

While some meals will consist of energy gels and chews, the crew also will dine on a protein and carbohydrate-filled delicacy: Ramen noodles mixed with peanut butter.

After five days on the road, Gerszewski will be replaced by Northland Community & Technical College student Tom Fisher. Fisher had originally intended to run with Kobilansky but a recent illness interrupted those plans.

The three men all face dangers when out on the road. Some stem from their bodies taking a beating from constant motion and being outside in the summer heat.

Others will come from the high traffic volumes they will encounter as they enter the Oil Patch.

“Traffic tends to get really dangerous so we’ll have to watch out,” Kobilansky said. “Additionally, I guess there has been a lot of concern about air pollution and dust in the air from the trucks driving.”

Though journey began on the North Dakota-Minnesota border, the crew wasn’t sure Sunday if they would be pressing on through Williston to the Montana border.

“We’ll see how brave we feel when we get there,” Fisher said.